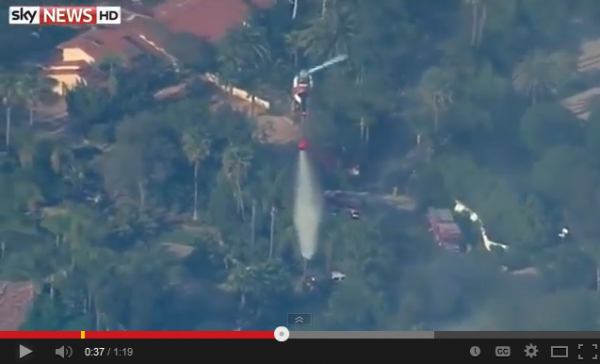 As surely as night follows day, a natural disaster will be followed by the assertions of environmental activists that it was caused by “man-made climate change.”

At this point, six of the now 11 wildfires raging through San Diego county are fully contained. And before the embers have begun to cool, California Governor Jerry Brown offered his eco-activist assessment of its cause.

On Thursday, Governor Jerry Brown asserted that it is settled that climate change is a factor in the wildfires now devastating parts of San Diego County.

According to a story in the U-T San Diego, the governor opined, “Despite what you may hear in Washington, climate change is a factor… This is not about theory. It’s not about politics. This is about fires on the ground, people’s homes.”

..Brown, a staunch advocate of climate change theory, recently confirmed that Los Angeles International Airport (LAX) is in danger of being overwhelmed by floods due to global warming.

Actually, it looks like some of the wildfires may, indeed, be “man-caused disasters.”

But not in the way Brown thinks.

The Bernardo Fire was caused by a backhoe:

A backhoe in use at a housing construction project near Rancho Bernardo sparked the first large wildfire to erupt in San Diego County this week, authorities reported Friday.

Investigators determined that the Bernardo Fire began as a crew was excavating trenches to test soil at the work site near Del Norte High School.

After digging and then covering one of the troughs, they started moving to the next excavation location, according to the San Diego Fire-Rescue Department. They then noticed flames spreading rapidly through dry brush and tried in vain to extinguish them before fleeing for their own safety, officials said.

And arson is a possibility for some others, especially as 2 young men were arrested for starting fires around an Escondido area park:

The public’s persistent questions about arson gained steam after 10 p.m. Thursday when Escondido police said they had taken two teenagers into custody for trying to start “at least two fires” that evening in south Escondido. Police did not link the 19-year-old and 17-year-old to the wildfires burning throughout the county, and a police lieutenant told U-T San Diego the pair are not believed to be connected to any of the North County fires.

And while the possibility of arson starting these fires remains speculation at this point, Carlsbad Fire Chief Michael Davis said, “Each fire will be treated as a crime scene until it’s proven to be accidental.” Additionally, officials are asking San Diego residents to be vigilant and local talk show lines are filled with those who are inclined to agree with the Fire Chief’s assessment, as the nature of these infernos is unlike that of previous wildfires.

In fact, one of the discussions involved an EMS and Fire map that highlighted the fire locations and noted that the fires were concentrated in the north with ready access to the freeways and highways (including the one I experienced earlier this week). 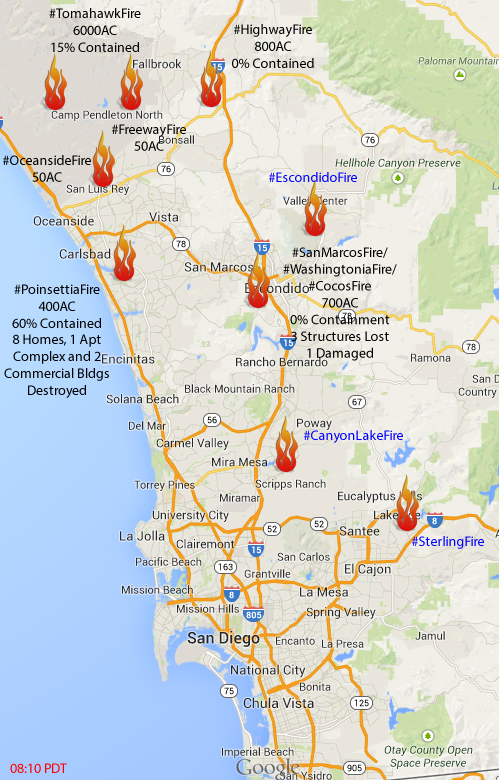 Two serious blazes are being battled at the Marine Corps Base Camp Pendleton:

Crews battled two fires at Camp Pendleton early Friday, including one that grew overnight from 600 acres to 8,000, according to base officials.

The fast-moving Las Pulgas Fire is 5 percent contained, base officials said. It broke out for unknown reasons about 3:15 p.m. Thursday near a sewage plant in the Las Pulgas area and has led to hundreds of evacuations.

The second fire being fought at Camp Pendleton today — known as the Tomahawk Fire — erupted for unknown reasons around 9:45 a.m. Wednesday and has scorched about 6,300 acres on the eastern outskirts of Camp Pendleton. Base officials said it was 15 percent contained.

And a third has just broken out at the Marine base.

Truly, we may be looking at a man-made, climate change disaster.

Climate Change cause people to commit arson. Science proves it

Indeed! I pronounce it “Settled”.

Although I was disappointed with Governor Brown’s statement, I have to recognize that he was only echoing what he reasonably thinks is the best scientific information available.

Jerry Brown is no scientist. He is obviously no mathematician, either. And, he listens to the pronouncements from such local scientific groups as Scripps Institution of Oceanography, San Diego, thinking that they are substantial and authoritative.

Scripps regularly and breathlessly reports changes in numbers of flora and fauna with the assumption that such populations have never fluctuated before, are incapable of moving to another location, and do not exist anywhere else in the world. These assumptions regularly lead to hysterical conclusions on the part of both Scripps and others, such as the need to preserve bait fish at the expense of farmers, and the need to preserve “vernal pools” — temporary rain puddles — as permanent wetlands.

Scripps also issues statements containing enormous, embarrassing mathematical and statistical errors. For example, Scripps announced that it would spend X amount of money upgrading weather reporting stations (a good idea) and then reporting the measurement error of its new, extremely accurate thermometers as if that number represented the entire experimental error of the readings. This is an enormous mistake, because it fails to account for the error of atmospheric mixing, which is inherent in the system, and cannot be improved by using better thermometers.

For example, every day the local newspaper in San Diego reports the daily temperature in San Diego as four separate ranges, totaling about 30 degrees Farenheit. This is due to the topography of the region, where ocean meets land, changes in altitude, and desert. While it is a good idea to take care with the quality of the measurements, the error in the system swamps any advantage obtained by a super-accurate thermometer.

Scripps also regularly publishes statements, carried by the local newspaper, to the effect that there is a consensus among scientists that global warming is occurring and is primarily caused by human activity.

With this background, it is hard to blame the governor for making scientifically unjustifiable statements.

Wildfires don’t spread that fast through forested areas that have been properly managed via “sustainable” logging, maintaining fire lines, and occasional controlled burns to keep dry underbrush (which forms the kindling for spreading fires) down to a minimum.

Coincidentally or not, these sound forest management practices are also most conducive to wildlife.

As an example, the great spotted owl scare of a couple of decades ago led to a battle where the idiot “environmentalists” wanted to stop logging in “virgin” forest areas because the owl was scarce. Later it turned out the owl thrives elsewhere – in forested areas adjacent to clear-cut areas, where the small rodents and other creatures which comprise its food supply flourish.

The errors in stopping logging and other sound forest management practices on public lands have never been fully reversed, so we have more frequent, larger, and more damaging wildfires as a result.

Not quarreling with your response, but because of it’s mission as a training facility Camp Pendleton’s vast wildlands cannot be managed the same way, else it destroys their usefulness for simulating foreign locales.
The biggest reason for the apparent sudden increase in fires is heavier fuel loads due to weather and ultra-low humidity, ie: the drought. Once the drought is broken the weather will change and fire seasons will return to normal. This is California. We have brush and forest fires. They were here long before the arrival of the white man. Live with it.

I know that, in the past, Al Qaeda has urged “lone wolves” to set large wildfires. Not saying that happened here. Just another possibility.

Possible but IMO unlikely. Each fire is thoroughly investigated. My BiL used to do some of that. If an origin is suspicious in nature they bring in all kinds of CSI staff to help.
Strangers lurking around remote areas (“remote”, not “unoccupied”) are seen, watched and reported/checked out. By strong-willed people with rifles and shotguns. 🙂

Camp Pendleton is a military base, replete with ongoing ground warfare training exercises. While not impossible to furtively negotiate, the chances of an unknown person having entered and set these are very slim, IMO. It’s fairly rugged country, and mostly coastal brushland, chaparral and scattered Oak woodland. Day and night I’ve seen alert trainees on duty in the remotest areas. Very skeptical.