Medical marijuana providers in Michigan are losing their assets–and their livelihoods. 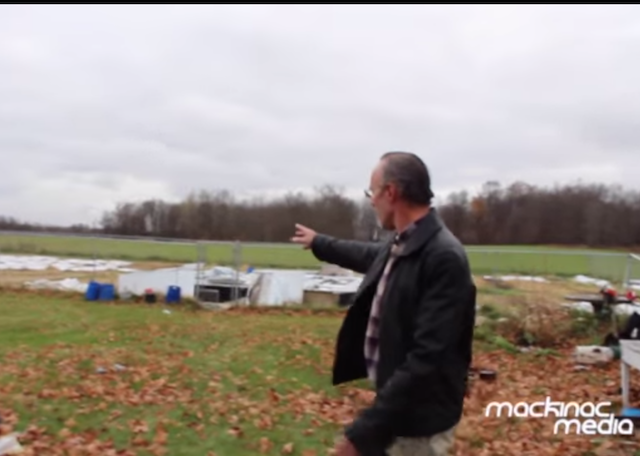 Back in August, the City of Philadelphia made headlines after their police department was busted using asset forfeiture procedures to pad city coffers. Now, officers in Michigan are under fire for targeting private citizens for forfeiture—without ever accusing those people of a crime.

Southwest Michigan residents and medical marijuana license holders Wally Kowalski and Thomas Williams both had their property ransacked and assets seized by officers over a year ago; neither men have been charged with a crime, but the police departments refuse to return their cash or belongings.

Kowalski has a license to grow and distribute medical pot to several low-income people who depend on the drug. He grows the plants in a garden area enclosed by a barbed wire fence.

But whether or not Kowalski had a legal right to grow mattered little to the state police, who seized his power generator—even though it had nothing to do with his marijuana plants—and some expensive equipment. They also destroyed the plants.
…
The police froze his accounts, rendering him unable to make payments on his student loans or other bills. And he could no longer complete the immigration process for his wife, a resident of Africa.
…
Thomas Williams, another southwest Michigan resident, suffered a similar ordeal. His medical marijuana activities prompted police to ransack his property while they left him handcuffed for 10 hours. The cops took his car, phone, TV, and cash. Afterward, he had no means of getting to the grocery store or even contacting another human being for days. Like Kowalski, he hasn’t been charged with a crime.

Fun fact: police officers ransacked Kowalski’s house for what we can only assume is evidence of his participation in a high-power midwestern drug cartel—but they didn’t confiscate his marijuana license.

It may seem odd that these men wish the police would just go ahead and charge them with something, anything, but as a practical matter it makes sense. Asset forfeiture hearings are largely controlled by prosecutors (whose offices benefit from the auctioning of seized property); if charged, Kowalski and Williams would be able to defend themselves in a court of law. As it stands, their livelihoods remain in limbo and their property remains a hostage.

Traditionally in Michigan, criminal fines were allocated to libraries, in part to avoid creating incentives that skew law enforcement more toward generating revenue than public safety. Asset forfeiture, however, is different. As a 2010 report from the Institute for Justice explained, “Law enforcement receives all proceeds of civil forfeiture to enhance law enforcement efforts, creating an incentive to pursue forfeiture more vigorously than combating other criminal activity.”

Those incentives contributed to more than $250 million in total forfeiture revenue being collected in Michigan since 2000. Reports from law enforcement agencies here show they collected over $20 million last year.

This has contributed to asset forfeiture becoming a revenue source for law enforcement agencies and big business in Michigan. Maj. Neill Franklin, a 34-year law enforcement veteran who led a drug enforcement team for the state police in Maryland, called the practice “extortion.”

“Today we’re taking property from people across this country and not charging them with crimes because we have no evidence on them that they are committing crimes,” said Franklin, who now serves as the executive director of LEAP (Law Enforcement Against Prohibition).

It’s not just a Michigan problem. Earlier this month, the New York Times exposed a disturbing trend of using police department “wish lists” to determine what sort of assets should be seized from suspected criminals. During seminars designed to train officers about forfeiture, attendees were instructed to focus on big screen TVs, cash, and nice cars; items like jewelry are computers are apparently too difficult to get rid of, according to instructors.

Note that in some states, officers are allowed to put seized items to personal use, which could explain why TVs and cars are seized, but marijuana licenses and other professional licenses are left alone. What we have here is policing for profit, and it might just be the single biggest threat to personal property rights in America.

should sue in fed court like people did for az immigration law stating that the state cannot be used to enhance,alter, or enforce federal drug laws.
see the heads explode.

I often bring this up to folks when discussing personal liberty and the erosion of rights (right to property and due process are serious rights) – and it’s very little known to most folks.

And our press (left or right) is often silent on this issue.

This is one of those things Conservatives at all levels of government could address with great popular support.

The injustice at work here…and there are MANY compelling stories of regular citizens victimized…really call out to be addressed.

Doesn’t seem fair that assets are seized with no charges filed! How can this be? If someone were to falsely seize my assets without charges, after a while, I’d give them plenty of charges. Plenty.

This is actually fairly typical in these cases.

imagine renting a trailer to someone and having that seized due to these laws due to that person dealing on the property?
we got lucky but it could have been a complete loss for us.

Civil forfeiture is a clear violation of the 4th amendment. It has to go. But somehow i don’t see the next congress doing anything about it.

No, it isn’t. The best proof that it’s constitutional is that it’s been used in US courts since the beginning of the republic, and nobody thought to challenge it. The people who wrote the constitution and the bill of rights had no problem with civil forfeiture, becuase it is a civil process, not a criminal one.

My thoughts: This technique of seizing a persons assets and then accusing the person was used during the Inquisition, Jewish pogroms, Third Reich, all types of genocide, etc. by envious greedy people. Did the Turks use this against the Greeks and Armenians 100 years ago? Perhaps…

In a sense, the same principle is used when the State comes into a home and takes children. Just a whisper in the right ear can destroy a persons life; while the ‘police’ show no interest in veracity. The real problem is America has become a lawless society, corrupt and rotten from heel of our foot to the crown of our head; from the police, to the judge, to the King (Obama). We are no longer a nation of laws.

I do not understand how civil forfeiture laws have survived judicial scrutiny. Irv is right. The Republican Congress should repeal this law at the federal level.

They use the legal fiction of charging the property with the crime. lower standard and the owner has to prove the property was not involved in, or the proceed from, a crime.
Sorta like the ACA “tax”

It’s a civil process against the property, not a criminal process. And the courts have allowed it since the very first days of the republic, so nobody can claim it’s unconstituitonal. It’s still deeply unjust, though, and Congress should end it.

To be truly honest, Bronco Bama really only promised that he wouldn’t prosecute the selling of, not growing the stuff. /sarc