Palestinian threats against Mohammad Zoabi and why there is no peace

Palestinian threats against Mohammad Zoabi and why there is no peace

He’s hiding in the U.S., while his anti-Israel Knesset member cousin is lionized in Western media. 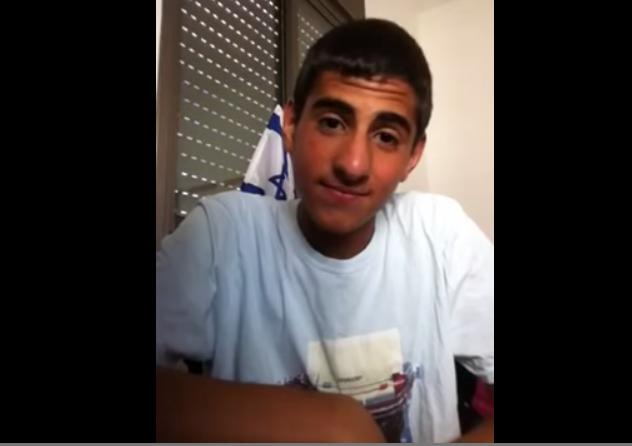 Prof. Jaccobson blogged yesterday about the tribulations of Israeli Member of Knesset Haneen Zoabi, who is privileged and free to serve in the legislature of the country that she reviles.

But there’s another Zoabi, in fact a distant cousin, who also has been in the news. Mohammad Zoabi. He’s a teenager who describes himself as a “A Proud Israeli Arab Muslim Zionist.”

Mohammad first came to my attention when he released the video below, a plea to return Eyal Yifrach, Gil-ad Shaar and Naftali Fraenkel, in English, Hebrew and Arabic.

But such sentiments are not popular among Israeli-Arabs and Mohammad disappeared.

Last week the mystery of Mohammad Zoabi’s disappearance was solved.

The Times of Israel reported that Kay Wilson, a terror survivor, had hid Zoabi in her home for a month during Operation Protective Edge this past summer and he was subsequently sent off to the United States.

At the height of the July-August Gaza war, it became evident that Zoabi had to leave his hometown. He ended up staying with Wilson over the summer while an Orthodox Jewish organization that asked not to be named arranged his passage to the US.

Wilson, who was living in Modiin at the time, said she was touched by the teenager’s courage and initially contacted him after finding out they had a mutual friend. “I helped him because I know from the machete scars on my own back that death threats should always be taken seriously,” she wrote in a Facebook post Saturday. “I helped him because, like me, he is a human being.”

Fearing he would be recognized in public during his month-long stay at Wilson’s home, Zoabi wore a kippa (Jewish skullcap), and was introduced to friends and neighbors as her nephew “Charlie” visiting from the UK. The two were undeterred by the high tensions that surrounded the Gaza conflict and the missile-defense sirens that became routine during the conflict, and managed to take trips around the country and even participated in archaeological digs in the Galilee.

The Times of Israel report was based on Wilson’s Facebook account of her rescue of the teenager. (Wilson recounted the terror attack that claimed her friend’s life and nearly took hers at The Tower Magazine.)

Outside of reports in the Israeli media, there is very little coverage of him and his travails. If she came to the United States, Prof. Jacobson wryly observed, Haneen Zoabi could probably count on “an endowed professorship at Columbia, or presidency of the American Studies Association.” But her cousin Mohammad’s plight is mostly ignored.

A few weeks ago Haneen Zoabi enjoyed a mostly sympathetic portrayal in The Washington Post. According to the Post, “To her supporters, Zoabi, 45, is a Palestinian lioness speaking truth to the Israeli establishment by asserting the rights of the 20 percent of Israel’s population who are Arab Muslims and Christians.” Because that, of course, is what an Israeli Arab is supposed to do. But the politician Zoabi has legal channels to fight her fight. So maybe she’s an underdog, but she’s a pretty well-protected one.

The teen Zoabi, on the other hand, had to run away because he had no effective protections against those who hate Israel like his cousin. The lack of attention to his plight means that the media only favors certain underdogs – the underdogs who espouse their own approved views. The irony is that Haneen’s career would not be possible if Israel wasn’t the beacon of freedom Mohammad praises. Mohammad Zoabi has displayed real courage in fighting his lonely fight in an intolerant society; he’s not a phony like Haneen, who gets her hateful screeds excused as “speaking truth.”  When will his courage get the attention it deserves?

We can coexist. We did coexist. There is always someone who will throw in a monkey wrench to disrupt the community. It happened in South Africa, it’s happening in Europe, and America too.

The main reason we don’t exist in America anymore: a slimebag calling himself ‘Barack Hussein Obama.’

Oops – a little too fast on the ‘exist.’ Should read ‘co-exist.’

On the other hand — with Obama holding the power of the presidency for another 2 years, maybe it will prove not to be a typo after all.