Don’t worry, there’s probably an endowed professorship for you at Columbia. 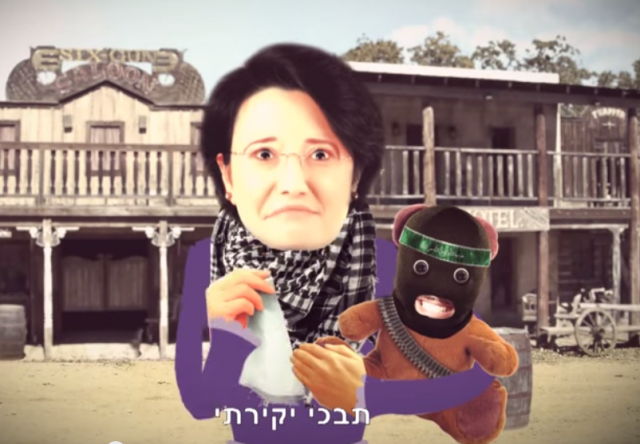 Haneen Zoabi hates Israel. She encourages its enemies. She spews anti-Israel propaganda with reckless abandon. The kidnappers and murderers of three Israeli teens last spring were not terrorists, according to her.

Haneen Zoabi also is a member of the Israeli parliament, the Knesset, as part of Arab nationalist party Balad.

There have been moves to ban Zoabi from the Knesset, and her disruptive behavior within the Knesset has resulted in a temporary ban.

But she’s still there, and running again in the upcoming March 2015 elections.

There is no such thing as a Haneen Zoabi in reverse in most countries, and certainly in Arab countries, where Zoabi would be in jail or worse.

In the U.S., a Zoabi-equivalent probably wouldn’t make it into Congress because of our dual-party system.

No, in the U.S. a Zoabi would have to settle for an endowed professorship at Columbia, or presidency of the American Studies Association.

Danny Danon, a popular “right wing” Israeli politician, knows the public doesn’t like Zoabi, and is running an animated campaign ad mocking her for supporting Israeli’s enemies in order to boost his own election prospects.

Sorry, don’t have version with English subtitles, but you probably can figure it out:

This lunatic is suing over the truth>» » Zoabi Sues Likud MK Danon for Video Showing Her as Pro-Terror http://t.co/Cfs0KWrpCo #Israel

Arab Knesset Member Haneen Zoabi –- the one who sailed with IHH terrorists, said that the kidnap-murderers of three yeshiva boys last June were not terrorists, defends terrorists and calls soldiers ‘Nazis” – is suing Likud Knesset Member Danny Danon for a video showing her in jail with terrorists…

Lyrics to the clip are sung to the tune of “Oh Susanna” as the action shows “Sheriff” Danon locking up Zoabi in jail along with Hamas leader Ismail Haniyeh and Azmi Bishara, a former Knesset Member in Zoabi’s Balad party who fled the country after being indicted for aiding Hezbollah in the Second Lebanon War.

Danon posted the video as part of his campaign against Prime Minister Binyamin Netanyahu in the elections next week for chairman of the Likud party.

After hearing of Zoabi’s lawsuit, Danon said she deserves to be in jail. The public may be behind him, judging by a recent poll showing that 90 percent of the respondents support revoking her citizenship.

The lyrics of the video panning Zoabi include, “There is a limit to every traitor.”

Update: Interesting aside that David pointed out on Twitter. Zoabi’s teenage cousin Mohammed had to flee Israel under threat from anti-Israel Arabs after making a pro-Israel YouTube video.

@joelengel @LegInsurrection and she's still in Israel unlike her cousin who had to flee to the States for being pro-Israel.

“In the U.S., a Zoabi-equivalent probably wouldn’t make it into Congress because of our dual-party system.”

Here’s a translation of the lyrics:

You had a good time in the Knesset
and set sail with terrorists
murderers of Israelis
can count on your support.
But every traitress has her limit,
yes, say goodbye nicely, *
becuase you should have known
to keep your mouth shut sometimes.
Oh, Zoabi, cry, my darling
because now Danny has arrived: the True Right.

The infiltrators are taking off **
because Danny is an iron wall
and the building will eventually resume ***
despite Tzipi’s wailing. ****
Dannon was the first to warn of the tunnels
he identified the danger
not everyone was crazy about it *****
but it’s a big deal.
Oh, Zoabi, cry, my darling
because now Danny has arrived: the True Right.

Not just Danny, it’s a bit out of proportion,
the Likud is strong with Danny, the true Right.

THIS IS NOT THE END…
WE START NOW

Notes
——
* The scroll reads “Zoabi Law”, i.e. the law that suspended her from the Knesset, which Dannon sponsored.

** The road sign points right to Israel and left to Africa.

*** He’s using a hair dryer to thaw out a frozen house; this refers to the unofficial but very real “building freeze” that Netanyahu has imposed on Jewish residents of Judea and Samaria.

***** The Wanted poster reads “Suspected of standing on his principles at any price”.

Actually Rabbi Meir Kahane himself was never booted from the Knesset; when he spoke almost everyone would leave, but he was officially accorded all the rights of an MK. But when the polls showed him getting 10 seats, things got serious; his competition on the right (such as Geulah Cohen) couldn’t have that, so they banned Kach from competing in the next election.

There’s a version of the campaign video with English subtitles on Jerusalem Post. Although, I’m sure that it makes a bit more sense to those whom are the intended audience in its native Hebrew.