“I’m obviously frustrated with the results of the midterm election.” 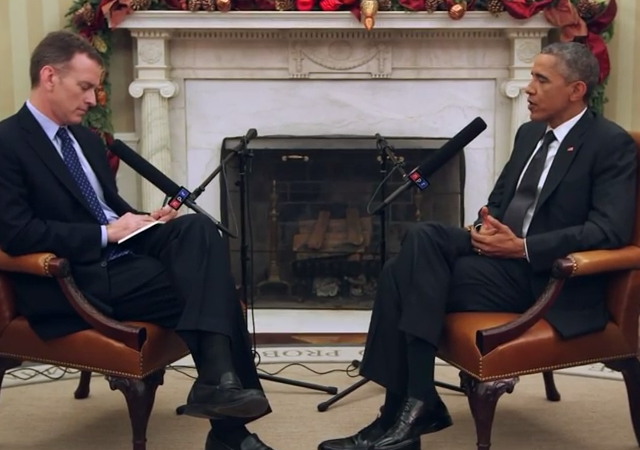 Obama recently sat down for an interview with National Public Radio during which he was asked how he is going to work with the new Republican controlled congress for the remainder of his presidency. His response was rather telling.

Brendan Bordelon of National Review has the story:

In an interview released Monday by National Public Radio, President Obama made clear what’s long been suspected by White House observers — he believes Democratic politicians sowed the seeds of their own defeat in November by failing to support his “great record” as president…

“I’m obviously frustrated with the results of the midterm election,” he said. “I think we had a great record for members of Congress to run on. And I don’t think we — myself, and the Democratic Party — made as good of a case as we should have. And, you know, as a consequence we had really low voter turnout, and the results were bad.”

Of course, some liberal media types are already trying to correct the mistake the American people made in November.

The new congress hasn’t even been sworn in yet but we’re getting articles like this one from Kyle Cheney of Politico:

Republicans just won the Senate majority last month. But can they keep it?

A cursory glance at the 2016 Senate map shows a slew of endangered Republicans up in two years — with few opportunities for offense as in 2014, when the GOP won nine Democratic-held seats to grab control of the chamber.

Do you think we could get the new members seated before speculating about 2016?

I wish they had.

The Democrats would have taken an even worse beating at the polls.

“I think we had a great record for members of Congress to run on.”

NONE of them…or their staffs…agreed.

Seems kinda…delusional… Like you’d find in a man with a deep, dark pathology.

I truly wonder if he’s not addicted to heroine or some other type of hard drug. He exhibits many of the hallmark symptoms of a junkie.

Both Obama and Ragspierre are wrong. There were dozens upon dozens of Congresspeople who ran on Obama’s record as president. Unfortunately for him they all had and (R) behind their name.

An alternate headline might be: “Obama frustrated to find out Democratic politicians aren’t quite as stupid as Democratic voters.”

So many mirrors, so little mind. What’s an Obama to do.

For him, it was a great record of multiple expensive trips, numerous golf outings, all those major scandels going nowhere and the icing on the cake being spineless Establishment Republcans folding at critical moments of opportunity.

“Hope Springs Eternal” said the Lame Duck as he waddled towards the back-forty, trying to escape the hounds of heck!

Actually, I apologize, completely forgot that Obama’s well on his way to radically transform our country. My error, might be early Alzheimer’s or too much stress; forgive my lack of attention to detail.

Here’s hoping that during this next two years, Obama will fail mightily with his radical transformation of our country. Our country can be great once again when we make it so.

What a maroon. He’s still convinced the reason why the American people don’t want anything to do with his crap sandwich is simply because he hasn’t been able to figure out how to wrap it up all pretty. He is unwilling to admit that he is rejected precisely because he and his policies are full of crap ~

Well yeah that, and we’re all RAYCISS!

Delusions of grandeur, anyone?

It’s too bad Obama wasn’t asked if he would help the Republicans with the things they want done.