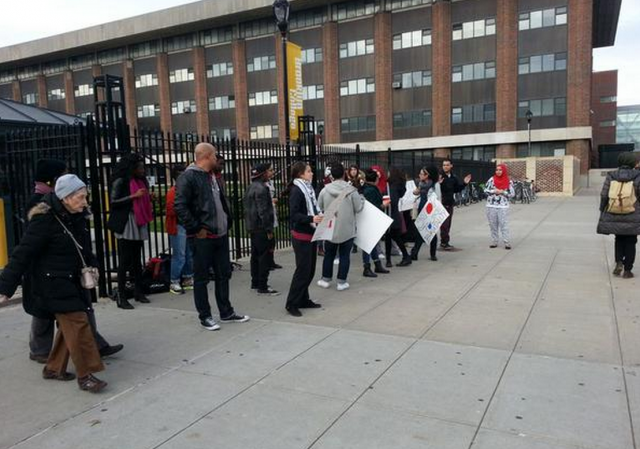 Demonstrations called “Hands Up Walk Out” are taking place all over the country today. According to the event website:

In the wake of events in the last weeks, including the non-indictment in the killing of Mike Brown and the senseless killings of Akai Gurley in New York and 12-year-old Tamir Rice in Cleveland, our communities are hurting and justifiably angered. What gives us hope in this moment of pain and anguish is the thousands of people who have poured into the streets of America to demand change.

From the #ShutItDown actions that have blocked major highways and intersections to the #BlackoutBlackFriday protests,the message is clear: No more business as usual. We can no longer do what we have always done and cooperate with a system that does not respect Black Lives. We will only get the change we want if we disrupt the daily order and insists that Black Lives Matter. If that means shutting down the entire country, that’s what we’ll do.

On Monday, Dec 1st people around the country will be walking out of their schools and places of work in solidarity with Ferguson communities across the country effected by police violence.

Where? It can be any central location at your school or the area where you work . Consider if there is a place that has relevance to social justice such as a monument, chapel, or scene of previous protests.

“Hands Up” refers to early reports that suggested Mike Brown had his hands up in the air as a sign of surrender when he was shot by police officer, Darren Wilson. Later, it was revealed this was not true.

Participants of “Hands Up Walk Out” were encouraged to post photos of their events online.

Not surprisingly, the largest turnouts seemed to have occurred at ivy league campuses and leftist organized marches, but even those were not particularly large.

The rest? They were itty bitty.

I’m sure lots of other people took better pictures than this, but here is a glimpse of #HandsUpWalkout @Yale pic.twitter.com/76kUiy47Se — Heidi Knoblauch (@heidiknoblauch) December 1, 2014

There were about 20 – 25 people in total at the #TAMU #HandsUpWalkout But, it is Texas and no other school in the state had one — Bearded Elvis (@OldCaesarCole) December 1, 2014

#Handsupwalkout everybody else has their crowds. I have My Passion, My Mission, & Myself #Ferguson (THE ONLY1) pic.twitter.com/bINQ0UFLfl — Kyla سيFoxxسب (@KYlA_FoXX) December 1, 2014

I am sick of hearing about ‘justifiably angry’ or ‘understandably angry’ protestors.

They are stupid and uninformed, that’s all. Not justified in any way, and only understandable in terms of their pathology.

A violent criminal was killed in the midst of a violent crime spree. It’s a high-risk profession, especially when you attack armed people.

The ‘lessons from Ferguson’ are simple:

1. Don’t commit crimes
2. Don’t attack police officers
3. If you can get ignorant people sufficiently stirred up, you can loot with impunity.

The responses of the predictable Leftists and their entire shunning of the once-noble profession of journalism have created the situation where we can no longer believe that the media will tell us what ACTUALLY happened. Only what the custom-made, specially-tailored, pre-packaged bit of information (not fact) that they want you to base your next actions on is what they have given us, and WE have had to go and investigate as a social group.

Brown committed felony robbery, then battery of an officer and likely attempted murder and was meted out infinite justice for his transgression.

Tamir Rice spent 20 minutes waiving around a pellet gun, threatening people at a local park, making them fear for their lives, because he was waiving around a gun like a maniac. The cops rolled up, and he did not IMMEDIATELY drop the gun, so they shot him dead. The VERY REALISTIC LOOKING pellet gun had the “orange” safety marker removed. Why? My guess is so that it WOULD LOOK REAL.

Akai Gurley – So far, I actually feel sorry for him. But, getting shot is one of the risks when you live in a ultra-high-crime building (2 murders in the last year, 2 robberies and 4 assaults last MONTH). There is no way in hell that he DIDN’T KNOW the crime going on. That is your CUE TO LEAVE. He seemed like he was starting to get his act together (after having been arrested a DOZEN times).

These protesting MORONS need to learn that this is basic social Darwinism. The Criminals who don’t have enough brains to keep their heads down are the ones who get shot first. STOP DEFENDING THEM!!!!

The Protesters do have ONE thing right, though, although it’s not how they mean it: No more business as usual. We can no longer do what we have always done and cooperate with a system that does not respect Black Lives. That system, is the TOLERANCE of the BLACK INNER-CITY THUG CULTURE. Not only must it end, it must be destroyed in such a manner as to never be allowed to re-form again.

I mean, it was lunchtime, and I was hungry…. got myself a good sandwich, a pasta salad, and a Pepsi. Best “walk out” I’ve never been a part of.

I don’t count protests and demonstrations put on by college students. They are only recent high school students and have no life experience. It would be interesting to talk to some of them in ten years to see what they think then about government, the media and a life raising families.

AND there are pictures of the response…

Jheez, that’s it???? I’ve had dentist appointments that were better attended.

Unsurprisingly, people with jobs have better things to do.