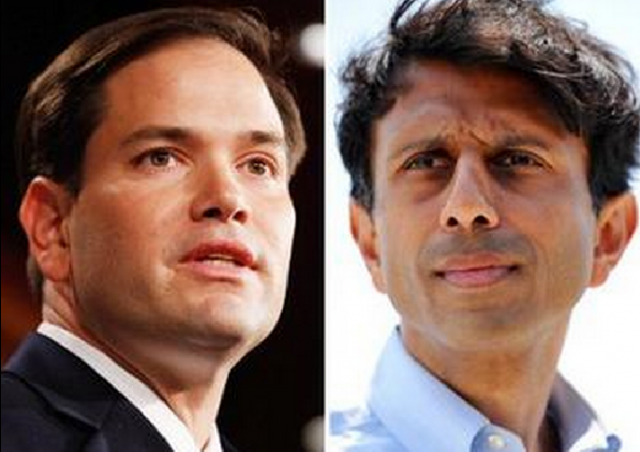 My goodness.  Not much diversity there.  Actually, none. Mostly old white people, not that there’s anything wrong with that, but considering the years of demagoguery from Democrats, it certainly is ironic.

Republicans, by contrast have a diverse field, including four likely contenders who are “diverse” but eschew presenting themselves as hyphenated Americans or playing racial politics.

Politico reports, Race and the race:

Bobby Jindal is Indian-American, but you’ll never hear him describe himself that way. Marco Rubio insists he’s an “American of Hispanic descent.” And Ted Cruz “certainly” identifies as Hispanic, but he didn’t run for office as “the Hispanic guy.”
These Republican lawmakers, along with African-American conservative favorite Ben Carson, look poised to make the 2016 GOP presidential field the party’s most diverse ever. They are all mulling over White House runs as the GOP continues to struggle with minority voters and as racial tensions over police conduct have captivated the nation.

But none is planning to play up his race or ethnicity in a presidential campaign, or even to stress the potentially historic nature of his candidacy. Instead, according to interviews with donors, strategists, aides and several of the possible candidates themselves, each is more likely to hit broader themes such as the American dream and the importance of hard work, which, for Jindal, Cruz and Rubio, would include nods to their parents’ immigrant experience.

How will Democrats handled this problem of Republicans being far more diverse than Democrats?

Look no further than the very same Politico article:

“It’s not enough to be of Hispanic descent, you have to actually understand where someone’s coming from — be able to identify with them,” said Maria Teresa Kumar, the head of the Hispanic young voter advocacy group Voto Latino. “And all we unfortunately hear from Ted Cruz is, ‘we have to close the border,’ ‘the crime of being undocumented.’ It’s hard for Latino voters to swallow.”

Not “real” (fill in the blank), because they don’t think like Democrats. Ethnicity and race will now become matters of policy not ethnicity and race, unlike in the past when Democrats were more diverse.

Oh, and expect the War on Women or some variation of sisterhood to fill in the void.

For Democrats, 2016 will be the Year of the Woman because of Hillary.

The Democratic demand for hyphenated Americans will be a thing of the past, so 2008 and 2012.

Wow! The Dems are worse off than I thought. Or we will be if any of them are elected!

Kirsten Gillibrand? Please, spare me! And I guess I must be out of touch, but who the heck is Amy Klobuchar? Brian Schweitzer?

And as a Marylander, I can without reservation say that anyone who votes for Martin O’Malley has a large hole in their head which needs to be filled with anti-psychotic medication. There’s a reason that the Republicans won the governorship this time and that reason is the legacy of O’Malley. Anthony Brown was just going to be more of the same.

There was a piece out just after the election outlining how the combination of Obama and Hilary Clinton had sucked all the oxygen out of the Democratic Party all the way down to the state level.

But, in those words from Star Wars .. Don’t Get Cocky Kid.

They will be back in a couple of more cycles.

Bernie Sanders is an independent (AKA Socialist), not a Democrat.
Yeah. They did support one in Kansas but it didn’t work.

On the Republican side, I see Jeb Bush as DOA. The ‘family’ of negatives is just too much. Mitt Romney would do better.

That wouldn’t stop Warren from choosing him to run with her.

Whoever debates her should start off by admiring her high cheekbones asking where she got them from.

My guess is that, if she decides to run and the Dems decide to nominate her, somewhere in some back room of someforgotten Oklahoma county office a paper will suddenly appear that confirms her Indian heritage.

Ask her how her family got so many Cherokees started on the “Trail of Tears”.

The Republican should seek as many endorsements as possible from Native American groups, most especially the Cherokees.

Americans in America. How novel. Good.

“What is true of creed is no less true of nationality. There is no room in this country for hyphenated Americanism. When I refer to hyphenated Americans, I do not refer to naturalized Americans. Some of the very best Americans I have ever known were naturalized Americans, Americans born abroad. But a hyphenated American is not an American at all. This is just as true of the man who puts “native” before the hyphen as of the man who puts German or Irish or English or French before the hyphen. Americanism is a matter of the spirit and of the soul. Our allegiance must be purely to the United States. We must unsparingly condemn any man who holds any other allegiance. But if he is heartily and singly loyal to this Republic, then no matter where he was born, he is just as good an American as any one else.”

How many of the Dems on that list hold a pure allegiance to this republic?

The problem for the GOP is that it can’t back into this election. They have to advance ideas. That isn’t likely to be the case, given its track record of late. The atmosphere is ripe for a third party (TEA or Libertarian) to peel away disgruntled voters, and the GOP works overtime maintaining its “Party of Stupid” rating. 2016 is likely to be ugly.