“A festival of hypocrisy.” 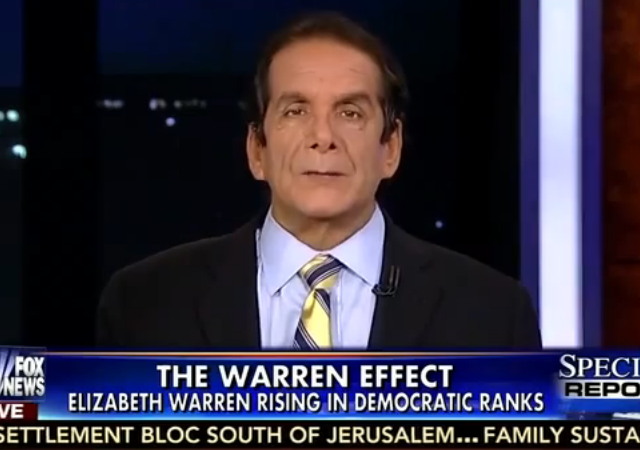 Last night on Special Report with Bret Baier, Charles Krauthammer offered commentary on Elizabeth Warren’s very theatrical protest of the so-called Cromnibus. Things are a little different now that a Democrat is objecting to a government funding bill.

What should one think of Elizabeth Warren’s brinksmanship over the cromnibus bill last night? “Spectacular hypocrisy, a festival of hypocrisy,” says Charles Krauthammer.

“And, of course, the media loves it when it’s a liberal Democrat who leads the fight, she’s a ‘principled’ politician,” Krauthammer said on Friday’s Special Report. “Whereas when it’s Ted Cruz, he’s a terrorist, essentially.”

Although Krauthammer is not convinced that Warren will run in 2016, “her star is rising,” he said, “and the hero worship of the media is beginning. This sort of sounds and feels a bit like the early Obama years, between 2004 and 2008.

Here’s the video, via the Washington Free Beacon:

Krauthammer noted that if Warren is running for president, this was the moment she launched her campaign.

The Week Elizabeth Warren Decided to Run for President

Or may have decided. We won’t know for a few months whether the Massachusetts senator will challenge Hillary Clinton for the Democratic nomination, but if she chooses to run, we’re going to look back at this week as a pivotal moment in Warren’s decision-making.

Warren has been waging two battles against mainstream Democrats over the past month in an attempt to reduce Wall Street’s influence within the party. Both of those battles hit inflection points this week. The first is over President Barack Obama’s nominee for the under secretary for Domestic Finance, the number three position at the Treasury Department. It’s rare for such a nomine to become a political issue, much less a political issue within a party. But that’s what has happened to Antonio Weiss, whom Obama nominated on November 12.

A week later, Warren came out vocally against Weiss, arguing that he was both unqualified for the job and another example of Democrats’ filling senior government positions with people from Wall Street.

How convenient for Elizabeth Warren to suddenly notice that members of her party have ties to Wall Street.

Funny, I don’t recall her making such connections before the elections of 2008 or 2012.

Ironic that they are circling the wagons around her like they did for Obama — metaphorically speaking that is.

Least we can do is the Lakota war cry in response.

Do any of her Occupy legion know how much wampum she has?

Oh, but it was all earned in the service of those who were less fortunate, in fighting for ‘the little guy’ and in advocating for students and people who experienced medical bankruptcy.

The above should have a /Sarcasm tag (for those who don’t get it).

Funny that she’s criticizing a nominee for being unqualified for the job. That didn’t stop Warren from pursuing a Senate seat and next, we assume, the presidency. She has no qualifications whatsoever for either position.

She’s probably actually qualified for the position that she’s in, having been an attorney in private practice, a law professor an author of one of, if not the, textbooks on bankruptcy law and an adviser to several large corporations. She has, at least tangentially, the experience necessary to formulate and direct organizational structure (unlike President Obama).

Now, that doesn’t mean that she is suited for the position. Her myriad lies about her Native American heritage, her misrepresentations about her scholarship and research, and her general opinion on the ability of the average person to act in his or her own economic self interest without the Government looking over their shoulder should have been sufficient “red flags” to knock her out of contention.

If the Collective didn’t have HIGH-pocracy, they wouldn’t have no pocracy at all…

Remember Shaidle’s First Law: “It’s different when we do it.”

Who the hell cares what her motives are, or that of the other democrats who came out against the CRomnibus bill — they’re on the right side of the issue. Both main-stream Republican and Democratic a-holes passed the bill, to the detriment of all Americans. Rather then complain about the Republicans who voted for it, partisan Conservatives like Kraut-Komplainer and others in typical lock-step knee-jerk partisanship, want to take shots at a Democrat who voted against it, the nit-pickers more interested in political gamesmanship then the actual issues at stake.

Politics is about forming coalitions on issues, across party lines. Your don’t hear Krauthammer nit-picking the Koch brothers when they support fiscally conservative Republicans and ask what their true motives are: both brothers are socially liberal; they believe in gay marriage, legalizing drugs, and once reportedly gave $10 million to the ACLU to fight the PATRIOT act.

Most Americans hold a wide spectrum of beliefs or preferences, on both sides of the liberal-conservative divide. Politics is the art of creating consensus, not sharpening that divide, like the far left and far right do daily, producing the constipated grid-lock government we have now. A pox on both their houses.

John Hineraekr at Powerling blog has an excellent write up on Warren and the Dems wal-to-wall bull***t on Dizzy Lizzy.