The “Sick Man” of Europe is…Europe 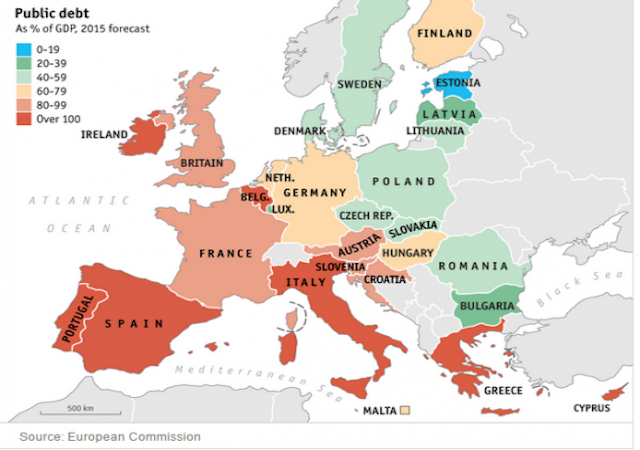 The label “Sick Man of Europe” has been awarded to many a European nation and empire since it was first used to describe the decrepit Ottoman Empire in the mid-19th century.

Today, it seems the entirety of Europe, save the United Kingdom and Switzerland, is worthy of the “sick man” title. The Eurozone is teetering on the brink of yet another economic crisis thanks to continued low growth, high debt, and the rise of populist political parties in the weaker Euro economies. The euro currency dropped 11% against the dollar this year, falling to its lowest levels in two years. Russia, as I have already covered, is reeling in the face of 2014’s plummet in oil prices and faces a crisis in its own currency; in fact, Russia’s GDP contracted 0.5% in November, marking the first Russian decline since 2009, and is expected to decline 0.8% in 2015. Even Scandinavian economies, like those in Denmark, Norway, and Sweden, are positioned for trouble in 2015.

With its economy tanking, there is little consensus on what Russia will look like politically in 2015. Basically, Putin has three choices: 1) Weather the storm hoping for a speedy recovery in oil prices, 2) Militaristic voyeurism (to boost domestic popularity, power, and perhaps induce a crisis that would prop up oil prices), or 3) Commit to real economic reforms along the lines of divesting state assets, weeding out corruption, and promoting a diversified economy.

But right now most analysts and pundits are nervously looking at the political situation in Greece. On Monday, the Greek Parliament failed to elect a president, forcing a snap election, which will be held on Jan. 25. The current center-right coalition, led by Prime Minister Antonis Samaras’s New Democracy Party, is expected to lose to the far-left populist party Syriza. Syriza’s economic platform seeks to reverse austerity measures put in place after the first round of bailouts in 2010 and to repudiate much of Greece’s debt, which currently sits at over 174% of GDP.

The Economist had this to say about the party’s leader, Alexis Tspiras:

Although Mr Tsipras says he wants to keep Greece in the euro, he also wants to dump most of the conditions attached to its bail-outs, ending austerity, reversing cuts in the minimum wage and in public spending, scrapping asset sales and seeking to repudiate much debt. Such a programme seems, to put it mildly, to sit uncomfortably with Greece’s continuing membership of the singe currency.

Despite the fact that Greece’s economy has grown, its GDP is still 20% smaller than it was in 2010 and the unemployment rate is at a staggering 26%. Syriza’s economic platform, however, will do little to improve the Greek economy. A return to the ways of the Greece of old would only scare away foreign investment and discourage domestic business creation.

The only positive element Syriza brings to the table is a desire to restructure debt terms, as the country’s two immense bailout debts, worth $292 billion, are a huge burden on its struggling economy. Greece’s debts are likely never to be paid back in full, so it makes sense to ease the pain to some degree. However, if Greece’s troika of lenders—the European Commission, the European Central Bank and the International Monetary Fund—do write down some of Greece’s bailout debts or offer generous restructuring terms, other highly indebted Eurozone countries like Italy and Spain will certainly expect similar treatment. Thus, letting Greece off the hook could translate into letting most of Europe off the hook, or force Europe’s financial power-brokers into a very tough game of picking winners and losers. This element of moral hazard is what U.S. banking and regulatory authorities tried but failed to prevent in the U.S. Financial Crisis of 2007-08. 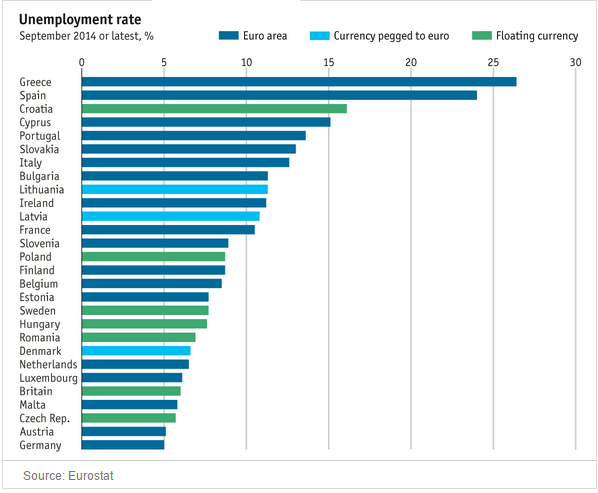 More than 1/4 who want to work in Greece can’t find a job. (Source: The Economist)

Though there are doomsayers regarding Greece and Euro, some like the New York Time’s Neil Irwin argue that there will be little or no contagion this time. Irwin points out that despite the 5% dip in the Athens Stock Exchange and the rise in Greek bond rates after the notice of a snap election, there wasn’t a massive sell-off in other European markets, especially the shaky ones like Spain and Italy. Undoubtedly, market confidence this time around is in part built upon the European Central Bank’s (ECB) promise to do “whatever it takes” to end the Eurozone crisis, which essentially means the ECB will buy Greek bonds if deemed necessary (what I call QE-E, Quantitative Easing in Europe).

Europe is clearly sick, but what is the illness?

The disease ravaging Europe right now is called statism, though many, especially those in Europe, don’t want to admit it. In the Eurozone, welfare states and economic central planning have eliminated competitiveness and ingenuity. Earlier this year, Britain’s Chancellor of the Exchequer George Osborne cited the fact that Europe accounts for 50% of the world’s welfare spending but only 7% of the world’s population. Of the 18 OECD countries that have social spending as a percent of GDP above the group average of 22%, 17 are European. France, Finland, Belgium, and Denmark all spend over 30% of their GDPs on social spending.

Even the relatively well-off UK has out-of-control social program spending, which includes healthcare, old-age benefits, public pensions, etc. Such spending is equivalent to 28% of GDP, or over $10,000 per person. In the US, federal government spending on healthcare and welfare is a just shy of $5,500 per person.

The Eurozone has only managed to sputter along for so many years because it has been subsidized by American money-printing and business innovation. Try namning one major European innovation or company that is making a global impact anywhere near the scale of, say, all-American companies like Facebook and Tesla or all-American inventions like 3D printing, GPS, and the smartphone.

In short, there is no way Europe can continue in its current economic-political paradigm and achieve substantial economic growth—they are mutually exclusive options.

I’ve actually been concerned with Italy.
we have what appears to be a modern day Pius XI in the Vatican and similar economic situations when Mussolini rose.
just a niggling feeling, may all be false.

“Putin has three choices: 1) Weather the storm hoping for a speedy recovery in oil prices, 2) Militaristic voyeurism (to boost domestic popularity, power, and perhaps induce a crisis that would prop up oil prices), or…”

We have subsidized Europe via NATO, but still their challenge to the US Dollar seems to have mostly failed, as they are now “printing” and doing their version of QE, as I’m told at least.

Who ever thought we could have zero interest rates and have the federal reserve pretend to buy $1 Trillion a year in bonds no one else would buy? And who could imagine it could go on so long without breaking something?

It would seem Japan is weakest, but as long as people are content with holding paper instead of real assets, it continues. Yellin and the ECB are swearing to print their way out of any crisis, which can only end badly, or so experts keep telling me.

Geithner as Treasury Secretary mentioned a global currency once, and I think the billionaires have their eye on some UN controlled globalist currency, and global tax, to go with another eye on US for the global warming crap.

Mr Geithner told the Council for Foreign Relations that he had not studied the proposal by Zhou Xiaochuan, Chinese central bank governor, for greater use of special drawing rights – a synthetic currency maintained by the International Monetary Fund that represents a basket of actual currencies – in global reserves, but added: “We are quite open to that.”

He said increased use of SDRs should be thought of as an “evolutionary” step rather than a step towards “global monetary union”.

That was 2009, and they walked it back. But with Obama and the Democrats, surrendering (more) sovereignty is not out of the question. The Western world is too successful, and tyrants will unite to destroy us, Dem’s will take their bribes.

Europe also has a rampant immigration problem, that the elites seem to promote, against the will of the people. I guess all the car burnings in Sweden and Paris are considered good for the economy or something.

There is a fourth way for Putin, namely to lower the price of spirits.
As far as military boyar ism or whatever, Russia’s idea of adventurism is to bleed the opponent of resources. Like what are they doing exactly in Donetsk airport? And Ukraine is falling for it!

The problem is mostly interventionism. If they simply stopped giving Greece money out of the public treasury, Greece would have corrected itself a long time ago. If Greece needs to be dirt poor to change its ways and some banks and debt investors have to take a burn to make that happen, I am okay with that. Moral peril is a real thing and its necessary for a functioning society.