Focus on Garner case should be on politicians, not police. 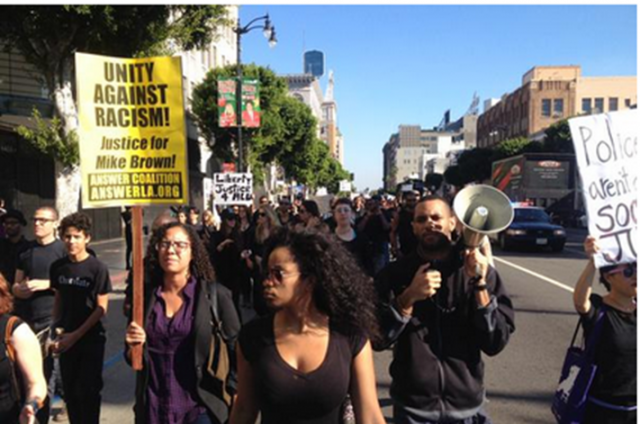 Professor Jacobson may be taking a much needed sanity break from the Saturday Night Card game, but the social justice warriors continue to draw from the bottom of the deck.

The most shocking aspect of one of the race-based demonstrations that occurred Saturday: It was in the heart of one of the most elite, “culturally sensitive” centers of the country — Hollywood.

Hundreds of people taking part in a nationwide protest against police brutality staged a die-in Saturday in the same busy Hollywood intersection where a man allegedly armed with a knife was shot and killed by Los Angeles police officers the previous night.

As they marched through the streets of Hollywood during the afternoon hours, demonstrators chanted “Hands up, don’t shoot” and “I can’t breathe,” refrains heard around the nation in protest following the fatal shooting of Michael Brown in Ferguson, Missouri and the choke hold death of Eric Garner in New York. Both men died at the hands of police.

Protesters also staged a “die-in” at the intersection of Hollywood Boulevard and North Highland Avenue, where less than 24 hours earlier, police fatally shot a man after law enforcement officials said he did not comply with officer orders.

The demonstrators blocked traffic in the area and essentially shut the busy intersection down for a time.

A photo spread via Twitter will give you a sense of the scene. 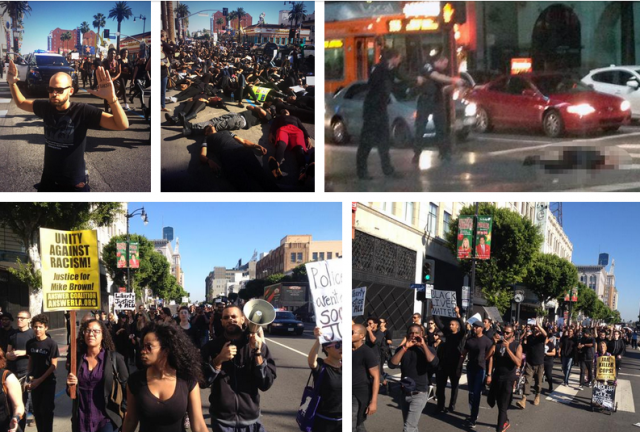 Some of the other Tweets of note:

Thanks to @LyricJones and all the other organizers of #BlackOutHollywood. #Tremendous pic.twitter.com/tQ6m4AFduh — Khary Payton (@kharypayton) December 7, 2014

Before we marched, we prayed. Before we chanted, we sang. @tyrese #BlackOutHollywood pic.twitter.com/SWGqNTwwHC

As a citizen activist who has organized a few demonstrations with SoCal Tax Revolt Coalition, I would like to note that this demonstration looks as if a significant amount of pre-planning went into it. I noticed the professionally done signs, for example. And much effort went in to ensuring the attendees were all in black. If we Tea Party types had done as much, we would have been smeared as “astroturfed”.

(Nevermind, we were deemed astroturf anyway).

And while I am gratified that the organizers stressed the peaceful aspect of the march, I have to wonder if we have two more years of these events in store, as the administration and black leadership try to keep Americans focused on anything other than the weak economy and their roles in perpetuating it.

The signs memorializing Eric Garner in the mix also caught my eye. Here is common ground that we Tea Party types may find with the #BlackoutHollywood protesters, if they focus on the prime reason Garner drew police attention in the first place.

In National Review, Jonah Goldberg makes the case that New York’s cigarette taxes are partly to blame for Garner’s death.

But you know what reasonable people can’t dispute? New York’s cigarette taxes are partly to blame for Eric Garner’s death.

Senator Rand Paul of Kentucky made this point Wednesday night on MSNBC’s Hardball with Chris Matthews, and liberals have been freaking out about it ever since.

“I think it’s hard not to watch that video of him saying, ‘I can’t breathe, I can’t breathe,’ and not be horrified by it,” Paul said. “But I think there’s something bigger than the individual circumstances. . . . I think it’s also important to know that some politician put a tax of $5.85 on a pack of cigarettes, so that’s driven cigarettes underground by making them so expensive. But then some politician also had to direct the police to say, ‘Hey we want you arresting people for selling a loose cigarette.’ . . . For someone to die over breaking that law, there really is no excuse for it. But I do blame the politicians. We put our police in a difficult situation with bad laws.”

…New York City declared war on tobacco a long time ago, and in the process City Hall has become addicted to Brobdingnagian cigarette taxes. That’s why law enforcement is enforcing the laws against bootleg smokes.

Here’s to hoping that today’s protests remain peaceful, and that we may one day retire the Saturday Night Race Card game permanently.  Regular Americans have much more in common with each other than the elites would have us believe.

As for the guy in LA who was shot approaching cops with a knife, well… he made his decision as well. IF someone came at me with a knife, the result would be the same.

These are two very distinct cases. Garner, had been cited by the same police officers (part of a task force) numerous times for selling loose cigarettes. His actions were illegal only because New York politicians chose to make the actions illegal to preserve tax revenue. For some reason loose cigarette sales seemed to have a higher enforcement priority than marijuana use in New York City.

After many encounters with these officers, Garner finally had all he could take. I imagine these officers also had all they could take from Garner(probably after having warned him not to come back many times). The situation was toxic even before the encounter began. Garner resisted. The rest will immortalized as a what not to do police training video.

So if you want to cite Garner’s behavior let’s also cite the behavior of New York Governor Cuomo, New York City Mayor deBlasio and the failure of the police officers to de-escalate.

If Garner hadn’t kicked the bucket, this would have been his 32nd arrest. Nine other arrests were also for selling untaxed cigarettes. That leaves 22 other arrests. Garner was 43. That’s a pretty good tally. Garner was quite the busy bee.

You said, “The rest will immortalized as a what not to do police training video.”

There was nothing wrong with the way Garner was taken down, and the video shows classic police procedure. You simply do not know what you’re talking about. Garner died because of his health status. He was a sick man, much of it due to bad habits, and should have had the sense to realize he was no match for anybody, let alone encountering arrest, which he should have known was a strong possibility since he’d already been arrested for that offense nine times!

As for “de-escalating”, that would have entailed simply letting him go. Garner was immediately combative and resisting. Why have cops at all if they are just going to let suspects fight and resist? If de-escalation was the answer, then there’d be no point in even having law enforcement because suspects could just fight, resist and voila! They’re home free. Suppose you or your business is a victim of a crime, be it petty or serious. Say it was the ninth time the perpetrator had done this to you. Would standing there watching the cops let the perpetrator go free just because he resisted arrest satisfy you? Would you be pleased to see this is what you’re paying taxes for? How much higher would your (business) insurance be if it was police protocol to “de-escalate”? The only way to de-escalate a combatant is to walk away and let them go free.

One other thing. About Cuomo an deBlasio. They’re just doing what ‘rats do. It is their nature to tax to the hilt. If you’re going to blame anybody else, blame the dumb jackasses of NY who voted them and the legislature into office. But none of them, not even deBlasio, is responsible for the personal conduct of one man. Garner, and only Garner, had direct control over his decisions and judgment.

We are born with God’s given free will. Garner used his just as we all do.

To me, the interesting thing about these protesters is that every last one of them knows better.

@LAPDHQ @LAPDHollywood Why did you shoot him several times in the HEAD when he allegedly just had a knife Why not his HAND? Answer that one.

Ironic considering that much of the audience, most of who agree with the protestors, are in the business of creating entertainment where “good cops” spread around literally thousands of rounds to take down “bad guys”.

March of the Los Angeles chapter of the Obama fascist Brownshirts.

This sh-t is really happening.

As the Nazis gained power through democratic means, the SA gained a reputation as a well-organised gang of violent thugs. This frightened and put many off Nazism, but others were attracted by the organisation and discipline of a uniformed group.
http://www.theholocaustexplained.org/ks3/the-nazi-rise-to-power/how-did-nazis-gain-power/the-role-of-the-sa/

Let’s march out Squeaker Boehner, Senator McTurtle and Pee Wee Prebus to meet the President’s thugs on the street, mano a mano. Maybe then we’ll be rid of three RINO hacks.

JackRussellTerrierist in reply to TheFineReport.com. | December 8, 2014 at 4:49 pm

Now that’s a sight I’d love to see. Only problem is, it’s impossible. The act of marching requires a spine.

The whole cigarette tax aspect of this case is a canard. Is it a ridiculously high tax? Absolutely. But Garner had an extensive arrest history long before the heavy cigarette tax was imposed and he started selling loosies. Garner had 22 arrests for other crimes.

Whether it was untaxed smokes, shoplifting, burglary, whatever, Garner sealed his destiny by allowing his health to deteriorate to the level it had while continuing to place himself in “street” situations where a confrontation with anybody, anytime, would bring his death.

It is not about tax but resistance and nurtured black racism against whites.

Rand Paul ass-kissing again. He’s too chicken$#I+ to say what the problem really is, so he’s blaming the tax and whining about “I can’t breathe.”

Better prospects for a good candidate for ’16 are already on the horizon, so I wasn’t in his camp anyway. But lately he’s reminding me more and more of McCain.

I’m praying it doesn’t come down to him, tubbo from NJ, and Polyanna Romney.