“An unpopular president in the eyes of the men and women in uniform.” 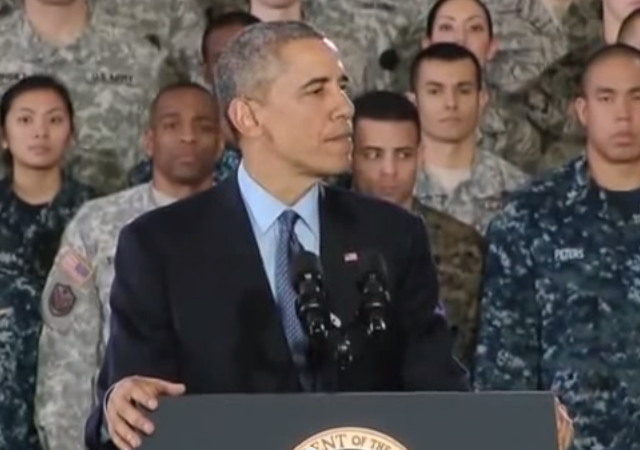 President Obama has never enjoyed a very high approval rating from members of America’s armed forces, but the end of 2014 finds him at a remarkable new low.

Active duty members of the United States military are not happy with their commander-in-chief.

According to a Military Times survey, President Obama’s popularity rating has cratered to just 15 percent in 2014.

That is a new low for the President, falling from an already low approval rating of 35 percent in 2009. The poll of nearly 2,300 active duty members also shows that Obama’s disapproval ratings have increased to 55 percent.

The particularly low rating comes as Obama has launched air strikes in response to Islamic State terrorists taking territory and resources in both Iraq and Syria, vowing to keep combat ground troops out of the conflict. He has also deployed members of the military to combat the Ebola threat in Africa.

Obama’s mark on the military

Obama is an unpopular president in the eyes of the men and women in uniform. Yet his two-term administration is etching a deep imprint on the culture inside the armed forces. As commander in chief, he will leave behind a legacy that will shape the Pentagon’s personnel policies and the social customs of rank-and-file troops for decades to come.

Speaking of the Pentagon, can you guess who’s sending more troops back to Iraq?

It’s not Obama, it’s the Pentagon. An excellent catch by Ace of Spades.

Pentagon to Deploy Up to 1,300 Troops to Iraq in New Year

The Pentagon has announced that up to 1,300 U.S. troops would be sent to Iraq in the New Year, despite promises by President Barack Obama that there would be “no boots on the ground” in Iraq or Syria.

Announcement of the new deployments to Baghdad was made to service members and the media just days before Christmas.

These troops, most of them from combat divisions, will deploy to Baghdad in “late January,” according to a Pentagon spokesman.

I wonder how Pres. ScamWOW would poll with first responders now.

Screaming protestors interrupted a silent memorial for one of the slain officers today.

What are they thinking?

And it must be more than just the Samoans. There aren’t that many of them in the military.

Which doesn’t apply here since that is meant for open protests of and threats towards those officials. Answering a poll is not the same, otherwise any soldier who voted against a sitting president could be considered to have violated this Article. It was never meant to remove the free speech rights of soldiers.

Also, the definition of contemptuous is;

Which is not disagreeing politically with a sitting official, even though that is what the Article has been used for recently.

I kind of remember John Kerry addressing Congress and attacking many of those same political officials named above.

I guess it depends who is getting criticized as he was considered a hero by those on the left–while clearly going way over the line, if you follow Dr P’s claims of illegality.

Enlisted personnel are not constrained by the same rules. My comrades still on active duty refer to Obama as ‘the CinC”, which is totally proper. Of course, they could get in beaucoup trouble if the system officially discovered that that abbreviation stands for Cretin in Charge!

I believe that 15% approval rate is based on the fear of retribution/reprisal more than any actual approval of his job performance.