…so they hid the truth on purpose. 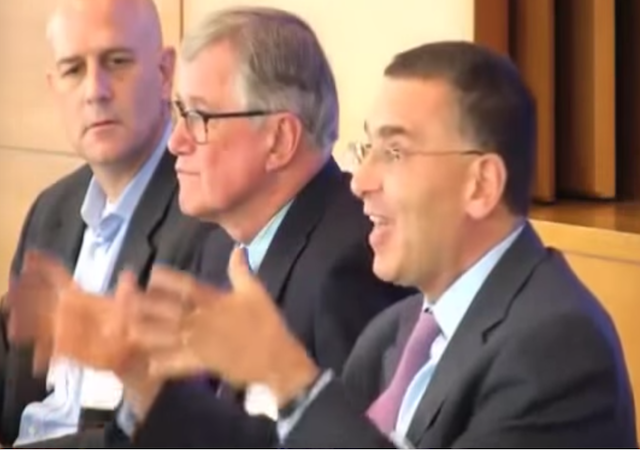 One of Obamacare’s architects was recently caught in a nasty moment of honesty that has the potential to further damage Democrats who signed on to the Affordable Care Act.

Jonathan Gruber, who served as a technical advisor to President Obama during the ACA’s planning phases, revealed during a panel discussion that Obamacare was not designed as a tax, and that the lack of transparency about the new law was the only thing that saved the controversial legislation from an untimely death in Congress.

American Commitment has the video:

“This bill was written in a tortured way to make sure CBO did not score the mandate as taxes. If CBO scored the mandate as taxes, the bill dies. Okay, so it’s written to do that. In terms of risk rated subsidies, if you had a law which said that healthy people are going to pay in – you made explicit healthy people pay in and sick people get money, it would not have passed… Lack of transparency is a huge political advantage. And basically, call it the stupidity of the American voter or whatever, but basically that was really really critical for the thing to pass… Look, I wish Mark was right that we could make it all transparent, but I’d rather have this law than not.”

h/t to the Daily Caller

Yeah, shove it down our throats by whatever means possible. The end justifies the means. What an arrogant bastard.

This road leads to a collapse of the Republic. Remember the USSR? It will happen here too if people like this are not reined in.

Yes, and aimed right at the stupid voters who support Teh Won.

…and notice that he used the term “stupid”, not “ignorant”.

“Ignorant” voters can be counted-on to vote in their own self-interest or in the interest of the greater good once they become “Informed” voters with all the facts.

“Stupid” voters can always be counted on to vote how they are told to vote, regardless of self-interest or greater good….or in other words, democRats.

Isn’t this called fraud? Shouldn’t he/they be prosecuted? At minimum they should be called before a committee to explain their comments to their stupid voters.

No less than the Supreme Court affirmed it so what do you do?

You reveal it. You lay bare to the public the assholes who did this, and the absolute tyranny at play here, and you KEEP DOING THAT so that it sinks in.

THEN you kill this affront to any free people DEAD, and you go after those who spawned it. They should never dare to try to serve in any capacity where they wield power. EVER.

And THAT’s if they survive the tar and feathers.

“Look, I wish Mark was right that we [as America’s elite who know what’s best for everyone] could make it all transparent [and not have to use deception], but I [as a member of said aforementioned elitist class] [would] rather have this law than not.”

~ Thou shalt not steal.

~ Thou shalt not bear false witness against thy neighbour.

Could that be why they want to pull down all those Ten Commandment displays?

Kagan was probably part of the drafting/design. Was Roberts [I know a tax when I see one] also?

We knew the truth and shared it and damn near succeeded in stopping this thing.

When you cannot win a fair battle of ideas, you have to cheat.

Trooper Smith, with all due respect, her name is ANUS Porker.

Gruber is just wrong. His “Stupid Americans” knew instinctively that Obamacare would be a massive failure. That’s why they have always been and still are against it. It was only “Stupid Congresswomen” like Nancy Pelosi who couldn’t figure out what was in the bill.

It shouldn’t surprise anyone if Nancy Pelosi still hasn’t read the bill. She’s a complete moron.

“Lack of transparency is a huge political advantage.”

Yes. The Stasi found it to be so.

I’m afraid my natural tendency would be to beat that guy to death if I met him on the street. Like my reaction to a copperhead in the leaves. No helping it.

For the first time in my life, I find myself having similar thoughts.

Look, we knew Iraq didn’t have WMDs, but we’d rather get rid of Saddam than keep him. If it took lying to get it done, then so be it.

Think the left would have bought that excuse? Me either.

You really need to stop the lying. At the time, the world’s governments thought Iraq had WMD. Several who did not want the US coalition to invade were later found to have been in bed with the sanctions fraud.

I think you misunderstood him. Read the last line of his post again. He’s using that as a similar example that the left wouldn’t have accepted if it’d been offered.

I think you’re being sarcastic – am I right? Evidently from the down ticks some people didn’t get it!

Have you not been keeping up, except maybe with The Kardashians?

The news has been full of reports – including the Gray Lady and the WaPo – concerning exposure by American troops to artillery shells and rockets filled with mustard gas, nerve agents and even what appear to be inert, out-of-date biological weapons. Some of these young men are having severe health problems. It was a deal then and appears to be one still.

The Pentagon asserts that they kept it quiet to keep the insurgents and Baathist loyalists from going out and finding the ones we haven’t disposed of yet.

His statement testifies to the charge that lying Democrats may indeed be “public enemy number one”. The tax deception wasn’t the only lie:

Cost curve bent down, no cost to Medicare

Many of the newly insured are those pushed onto Medicaid, and another 15 million (of the alleged 45M) uninsured would “self deport” if the left was not so intent on importing a new demographic, and providing a magnet for the third world to come illegally, for free stuff.

How many will die from the Democrat plan to kill private insurance through this version of “the public option”? The working stiff again carries the load, the less responsible get the “bailout”. Obamacare taxes the privately insured, in an attempt to destroy private insurance, and build the Obama legacy.

Socialist medicine kills those that were responsibly taking care of themselves, by pushing the tax burden solely on them, in an effort to kick them into the Obamacare plans. The big lie is not just that “it’s a tax”, but that the tax is solely on the private plans. The intent was to kill them, while swearing they would be untouched.

It is the revised and disguised “public option” guillotine for the private plan, by hook and by crook. We just need Obama saying “I am not a crook”.

Nixon was not in obama’s liar league.

The Fed is also obscurant. With its fiat dollar and its Ouija board fiscal policies they are playing a shell game with the Americna people.

Americans are not ‘allowed’ to know what is going on. Instead we as a nation are to be ‘reassured” by someone named Yellen that things are ‘on track.’ Bernanke before Yellen insisted on inflation as a prop.

Keynesians and Krugmans are a dime a dozen and are not worth the newsprint on which they rhapsodize about big government, moral hazard spending and the glories of deficits, bailouts and everything opposite of American common sense.

Caveat emptor when you vote.

Tar and feathers for the openly obscurant.

Great point … yet at the time Obama knew the people were smart enough to “handle the truth”, since he stated Bush was “irresponsible and unAmerican” for running up the children’s credit card.

Of course that was just another campaign lie.

Yeah, the voters were so “stupid” they never approved of Obamacare.

I’m sick and tired of libs who label me “stupid” because I do not agree with them. It is precisely because I am NOT stupid that I disagree strongly.

Libs, you want to see “stupid”, go look in a mirror.

“This is a blockbuster.” – Johnnie Cochran

I think Reince Preibus (sp?) should raise some cash to run this NOW, all over the country. Especially in democratic states.

The rest of us already knew.

The Democrat Party is, effectively, a criminal enterprise that drapes itself in a false veneer of compassion. The entire philosophy is centered around using government force to confiscate money from people who earn it and give it to people who have not earned it in exchange for votes. By their nature, criminal enterprises lie and deceive.

This is the video of this same guy lying about the “typo”, which he before repeatedly verified was designed as incentive to coerce the states into signing up. SCOTUS (Roberts) could do America a favor by getting it right this time.

At some point the music in that video got desperately in the way…I kept looking for the June Taylor Dancers to come out.

This is video with a compilation of statements where Obama says his plan is TRANSITIONAL to single payer, and that we can’t get rid of the legacy problems (private insurance) immediately.

So at no point did the Democrats plan to let us keep our plans, it was always The Big Lie. We can keep them, till they are taxed out of existence. The self reliant are treated like infidels in a land of holy collectivists.

In a nutshell, Obama and the Dems claimed from the git go that the mandate was NOT a tax. Roberts said in essence ‘it’s constitutional if it’s a tax’ … So if the Obama and the Dems had one smidgen of credibility, you’d think they would have said ‘we said it is not a tax, Roberts says it is – so I guess that nullifies Obamacare’ … instead, the Dems more or less responded ‘oh well, I guess it’s a tax then and that makes it Constitutional, bitches’

Some have held that Roberts sold out or Obummer has something on him to coerce that verdict; I think Roberts was rather shrewd. Obamacare could have been nullified by simply holding Dems feet to the fire for the “not a tax” claim, while Roberts found it legal ONLY if it was a tax.

The “mandate” being a tax doesn’t nullify it. There’s no law that says it can’t be a tax. The only problem with openly calling it a tax was political; the CBO would have scored it as one, and it would never have passed. So they passed it under false pretenses; so what? How does that nullify it?

And no, Roberts didn’t sell out, he just looked at it honestly and said that just as Congress calling something a tax doesn’t make it one, so Congress denying that something is a tax doesn’t make it not one. If it looks like it tax, it waddles like a tax, it quacks like a tax, it’s a tax no matter what Congress chooses to call it. After all, where would we be if we went around taking Congress’s word for things?

Why in heII is this b*st*rd still roaming around free? He needs to be tried for treason, marched into the public square, and hung by the neck until dead.