Mark Udall heckled by own donor over War on Women obsession

Mark Udall heckled by own donor over War on Women obsession

They’re not buying it anymore. 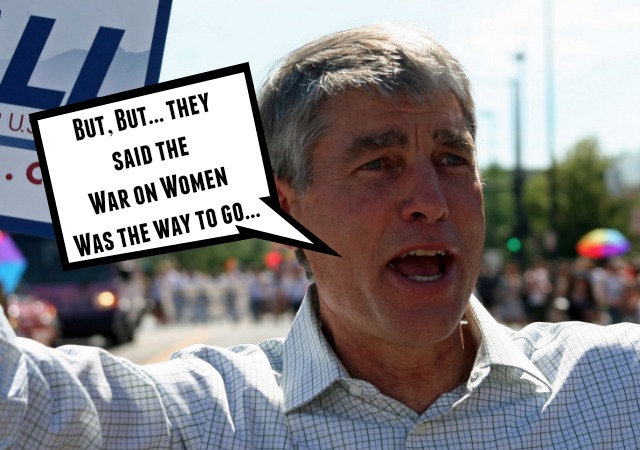 (Unless of course you’re Mark Udall, desperately trying to hang on to your Colorado Senate seat.)

Paul Lewis of The Guardian has the scoop:

Mark Udall had been looking confident, just moments earlier, when he climbed down the steps of his campaign bus and began addressing what should have been an audience of the party faithful.

These were people who had given up their Sunday afternoon to knock on doors in Centennial, in the southern suburbs of Denver, in search of votes for Udall.

In a populist, energising speech, Udall mocked the “plutocrat” Koch brothers, who bankrolled TV ads for his Republican rival Cory Gardner, and praised “the clipboard army” who were about to begin knocking on doors.

“I know you can do it. We’re surging. Ignore the polls.”

The crowd cheered and autumn leaves fluttered about the senator like confetti.

Autumn leaf confetti sounds delightful! But let’s pause here for just a moment. Because, fact check. Surge? I’m not sure where he’s getting “surge.” Real Clear Politics seems to indicate exactly the opposite, which is probably why Udall is imploring his faithful supporters to ignore the polls:

But now for the best part (emphasis added to highlight hilarity):

An angry voice from the crowd jeered: “That’s not the only thing you stand for! Jesus Christ!”

“That’s not the only thing you stand for!” The heckler was Leo Beserra, a 73-year-old who made millions on Wall Street and, since the early 1990s, has shared a generous slice of that wealth with Colorado Democrats.

Beserra’s grievance – that the senator’s narrow focus on abortion has backfired – is shared by others in the party, but rarely voiced in public and never in the midst of the candidate’s campaign speech.

Minutes after interrupting the senator’s speech, he vented, once again, to the Guardian. “I’m trying to figure out who in the hell decided this was how the campaign was supposed to go.”

He said he had just watched a Sunday morning talkshow in which Udall was ridiculed.

“Who is running the worst campaign? Him. Because fucking abortion is all he talks about. He should not talk about it any more whatsoever. There are so many other issues.”

Referring to the 2012 election strategy, Beserra added: “Two years ago it might have made sense. But didn’t they get an inkling that it wasn’t working [this year]?”

Ouch. It seems even the Democratic donor base is fed up with the tired War on Women schtick. No one, not even the people literally buying the War on Women, are buying it any longer.

But one trick ponies by definition know only one trick. NARAL‘s ridiculously bad ad running in Colorado harps on the same chord: Republicans, War on Women, banning access to contraception, rinse, repeat.

Which of course begs the question for where the Democrats go moving into 2016. With the War on Women finally blowing up in their faces, abortion restrictions on the rise, their foreign policy in a shambles (if you can even give it the honor of being a cohesive policy) and a country more concerned about the economy and the increasingly nasty mess of Obamacare, it will be interesting to see where the Democrats go from here.

“Who is running the worst campaign? Him. Because fucking abortion is all he talks about.” Also known as the Wendy Davis strategy …

Heh. Charlie Baker, running for pro-abortion governor here in MA — yes, that’s his campaign, like Udall — got endorsed by the Boston Globe. Go figure. In any case, I’ll enjoy not voting for him tomorrow.

Charlie Baker is the Republican candidate. Are you going to go all in and vote for Martha Coakley, the Democrat?

I can’t recall ever voting for a Democrat. I had the honor of voting twice for Reagan. Now all the GOP gives me are pro-abortion, pro-homo candidates. The more I vote for them, the more of them I get.

There is a pro-life candidate for gov here in MA, so I can send a message to the GOP. Otherwise, I’d sit it out.

I have to admit that I have never understood this line of thinking. The time to “send a message” is in the primaries. Once the candidates have been determined, however, you have to make a choice between the candidates who actually have a chance, usually a D or an R. I always vote for the R because while not perfect, they are always preferable to the D.

Jerry, today either Coakley or Baker are going to be elected to be the next governor of Massachusetts. By not voting for Baker, you are voting for Coakley. I used to live in Mass and know that whatever pro-life candidate you are thinking of voting for hasn’t got a chance of winning. That is the reality of politics in the Bay state.

I have never understood this line of thinking.

It’s been long in coming for me, and I don’t get many to agree. (I was almost relegated to the couch by my better half over Brown vs Coakley.) I just don’t see the benefit of your method. It inevitably moves leftward.

As an attempt to explain further, let me ask, do you have a non-negotiable limit? Something you could never vote for? For me to vote for a pro-abort, the issue would have to be something that trumps abortion. One example is Obamacare because it creates a new category of people subject to extermination. Romney merited my vote for that reason. Another example might be a KKK candidate. But short of that, two proaborts differing on fiscal policy just don’t pass muster. Neither deserves my vote. Additionally, I believe we will be held accountable for our votes, but that’s another subject.

I can’t say there is no “deal breaker” for a Republican candidate. Membership in the Klan, etc, would be one. However, the primary weeds those candidates out.

The fact remains, tomorrow either Coakley or Baker will be the Governor-elect of Massachusetts. Pretending like it doesn’t matter which one because you disagree with Baker on abortion is silly.

OK. We’ve established that a Klan candidate would be beyond the pale. If things changed, and Klansmen started winning primaries, would you hold, or cave? I’ve reached my threshold. Good luck to you.

Huh? Are you a troll or just an idiot?

(Been here longer than you, Jack.)

You have plenty of company, Jerry. I’m in NY-18 and my choice is between 0bama buttboy Democrat Sean Patrick Maloney and Republican Nan Hayworth, who is married to an abortionist and whose gay son is featured in her TV ads. I did vote, but Republican votes don’t count here anyway (looks like in NY-21 they will, though!). BTW, I’m a TP conservative; I no longer identify as Republican. Our party’s run by knaves and charlatans.

Here in Illinois all the Dumbocrat candidates are running ads with the specific intent of trying to scare women voters on “women’s healthcare” issues like abortion and birth control. According to the political ads, all those evil Republicans are scary extremists bent on taking away birth control and shutting down Planned Parenthood clinics. These guys are one-note Charlies – given the total mess they’ve made of the economy, it’s not surprising they want to focus on squirrels.

No, Democrats understand their only potential voters are the very stupid, the very gullible, and the woefully uninformed.

There are young college-age women, and even college grads, who actually believe Republicans want to ban contraceptives.

I blame 40 years of ever-increasing control of education at all levels by the federal government, unions, and liberal academics.

Dems could never win if they didn’t control all public education.

Personally I think voting for a RINO is always a bad choice. It not only blurs party identity but it educates no one about the principles that make our country strong. RINO’s vote Republican when their vote doesn’t count, but on those crucial close key issues who is it who crosses the line to vote with the Democrats? It’s always a RINO.

Maybe that is the reality of politics in the Bay state and elsewhere because the Republican leadership never promotes or backs a real Conservative. It’s time for a change and until you are really ready I will continue to vote on principles and not pragmatism.

So, does voting for a candidate who can’t win educate anyone about the “principles that make our country strong”.

Much as you may not like it, the country is center-right. In places like Mass, it is center-left. A vote for a candidate who can’t win is a vote for the worst candidate that can.