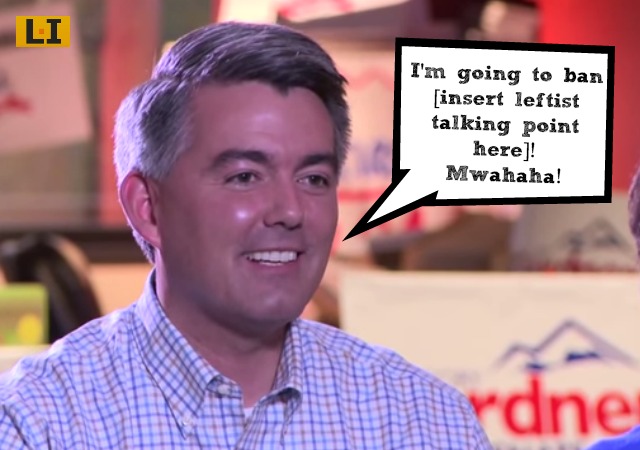 NARAL probably didn’t intend for their latest radio ad to be butt of every Conservative joke, but that’s exactly what happened.

The National Abortion and Reproductive Rights Action League (NARAL), issued a press release today announcing, “a new $450,000 ad campaign attacking Senate candidate Cory Gardner for his position against birth control. The TV, radio and online ads will run between now and Election Day and will be targeted at young voters, especially young men.”

“Cory Gardner tries to deceive Colorado voters on his opposition to birth control and his belief that politicians have a right to interfere in our personal, private medical decisions,” said Karen Middleton, Executive Director of NARAL Pro-Choice Colorado. “These ads highlight how Cory Gardner is on the wrong side of Colorado values and voters, especially young voters.”

Evidently, men are single issue voters who only care about birth control and in particular, condoms. At least that’s the prevailing theory of the Democrats these days.

The folks over at The Federalist recorded the radio ad for your listening pleasure:

Dude: They’re all out.
Lady: Did you try the corner market?
Dude: Of course.
Lady: Grocery store?
Dude: Sold out.
Lady: Drug store?
Dude: Come on.
Lady: So everyone’s sold out of condoms? How did this happen?
Dude: Cory Gardner banned birth control and now it’s all on us guys. And you can’t find a condom anywhere. And The Pill was just the start. Pell grants my little brother was counting on for college? Cory cut them. Climate change that everyone knows is weirding our weather? Cory flat-out denies it. Sweat Pea, Cory denies science.
Lady: Come on.
Dude: This guy has no idea what’s going on in the real world.
[Wayne’s World Scene Changing Music]
Narrator: Don’t let Cory’s world become your world. [Yada yada yada…]

I’m not sure what alternate “real world” NARAL is living in, but in my real world, men don’t use “Sweat Pea” unless the intent is to maximize condescension and land themselves a strategically placed punch to the face. And “weirding our weather”… I’ve got nothing on that one.

Regardless, the ad is hilariously awful and might take the cake for worst ad of the 2014 cycle. But it’s still early yet and Wendy Davis’ campaign is still alive (mostly).

[H/T The good folks of Twitter and The Federalist]

[Note: The title was changed shortly after publication to make clear that the claim was false.]

“I’m not sure what alternate “real world” NARAL is living in, but in my real world, men don’t use “Sweat Pea” unless the intent is to maximize condescension and land themselves a strategically placed punch to the face.”

Indeed. I don’t recall ever using that phrase, but if I did, it would be for the purpose of condescension, and I’d be damned sure I had the reach on her. 🙂

NARAL must think Colorado voters are too stupid to live.

As long as the mail is delivered or Amazon has a working website, people can have all the contraceptives they want.

Colorado voters stupid? Look who they elected governor and where their presidential electoral votes went. Not so bright!

I take your point, but there’s a difference between “I’ll try that Hope n’ Change crap cone”, and “Gorsh, honney, there ain’t no suits for lil’ jimmie, so he can’t go to town til we go to Kansas” stupid.

It’s obvious who has “no idea what’s going on in the real world” – the people who put out this tripe.

Lay off guys. You should never interrupt your opponents when they are making fools of themselves.