“Some adviser who never worked on our staff.” 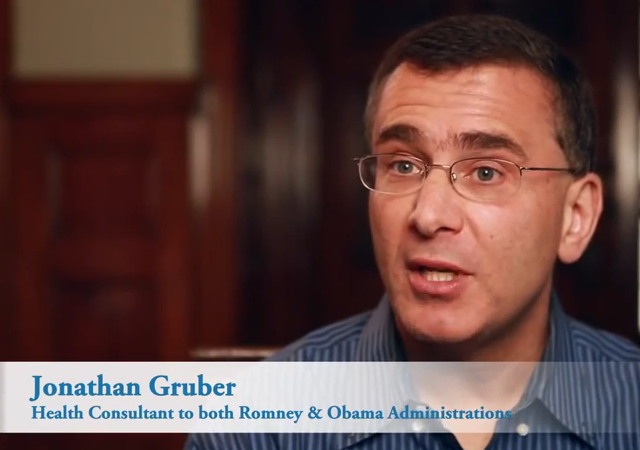 While in Australia this weekend, Ed Henry of FOX News asked President Obama about his connection with Jonathan Gruber. In typical Obama fashion, he claimed to have just heard about the controversy.

In Brisbane Australia, President Obama clumsily told Fox News’ Ed Henry that he ‘just heard about’ the controversy over Jonathan Gruber whom he described as ‘some adviser who never worked on our staff.’ He then went on to say that there was ‘not a provision of the healthcare law that was not extensively debated and it was fully transparent.’

In this video, you can hear Obama say the line about Gruber at the 0:45 mark:

Back in 2012, Obama was working very hard to tie Obamacare to Romneycare. This ad is an official Obama video from the president’s YouTube channel, and features a familiar face:

Well of course Obama doesn’t know much about him.

He just heard about all this from the media (and the media don’t want to share this scoop).

“burn the house down”…..somewhere I read, “defund the White House, in total”….no Air Force 1, no chefs, no help. no electrical, gas or solar power….shut it down tighter than the WWII memorial…..

“In the same way that Bill Ayers was “just a guy” from Obama’s neighborhood, Jonathan Gruber was “just an advisor” from Obama’s campaign.” Very pertinent observation that makes a lot of sense, thanks for pointing this out.

Don’t forget that Rod Blagojevich was “some guy I met at a baseball game”, but one can find a hundred or so photos of them together.

And 0bama didn’t know that the land where he built his Chicago home was part of a sweetheart deal with Tony Rezko.

Is this all 0bama’s fault? Well, according to science and stuff, when people start smoking pot (aka: Choooooom) early on, it messes up their brains. Makes ’em smaller and less able to make good judgments.

Maybe we’re being ruled by a brain-damaged, narcissistic tool of the elitist class after all. If so, maybe we need to apologize to Lyndon LaRouche. 😆

“Fully transparent”? What a freaking moron he is to think that anybody other than brownnosers are going to buy his whoppers.

Well, he can depend on the media. That’s all he needs. Doesn’t really matter what we think.

Obama thinks “transparent” is when one or both of the two parents has a sex change operation.

Puns? On a Monday?

Too much hilarity. Sometimes I wish I were clever. 🙂

It wasn’t extensively debated. In fact, most if not all of the Democrats who voted for this mess had never read the bill nor had their staffs read it. There was no time.

Well, considering he “won” “Lie of the Year” …. why would anyone expect any different?

“If you like you lying sack of sh!t President, you can keep him. If you don’t, tough luck. Period.”

Alternative headline: “Lying liar administrator lies about the lying liar employed to lie about the lies he was paid to manufacture, then lie about entire deception.”

Have I told you lately how much I despise this administration?

Tell us how you really feel. We are not yet certain.

I feel the same way. If his picture comes on the TV, I have to change the channel so I don’t throw up in my mouth.

Of course, we have to work harder at not letting the Left define the terms to their convenience. Transparency means letting the truth out – all of it.

“…to work harder at not letting the Left define the terms to their convenience.”

This is how I feel about the homosexual agenda, re-defining the meanings of words.

They are not “gay”

I never pass up the opportunity to correct someone when I hear them use that term.

Obama is still watching the video. He thinks that Obamacare will compensate for his trillion dollar deficits devaluing capital and labor. He’s also affiliated with a “charitable” organization doing an end-run of stupid Americans on the ground. Recycling or redistributive change was never so duplicitous since the great “green” revolution.

The question is: when will MIT tell Gruber that they don’t employ people who deliberately lie to Congress, the CBO and the public on matters of National importance? One would think that MIT would have *some* kind of standards of intellectual and academic honesty? Right? …. Right?

It is obvious that obama can say and do anything and the msm will not challenge him on it. He just lies openly now not even bothering to be mindful the past videos he has made proving his latest lie. Is this the fate of our nation? Where a bold face liar does not have to worry about being confronted with his prior video statements that contradict his latest fabrication? Pelosi is another graduate from the school of in-your-face lying.

Obama: Hey, he’s just some guy who lives in my neighborhood.

This may be a positive sign: Even the fever-swamp liberals from FireDogLake and Huff-Po are piling on now. How the White House Used Gruber’s Work to Create Appearance of Broad Consensus by Jane Hamsher, founder, FireDogLake.com

On the 29th Nancy-Ann DeParle, head of the very White House Office of Health Reform that Gruber was hired to consult for, posted perhaps the most misleading column of all on the White House blog:

She identified Gruber as an “MIT Economist who has been closely following the health insurance reform process” who had “issued a compelling new report.” There was no acknowledgment that her very own White House office had commissioned Gruber’s work.

Joseph Goebbels would be very proud of how the Obama administration has adopted his methods.

Hey, Professor Gruber: Is it comfy under that bus with Rod, Billy & Bernardine, Rev. Wright, Bammy’s Grammy and so many others? Ohhh…You say that the $-Half Million+ of tax payer bucks aids the the comfyness??

Is this the same Gruber who served on McHale’s PT boat? He was a real con man, too.

I’m a little sad with how convenient lying is for this administration. It’s beyond comedy and parody; they have no shame nor embarrassment each time they are caught.

It’s as if they are single celled organisms that spawn each day with no memory or history of the day prior and have preprogrammed in their DNA to say whatever is necessary to meet the day’s agenda. There is not an ounce of dignity left in the White House or in their congressional leaders.

I’m sad for the institution and I’m sad for us as a country that anyone calling themselves American.

If you lie to me in my life- I hold you accountable…your existence becomes untenable while I string you out on a barbed wire inquisition of every granular detail. You know… sort of like what the media does when a Republican politician “misspeaks”

I could blame the media, but they have become the same single celled organisms. I’m sad for our country in this regard.