Rasmieh (Rasmea) Odeh was found guilty earlier this month in federal court in Detroit of unlawfully obtaining citizenship by lying on her 1994 visa and 2004 naturalization applications.

In those documents, Rasmea falsely answered “No” to questions, among others, as to whether she “ever” had been convicted of a crime or been imprisoned. In fact, Rasmea was convicted in Israeli in 1970 of participation in the bombing of the Jerusalem SuperSol supermarket in which two Hebrew University students were killed, an attempted bombing of the British consulate, and other security offenses. Rasmea was sentenced to life in prison, but was released in 1979 in a prisoner exchange.

Needless to say, the jury only took two hours to convict Rasmea on the immigration fraud charge.

For a lengthy account of the evidence demonstrating Rasmea’s guilt both in Israel and Detroit, see our post yesterday, Rasmea Odeh rightly convicted of Israeli supermarket bombing and U.S. immigration fraud.

After the conviction in Detroit, Rasmea’s bond was revoked by the Judge, and she was taken into custody pending sentencing in March 2015. Rasmea moved for reconsideration, and the prosecution responded late yesterday afternoon.

The prosecution’s response (embedded in full at the bottom of this post) revealed information never before public about the underlying Israeli conviction and Rasmea’s conduct since then. This information, while not relevant to or admissible in Rasmea’s trial, was relevant and could be considered by the court in connection with post-conviction bond proceedings.

Here is an excerpt, but by all means, read the whole thing.

The government thus offers the following discussion simply to demonstrate that Defendant has been serially untruthful for decades, and thus cannot demonstrate eligibility for release on bond. See 18 U.S.C. § 3142(g)(3) (in considering whether to grant bond, the court shall consider “the history and characteristics of the person.”).

Beginning with her trial in Israel, defendant has consistently claimed that she was tortured. Defendant’s principal claim of torture is that her father was forced to attempt to rape her. Defendant claims that she only confessed to participation in the bombings due to torture, and that she is in fact not guilty of those offenses. The claims relating to the bombing are certainly and demonstrably false; defendant was the principal architect of the bombings at the Supersol which killed two people, and she personally placed the bombs at the British Consulate which caused damage but no deaths. The claims relating to her father also are certainly false, and thus undermine her entire narrative to the point that it most likely is untrue as well.

The prosecution filing then walks through the inconsistencies in Rasmea’s story of torture and denial of involvement in the SuperSol bombing, some of which we previously addressed in our prior post, and concludes.

What this recitation of evidence demonstrates is that defendant has been telling stories for many years without any basis in truth, and continued to tell them in the present trial, even after the Court told her directly that such evidence was not admissible at trial and could not be the subject of her testimony. Simply put, this entire course of conduct, culminating in defendant’s refusal to heed the Court’s orders to her, demonstrates her unreliability and untrustworthiness. Defendantcannot demonstrate by any standard, let alone clear and convincing evidence, that she should be released on bond pending sentencing.

In Rasmea Odeh we have another false and contrived victim narrative spun by the anti-Israel community, including the usual propagandists who frequently appear on campuses.

Indeed, Students for Justice in Palestine is making the supposedly unjust conviction of Rasmea into one of its national campaigns. 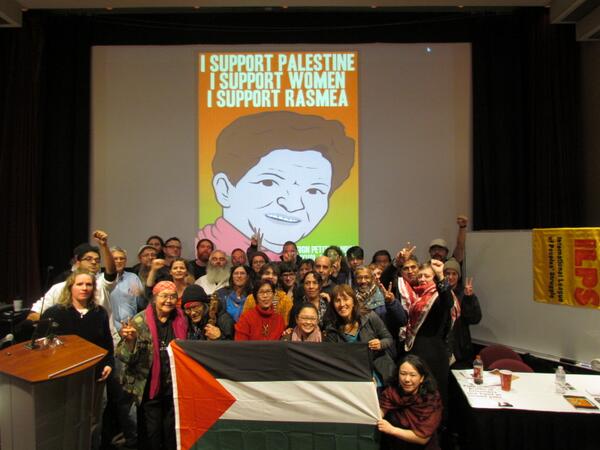 Rasmea is now listed in a banner being used on many anti-Israel websites and on Facebook, along with other anti-Israel “heroines,” like Angela Davis.

Nothing illustrates the deliberate delusion and dishonesty of the anti-Israel movement, particularly on campuses, than the narrative of Rasmea Odeh and Palestinians in general as victims, accepting no responsibility for their own actions.

Some people NEED to be locked up until they die.

She is one. If freed, she’d kill again.

Better to have her post $100M bail where every supporter pledges their home as collateral. Then watch her skip her sentencing, and then all those supporters finally realize the real character of this woman.

Have her plane crash, and I could go for the justice of that.

The Left loves such people. As long as you hate the West, they will be your snuggly bedfellows.

I’m just glad to see a terrorist finally getting their just desserts (so far). Hopefully this administration won’t pardon her.