NY Times: We Must Achieve An Iran Nuke Deal For Our Time

NY Times: We Must Achieve An Iran Nuke Deal For Our Time

A bad deal is better than no deal? 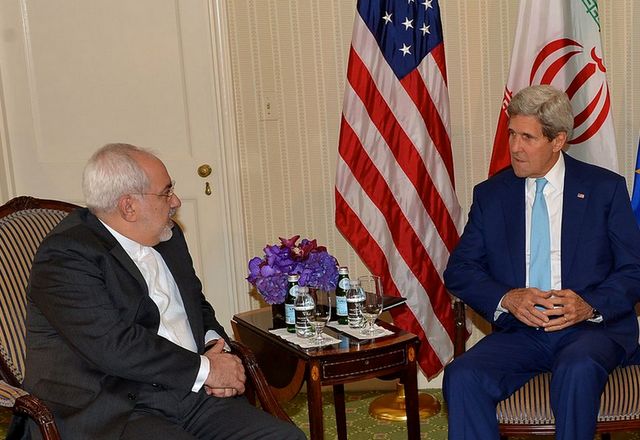 An editorial in The New York Times today about the ongoing P5+1 nuclear talks with Iran warns about the dire consequences of the two sides not reaching an agreement.

The consequences of failure to reach an accord would be serious, including the weakening of President Hassan Rouhani of Iran and his foreign minister, Mohammad Javad Zarif, who count as moderates in Iran, and who, like President Obama, have taken a political risk to try to make an agreement happen.

That would be terrible. Rouhani and Zarif would be weakened!  Or would it?

As far as the first question, well, they don’t call Ayatollah Ali Khamenei the Supreme Leader for nothing. In an investigative report last year, Reuters showed that Khamenei using the organizations under his control has amassed a huge fortune by property seizures.

More importantly, the Rahbar [the Supreme Leader] effectively decides who will or will not be the public face of his rule—that is, who will or will not be the president of Iran. Khamenei selects the 12 members of the Shura-ye Neghahban (“Guardian Council”), which is tasked with vetting and approving presidential candidates based on their allegiance to the ideals of the Vilayat-e Faqih. The Western media often calls Iranian leaders like ex-president Mohammad Khatami and current president Hassan Rouhani “moderates” or “reformers,” but the Guardian Council’s policies render such a characterization absurd. No genuine moderate or reformist candidate can get through the Council’s dragnet. In effect, then, the vetting process and the Rahbar’s ultimate authority negate any possibility of material change in Iran’s foreign or domestic policies.

In other words not only is Rouhani not the ultimate power in Iran, he wouldn’t have achieved even his limited authority unless he was a true believer in the system. Rouhani is only a “moderate” in that he’s willing to talk to the West to achieve his goals, but his goals and views are identical to those of Khamenei.

In fact Rouhani’s record before last year is that he was very much a part of the conservative clerical establishment.

Aside from weakening Rouhani, the editorial doesn’t specify any other cataclysmic event that would occur in the event that no deal is reached. Unfortunately, it doesn’t even suggest that a bad deal could be worse than no deal (to use Secretary of State John Kerry’s phrase). In fact the editorial does all it can to obfuscate that possibility.

An assertion near the beginning of the editorial obfuscates the stakes:

Iran’s nuclear program has been viewed as a threat by the international community from the day it was first disclosed in 2002. While Iran insists that its program aims only to produce nuclear energy, the size and scope of its activities have raised fears that Tehran might one day produce a weapon. Any deal that can be accepted, or sustained, must be structured so that Iran cannot one day make a dash to build a nuclear weapon without the world having enough warning to intervene.

“[D]isclosed” here is ambiguous and meaningless. The truth was that in 2002 both the Natanz enrichment facility and the Arak heavy water reactor were disclosed by Iran, involuntarily.

Here’s how The New York Times reported the disclosure:

Russia has long acknowledged aiding Iran’s nuclear power program, but it has always denied helping it with any project that could help Tehran build a weapon. Russia’s atomic energy minister, Aleksandr Rumyantsev, was quoted by the Itar-Tass news agency today as contending that Iran had violated no international rules in building the two nuclear sites that were disclosed last week through commercial satellite photographs. The United States said it was “deeply concerned” about the two sites, which have been known to American intelligence agencies for more than a year.

Iran only acknowledged the existence of the two sites once they were found out due to “commercial satellite” photography and couldn’t deny their existence anymore.

In a day of high drama at an economic summit meeting, American, British and French officials declassified some of their most closely held intelligence and scrambled to describe a multiyear Iranian effort, tracked by spies on the ground and satellites above, to build a secret uranium enrichment plant deep inside a mountain.

The new plant, which Iran strongly denied was intended to be kept secret or used for making weapons, is months away from completion and does nothing to shorten intelligence estimates of how long it would take Iran to produce a bomb. American intelligence officials say it will take at least a year, perhaps five, for Iran to develop the full ability to make a nuclear weapon.

The problem with any inspection regime is that its effectiveness is limited by unknowns. As the 2002 article reported:

Iraq used similar loopholes in the late 1980’s to receive a certification from the atomic energy agency that it found no evidence of a weapons program. It was only after the Persian Gulf war that inspectors discovered that the country was only six months away from producing a weapon, a fact that an Iraqi general all but confirmed last weekend.

Three different nuclear facilities that could produce fuel for a nuclear bomb have been uncovered by others, not admitted by Iran. This leads to the question of what else is Iran hiding. Former IAEA official Olli Heinonen recently made headlines when he noted that Iran possibly had enough material to build 5000 (undeclared) advanced centrifuges.

For nearly a year, Iran has adhered to an interim agreement that froze and rolled back its nuclear program. This experience offers some hope that, subject to a rigorous verification regime, Iran will be able to fulfill a more permanent agreement. President Obama took the right step recently when he wrote to Iran’s supreme leader, Ayatollah Ali Khamenei, to nudge him toward a nuclear deal. The other leaders should weigh in as well. This agreement is too important to let slip away.

It is simply not true that Iran adhered to the Joint Plan of Action (JPA) last year that allowed a relaxation of sanctions in exchange for Iran’s taking a number of easily reversible steps to roll back its enrichment program.

For one thing, Iran did test an advanced centrifuge in violation of the terms of the JPA. More generally despite a number of provisions in the JPA requiring Iran to cooperate with the International Atomic Energy Agency (IAEA), Iran has stonewalled the agency in terms of answering questions about its past nuclear research.

An inspection regime to prevent an Iranian “dash” towards a nuclear weapon can only be effective if the full scope of the Iranian nuclear program is known. Given Iran’s record of deceit and its continued noncompliance (not just with past Security Council resolutions, but even with last year’s watered down JPA) the editorial’s fear of no deal is misplaced.

The fear, rather, should be of a bad agreement that allows a tyrant, responsible for much of the sectarian bloodshed in Syria and Iraq (and elsewhere), to acquire a nuclear weapon,

Obama’s(Cough!!)Goal: B’yotch slap Bibi and Israel. Gasp with awe and disapproving amazement when Bibi takes care of Israel’s literal survival by doing all he can to destroy Iran’s nuke capabilities, including ground raids on the sites.

ORRrrrrrr…John Boy Kerry and His Infantile Majesty Obama express(Faux)frustration when Iran attempts to destroy Israel and all its inhabitants.

Tyrant Obama the Liar is insane. He apparently believes that enabling Iran to gain nuclear weapons will guarantee “peace in our times.”. You know just like Chamberlain’s Munich agreement with Hitler provided peace.

Chamberlin…for all his faults…was no dummy. He knew…as did Churchill…that GB was caught with its pants down, and was trying whatever desperate ploy he could to buy some time.

Maybe it even worked, to some extent…

Surrender is often an easy way to get peace, and that seems to be Obama’s plan.

Obama isn’t so much insane as vile.

Man, where was I just reading about a new JournoList style group to proactively push a deal with Iran?
Just too much lib/media manipulation going on to remember it all…

A leading liberal think tank in Washington, D.C., has begun enlisting its associates in an “all-hands-on-deck effort to support” the Obama administration as it seeks to ink a nuclear deal with Iran by the end of the month, according to emails obtained by the Washington Free Beacon.

And now, we give you – The New York Times.

About the only military experience most NYT staffers have is picking up sailors in gay bars.

Every time John Kerry gets involved in anything as Secretary of State – and I mean anything – the same question keeps coming back to me: How does a self-confessed war criminal get confirmed for a cabinet-level position?

To quote Michael Corleone “You can have my answer now, if you like. My final offer is this: nothing.”