Remembering who the Real Boss is in Iran

Remembering who the Real Boss is in Iran 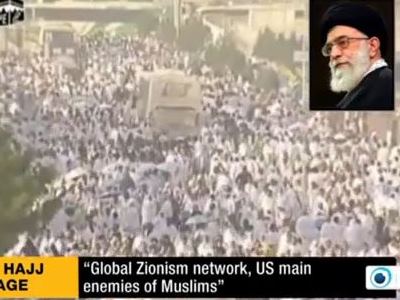 As an antidote for all of the happy talk to emerge from the first round of P5 + 1 talks with Iran about its nuclear program, Anne Applebaum’s column this week provides ample documentation that President Hassan Rouhani isn’t such a reformer.

Read Applebaum on why we should not be optimistic about nuke talks with #Iran. It remains an appalling Sharia state http://t.co/SSdSG9UZj9

In Iran’s spots haven’t changed, whatever it tells negotiators, she observes:

In the week of Sept. 23, when Rouhani was at the U.N. General Assembly in New York, more than 30 Iranians were reportedly executed without due process of law.

This is not at all surprising when the nickname of the Justice Minister, is “Minister of murder.”

No, we oppose Iran’s nuclear ambitions for one reason: because we object to the Islamic Republic of Iran, a quasi-totalitarian state that since 1979 has been led by brutal, volatile men with no respect for the rule of law. Their regime is a “domestic” problem for many Iranians, and it’s a major problem for Iran’s neighbors and the rest of the world.

The most amazing part of this op-ed is that Applebaum doesn’t mention “Israel” once. In so much of the reporting and commentary about the just restarted nuclear talks with Iran, Israel is placed in opposition to the new found consensus that with the election of Hassan Rouhani, Iran has truly moderated. Applebaum shows decisively that Iran is a threat to the Middle East and the whole world. Maybe Netanyahu was the child who had the bad manners to point out that the cleric’s moderate new clothes were a figment of everyone’s imagination, but the danger he warns of doesn’t just threaten Israel.

But even if the romantic vision of Rouhani and his entourage were true, it ignores a very inconvenient truth: the real leader of Iran is not the President but the Supreme leader, Ayatollah Ali Khamenei. The president’s authority does not exceed that of the Supreme Leader.

And what does Ayatollah Khamenei think of the West that his now welcoming his subordinates? It doesn’t take an investigative reporter to uncover this; the Supreme Leader published his speech in honor of this year’s Hajj on his official website.

Arrogant governments, headed by the USA, conceal their true character with the help of comprehensive and advanced propaganda tools. By claiming that they support human rights and democracy, they deceive public opinion in different countries. They speak about the rights of all nations while each day Muslim nations feel- with their bodies and souls- the fire of discord more than the past.

Would any of those brave journalists who are hyping President Rouhani’s or Foreign Minister Zarif’s moderation or Westernized manners ask either if they agreed with their boss or if they would be willing to condemn his words?

This means that Islam strongly rejects any idea and belief which views a number of Muslims and believers in Ka’bah and monotheism as people who are outside the circle of Islam. These orientations which are based on takfirism, which have become playthings in the hands of the treacherous Zionist politicians and their western supporters- commit serious crimes and shed the blood of Muslims and innocent people, and the people who claim to be religious, who call themselves clerics and who fuel the fire of fitna between Shia and Sunni and other denominations- should know that the hajj pilgrimage will thwart their claims.

This really isn’t the stuff of compromise. But these are the uncensored words of Iran’s true leader. Given Khamenei’s uncompromising rhetoric, why would he allow moderates to run his government? The answer is that Rouhani and Zarif are not moderates, except in tone and that’s useful. It’s a useful subterfuge if his goal is to achieve both a nuclear bomb and sanctions relief.

Ah, that’s the nasty old sod who likes to kiss little boys on the lips.

He’s a nasty piece of work, that Khamenei.

Khameini is a ruthless killer.

Bloodthirst is a conditioned, learned appetite gained from the practice of Islam and jihad – and there is no Islam without jihad.

Islam is intolerant, aggressive, hateful, misogynistic, violent and cruel in Somalia, Mali, Chechnya, Libya, Iraq, Pakistan, Palestine, Afghanistan, Syria….wherever Islam exists, it exists to exterminate and dominate all infidels. Moreover, all the sects and groups are at war with each other.

There is no country called “Palestine”. Otherwise, we are in total agreement.

Some clever Israeli hacker took control of one of Iran’s new signature drones and used it to whack the Grand Poobah Hisself?

That sounds like something them Wascally Jooooooooooooooooos in the Mossad would do. Hell, if this old bastard slipped in the shower, they’d blame Mossad. Shower? Sorry, my bad. He probably rolls in the dirt.

“Da Jooooos” could have a lot of fun with Moslem paranoia, driving around with RDF rigs pointing at mosques, putting cheap cameras on pigeons and other birds in the area, etc.

Although, my favorite is to use Tesla’s neighborhood shaker: http://www.intuitor.com/resonance/tesla.php
sounds like loads of fun.