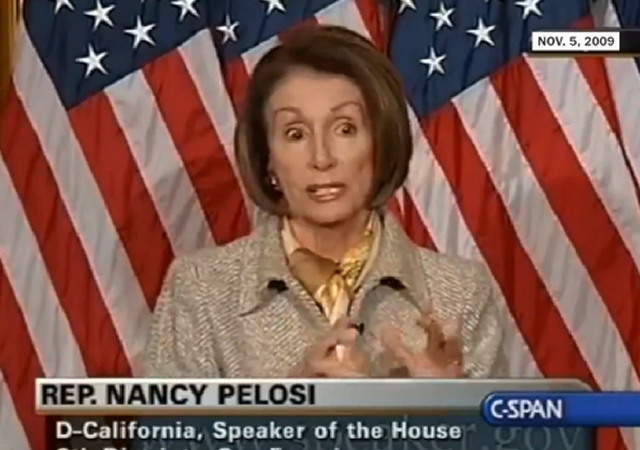 Now that Obamacare architect Jonathan Gruber has been exposed for the liberal pseudo-mastermind that he is, people are beginning to ask Democratic Party leaders how much they knew about him.

Nancy Pelosi denied knowing him yesterday, but she’s been caught in a lie.

Nancy Pelosi says she doesn’t know who Jonathan Gruber is. She touted his work in 2009.

House Minority Leader Nancy Pelosi (D-Calif.) said Thursday that, not only did Jonathan Gruber not play a significant role in drafting Obamacare, but that she doesn’t even “know who he is.”

Many have pointed out since then that Pelosi’s office has cited Gruber’s work in the past. That’s notable, but it’s very unlikely Pelosi herself wrote those press releases herself or even participated in their drafting.

But then there’s this: Pelosi herself has also mentioned Gruber and his work — back in November 2009, at the height of the Obamacare debate.

Here’s the video. Who do you believe–Ms. Pelosi, or your lying eyes?

For their part, the liberal outlet VOX has a perfectly logical Voxplaination for all of this.

Except for one little problem…

Hmmm. She says she doesn’t know Gruber, but there is much on the record proving she does. It’s inconceivable that an elected official would lie, let alone the House Minority Leader, so something’s really amiss here. Hmmm.

Perhaps she is using “know” in the biblical sense. In this case, she was so busy “knowing” the rest of us she really never had time to “Know” Mr. Gruber.

Could you retype that, only slower.. and lower? Unnnh.

In that sense, then Pelosi has “known” all the American public – through the broken condom of Obamacare……..

Great cartoon on that at:

Time for another session in Rm 101 of the Ministry Of Love.

Rags, I see you have a stalker. Just so you know, the down-ticks aren’t mine.

No. I never figured they were. There is a small cadre of haters out there, and I frankly revel in their attention.

It would be more fun if they were posting their venom, but this is all they have guts for.

It is illustrative of how a politician will simply lie whenever trapped with a difficult question. Just lie. If they all lie, it becomes the norm – and sure makes politickin’ easier.

I think of lying every time Bob Beckel gets the wrong end of argument .

Obama’s spokesman disagreed about any deception, and said it is the Republicans that are really being dishonest.

“Sure, you caught our big lies on Obamacare, no new taxes, Benghazi, global warming … but TRUST US, Republicans are even worse.”

Another example of why it must be so much easier to be a Democrat politician.

A Democrat lied? Hard to believe. By the way, is this guy Jonathan’s brother?
http://diehard.wikia.com/wiki/Hans_Gruber

From WAPO, by way of Powerline:

To quote singer Lourde, “So there”.

Question – since the lies to Congress were so pervasive, by so many people, aren’t there some perjury charges out there waiting to be filed?
(some testimony was under oath, I hope)

Exactly. Hey, we had to know whether Roger Clemens lied to CON-gress. Why not go after Gruber for the same reasons of “truth,” transparency” and the “sanctity of House investigations”?

At least an ethics charge.

Nancy said it, I believe it, and that settles it.

Can I sell you a bridge?

I have a bridge, between my heart and Nancy’s. *sigh*

I’m trying to see how many times I can make Rags barf in one blog week.

Pelosi claimed Gruber was just commenting, while the Democrats were writing the law. So fuhgettaboutit.

But Gruber clarifies intent of the deployed deceptions. He was paid a half million to write in such deception, with Pelosi saying we had to pass it to find out what is in it. So she knew, even if she had not read it all.

So here’s my current hypothesis:

Gruber’s big mouth is the smoking gun, not just on Obamacare, but on the whole operative process the leftists use on every issue. They want to do X which only gets 30% approval from Americans. So they craft a narrative Y, and have lobbyists write legislation that corkscrews their underlying “contagion” Z into law, with bad results of Z deferred for years, under glorious five year plan Y.

They issue the necessary assurances (keep your doc and plan, prices lowered … period) when their real plan is to destroy private insurance. The contagion kills A, the American way, in this case private insurance, which opens the door for their X, after the dust of orchestrated chaos Z settles.

* Immigration … no, we have more enforcement than ever, they said for years, till we discover they are counting immediate returns as deportations. And they are blocking border guard functions, encouraging a flood of illegals with amnesty implied promises. Intent is a new electorate.

* Global warming … planned lies and excuse for EPA to regulate everything via perfectly safe (and beneficial) CO2. Intent is money and power, control over industry, hamstring America.

* Race wars … protect the innocent black children with candy (Trayvon & Brown) from being “hunted down like rabid dogs” … except both were large violent instigators. Intent? GOTV and divide America.

Maybe a Gruberesque comic book could explain this modus operandi to the general public in better detail. The arrogance of Gruber has provided the clear window into the inner operations of the Democrat mob of subversives. That “intel” must be exploited, as these are not just misguided souls.

Gruber singing is admission to fraud that tends toward sedition, as intent is to subvert the American process, especially in light of the many lawless acts of Obama.

RE: “Gruber’s big mouth is the smoking gun, not just on Obamacare, but on the whole operative process the leftists use on every issue. They want to do X which only gets 30% approval from Americans. So they craft a narrative Y, and have lobbyists write legislation that corkscrews their underlying “contagion” Z into law, with bad results of Z deferred for years, under glorious five year plan Y.”

Guess what, San Fran Nan? We ordinary Americans are not as stupid as you and your ilk would like to believe.

And you’re a lying piece of scum. You deserve no respect, only contempt. Respect has to be earned – a foreign concept to you, no doubt.

The same goes for your boss, only double ~

The words “Jonathon Gruber” are the two tatoos above her eyes. Ask her plastic surgeon.

Isn’t the system supposed to be set up that actual Congressmen (Senators and Reps) are the ones physically writing the bills? How does some schmuck that isn’t elected by you or me get to write the bills?

Well, no. That is kind of naive.

And it extends to the regulatory agencies. We know that enviro-fascists write EPA stuff.

(Sung to the tune of Barry Manilow)

“I write the law that make the voters cry.

I write laws where I lie and lie…

I write the laws so oldsters die and die.

What drugs is she on? She’s got a pharmaceutical affect.

She has a artfully hidden IV drip bag on her hip filled halfway with vinegar, half with vodka.

I thought that was her douche bag?

Or is that Steny Hoyer?

Sure she knew him, cited him, used him, but that was to get ACA passed. Once that was done, she no longer needed him or to remember his name.

Nancy’s been at this a long time, since she was a little girl helping her Daddy loot Baltimore. She’s stepped on a lot of people, used a lot of people to advance her career and her bank accounts. Once they are no longer useful, they are forgotten.

There are few of the ‘little people’ Pelosi has to remember, mainly the senior staff who come when she calls for coffee, or wine, or her drool cup.