“There’s something weird going on among even the educated crowd.” 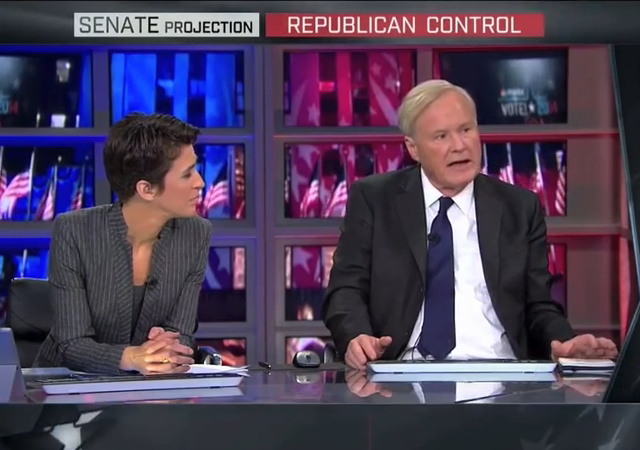 Did you watch MSNBC on election night last week? Probably not. Like most of America, you were probably watching FOX News.

Not to worry. The Washington Free Beacon watched MSNBC so we wouldn’t have to.

I told you I was looking forward to more of this. So here’s more:

MSNBC has a serious ratings problem.

This story has been noted for some time, though it’s getting a fresh look today from some media analysts.

Though it has mostly happened quietly, which may be a comment on the cable network’s larger status in the media landscape, MSNBC has seen its ratings hit one of the deepest skids in its history, with the recently completed third quarter of 2014 generating some record lows.

During the third quarter, Ms. Maddow reached an average of 183,000 viewers in the audience component that most matters to MSNBC’s advertisers, viewers between the ages of 25 and 54, her lowest total since she started her show in 2008.

More worrying is the slide for “Morning Joe,” which has, for much of its time on the air, enjoyed status as one of the most talked-about shows in media industry circles. Now the heat around the show seems to have dissipated. For four straight months, and six of the last eight, “Morning Joe” has trailed CNN’s new morning entry, “New Day.”

RE: “Like most of America, you were probably watching FOX News.”

(I don’t do “cable” so I watched the local FOX afflilate.)

TrooperJohnSmith in reply to Not A Member of Any Organized Political. | November 11, 2014 at 1:14 pm

I watched L.I., The Conservative Treehouse, Free Republic and of course, Drudge.

Who needs TV. Paddy Chayefsky was right. It is.

Not A Member of Any Organized Political in reply to TrooperJohnSmith. | November 11, 2014 at 1:58 pm

Thanks for the web sites. I’ll have to check out the Consevative Treehouse!

Don’t miss some of the great comments in the articles Aleister linked – such as this one.

“Tiredofbias44
10/16/2014 2:34 PM CDT
Diversity. Yea right. The value of diversity is the premise that varying experiences gives a more robust and interesting conversation with the audience.

MSNBC simply gathered a cast based only three key factors 1) they mirror the key voting demographics of the Democratic party 2) willing to express a point of view fed to them from the sleazy bowels of Democratic machine and 3) an eagerness to punish all of their political opponents. …”

“As long as the cabal could hide Obama’s gross incompetence from the public, the Democratic party supporters would reap trillions in profits.

But like every pyramid scheme, the trick to winning is getting out before the public catches onto the con. In Obama’s case it was 4.5 years. The last 1.5 years was the awakening…”

Matthews: “There is something weird going on, even among the educated crowd.”

Maybe, Chris, YOU are the ignorant lout, ensconced in your Manhattan (not Kansas) co-op, insulated from the real world. Maybe you and the rest of the media elites need to move to the heartland and see the REAL America.

Hint: Real America is not between the Lower Hudson and East Rivers or stuck on a patch of ground between Virginia and Maryland. It’s not.

The next time these fools fly to Cali-forn-ya, they need to request a window seat.

That fool doesn’t even know what he’s talking about. The Des Moines Register did NOT endorse Ernst in the general election. They endorsed her in the primary.

As a bona fide member of ‘flyover’ country, (IOWA) I say a big “AMEN” to this ! Watched James Webb interview on Iowa Press TV; he remarked that he was ‘surprised at the level of knowledge and the sophistication of the questions” he’d been asked by Iowa voters on his trip around the state .

REALLY ???? These people need to get out more ! Move the seat of government to the Midwest/Plains and let sanity return !

Oh I did flip over to PMSNBC, because Schadenfreude.

The tears of a liberal nourish the flower of freedom and allow it to grow.

“Maybe, Chris, YOU are the ignorant lout, ensconced in your Manhattan (not Kansas) co-op, insulated from the real world. ”
*****
Unless he has recently moved, Tingles, who has implied that he lives in majority AA Wash. DC, in fact lives in Chevy Chase Village, MD. As of the 2010 census, Chevy Chase Village is 93% White and 0.5% AA.

Is Chrissy still claiming Obama sends a tingle up his back…..?

JackRussellTerrierist in reply to Not A Member of Any Organized Political. | November 12, 2014 at 1:30 am

Chrissy didn’t say that. He said obola sent a tingle up his leg. UP his leg. UP. He never said anything about the tingle traveling further than that, so we can safely presume that said tingle completed its mission when it arrived at his groin.

Hilarious, the moment when Chrissy & The Pussycats realize they’ve been living by entirely false assumptions of elite liberal dominance.

CNN had the best coverage while the votes were still be counted, IMHO. Mostly because of John King breaking the vote down county-by-county. I did flip over to MSNBC a three or four times and everytime Chris Matthews was mentioning Hillary’s name.

Sorry, who is Chrissy and is piecework rates?

Chris Matthews, of MSNBC. He’s a political talk show host that they repeat about eight times a day. He’s a big, nasty, bullying, loudmouthed propagandist and liar extraordinaire for the ‘rats.

I believe “piecework”, as used in the post, is a sarcastic figure of speech pointing out that MSNBC is circling the drain quickly, implying it has no money to pay full salaries to its bellicose libtard hosts so they are now just getting paid for “piecework” hits on conservatives and the ‘pubs.