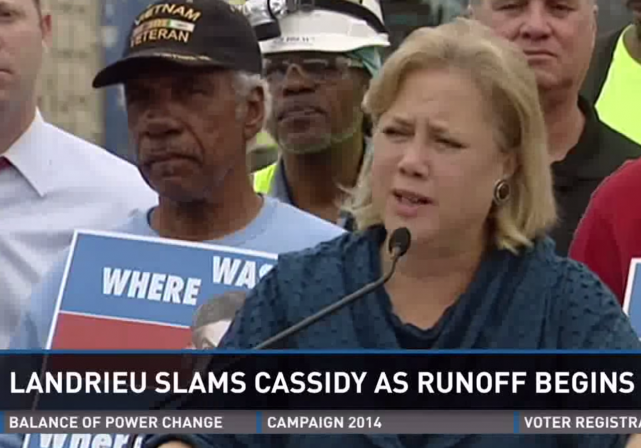 Louisiana has some crazy election rules and so rather than a decisive Cassidy victory Tuesday night, the battle for the bayou Senate seat will drag on for another month. December 6 to be precise.

Things have probably looked better for Landrieu. Two days ago, the Democratic Senatorial Campaign Committee (DSCC) decided to cut some of their ad buys for Landrieu. Politico reported:

The Democratic Senatorial Campaign Committee is canceling at least some of its advertising reservations for Sen. Mary Landrieu ahead of the December runoff in Louisiana.

“Mary Landrieu is a proven run-off winner and we support her 100 percent,” said DSCC spokesman Justin Barasky. “We are going to make ongoing determinations on how best to invest in the race. We made the initial reservation when there were concerns that the rates would skyrocket but they have stabilized, giving us more flexibility to make week-to-week decisions.”

The DSCC made a similar move in the race between Alison Lundergan Grimes who was looking to unseat Senate Minority Leader, Mitch McConnell. They pulled ad buys in mid-October. McConnell went on to win by more than 15 points.

Yesterday, someone in Landrieu’s camp thought it was a good idea to hold a press conference, print out signs, and demand to know where Republican challenger, Bill Cassidy was during the rebuilding of the VA hospital following hurricanes Katrina and Rita. And thus the “Where Was Bill” campaign was launched.

… only to crash moments later: 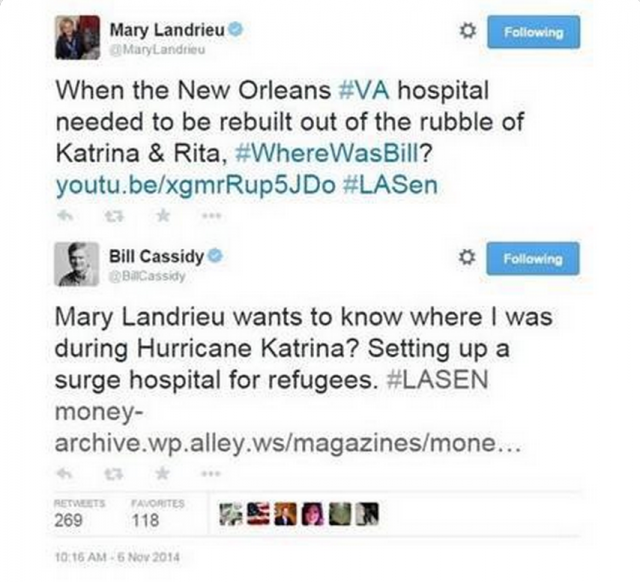 To make matters worse for Landrieu, the NRSC and RNC are sending a grassroots army to Louisiana to ensure Cassidy’s victory. Amy Miller reported:

From this morning’s RNC e-mail blast:

We had great, historic Republican victories on Election Day.

But here’s the deal: there is still ONE key Senate seat left to win — Louisiana.

Only 1% – just 16,400 votes – separated the Democrat incumbent from the Republican frontrunner in the Louisiana Senate race on Tuesday. And now they’re in a neck-and-neck runoff race.

This weekend, the RNC is sending hundreds of our staffers into Louisiana. We must secure ONE more seat to strengthen our newly won Senate majority, so we can stop President Obama’s radical agenda and enact pro-jobs, pro-growth policies.

President Obama and Senate Democrats are not happy about Tuesday’s results. They are pouring in resources to hold onto this final seat and keep liberal Senator Mary Landrieu in office.

The RNC is ready for the challenge — but we need you to stand with us one more time.

Canceling ad buys doesn’t automatically signal the Democrats have abandoned Louisiana though, nor does it necessarily undercut Landrieu’s ability to fundraise and purchase ads from the campaign coffers. But it certainly doesn’t make her job of securing re-election any easier. With the balance of the Senate no longer in question, the DSCC may have decided to cut their losses and live to play another day.

Republican momentum is yet another obstacle Landrieu will have to overcome. Pitching Cassidy as someone who also voted with Obama 97% of time (he did not) is not a winning strategy, but it’s the one her campaign seems to have adopted. Landrieu’s campaign is desperately trying to paint her as the Senator who was there for Louisiana when Cassidy was not, a line that might appeal to some, but not those facing higher insurance premiums and other realities of the Obama economy.

Smartly, Landrieu’s camp has shifted away from the War on Women, a mantra that cost many a Democrat their job this election cycle. And so Louisiana becomes a petri dish of “safe” Democratic talking points. Will scaremongering Social Security reform, paycheck fairness, and student loan reform pay off for Landrieu?

1) They were within 2 points of each other with a SECOND REPUBLICAN siphoning off 14% of the vote. If Tuesday’s election had been 1 on 1 Cassidy would have won by 10+ points

2) Obama’s imperial immigration declaration is going to simply CRUSH what tiny chance she had of winning.

Frankly I wouldn’t be surprised if Cassidy wins by 15-20 points.

Further, before December 6 the voting public will be able to see obamacare’s new, increased rates, which obama hid prior to the November 4 elections.

But but but … that’s not fair to Democrats!

I’d put together a TV spot featuring Miss Piggy’s digs in the DC area, and her Big Daddy’s place in Louisiana where she DOESN’T live.

Over those images, I’d make large with Miss Piggy’s hate on the people of her state and region. You could couple that with her cynical BS about social insecurity, paycheck fairness (you need one to worry about “fairness”), her love of ObamaDoggle, etc. I’d tie her to Barracula (Gulf [of Mexico] War leader) and executive amnesty emperor.

That should about do it.

Landrieu is the Democrats’ #EntitlementBarbie.

Stick a fork in her, she’s done.

Both national parties borrowed money in the last weeks of the campaign. The DNC and the DSCC don’t want to have to dig a deeper hole when they should be gearing up for 2016.

The DSCC had reserved tons of time early for the post-runoff period as a hedge against multiple races going to the runoff and ad time being priced at a premium. They just locked in the early price, then cancelled the reserved time at the last minute so they aren’t committed to buy it. We do the same thing sometimes.

DSCC can still come back in with ad buys, there is no shortage. But will they? With control of Senate already lost, they aren’t going to borrow much unless Landrieu makes a real surge – a tall order for a three-term incumbent.

If I were Cassidy, I would stress also her many public statements about her commitment to her neighborhood which she regards as home – in the ritzy part of DC. Mary is a popular hostess and active community organizer – in DC.

Surrogates can point out that her real estate broker husband got rich from listings from her political donors and lobbyists seeking her ear, a very convenient way to pass an envelope along.

But don’t take this one for granted. Louisiana Democrats are notoriously corrupt and there isn’t much too crooked for them to attempt.

Thank God they have an honest Republican Governor.

Landrieu: “You have come to a world without hate, without fear, without conflict, no war, no disease, no crime. None of the ancient evils. Landrieu seeks tranquility, peace for all, the universal good.”

Of course, they stole it from Return of the Archons episode of Star Trek the Original Series. You know, that episode with zombies zapped by a politician who forces the people to think like him.

It has worked so well with Democrats, hasn’t it?

It’s just heartbreaking that the American electorate has tolerated the kind of scum infesting our political system. Yes, it seems the electorate has woken up – at least for this election cycle – but we seem to tolerate this kind of toleration rather pathetically.

That other Republican who ran as a third party candidate should be real proud of himself. Jerk!

I’ve watched enough of those dumb Law & Order episoses to know that you never ask a question unless you know the answer. Landrieu and her staff did a piss poor research job.

Get out a great big ol’ meat fork, suitable for managing an entire suckling piglet, and stick it in the ol’ girl.

She voted for obolacare, and the obolacare folks just accidentally admitted they lied and played their supporters for fools…….and it’s all over the news and the ‘net.