Illegal Immigrant to CNN: I was inspired to cross the border by Obama

Illegal Immigrant to CNN: I was inspired to cross the border by Obama

Who could have guessed this would happen? 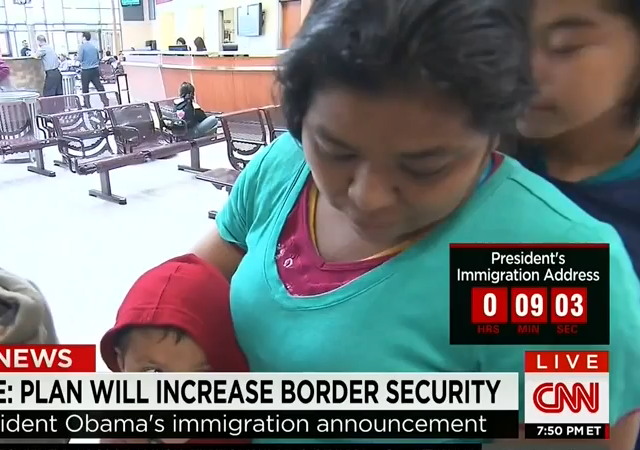 Remember those “intended immigration consequences” I was talking about yesterday?

The word is out.

Brendan Bordelon of National Review captured this exchange on CNN:

“Did the possibility of immigration reform inspire you to come now?” CNN’s Alina Machado asked the Central American migrant waiting for a bus ticket on Thursday.

Media responses to Obama’s plan have been mixed but I like this piece by David Harsanyi of The Federalist:

Obama Puts The Republic Out Of Its Misery

“This is how democracy works,” Barack Obama lectured the country before giving everyone the specifics of his expansive one-man executive overreach on immigration. If you enjoy platitudinous straw men but are turned off by open debate and constitutional order, this speech was for you.

Modern Democrats aren’t the first political party to abuse power – far from it. Obama isn’t the first president to abuse executive power – not by a longshot. But he has to be the first president in American history to overtly and consistently argue that he’s empowered to legislate if Congress doesn’t pass the laws he favors. It’s an argument that’s been mainstreamed by partisans and cheered on by those in media desperate to find a morsel of triumph in this presidency.

Much like the changes they made to the filibuster, Democrats will eventually rue the day they said nothing about this.

That reporter… how can she pretend to be so naive? How can she expect anyone to swallow her caveat that Obama’s amnesty had no effect on the other people in the line at the bus station?

And CNN reporters want to keep their jobs? Not enough. If they did, they’d start reporting honestly and more thoroughly.

Maybe after they’re unemployed for a while and have time to think, maybe it will begin to sink in.

What makes you think she’s “naive.”

Most reporters, so called “journalists,” get a college degree in nothingness, nothingness of self-vanity. They are among the dumbest of the dumb.

you may be a nice person but….go the hell home.
fix your country.
we’ll probably help you with that.

“Democrats will eventually rue the day they said nothing about this.”

I’d say that time of ruing will begin not later than five minutes after oaths of office are taken on January 5, 2015. The truly intelligent ones have already begun … witness their abandonment of Mary Landrieu.

The leaders of second and third-world nations are thrilled to be relieved of their “burdens”. The leader of America is thrilled to dispense opiate to a new generation. He is thrilled to escape scrutiny for devaluing capital and labor. He is thrilled that Americans are too stupid to appreciate that fitness is not a species-wide principle and that normalizing dysfunctional behaviors has consequences.

I have a question for the lawyer types. Obama keeps claiming he’s basing his action on “prosecutorial discretion.” He also uses terms such as “deferred action.”

So, just because he’s willing to overlook certain crimes, can he force people to commit them? By that I mean must employers hire illegal aliens knowing that they’re not legally eligible to work in this country no matter what document he gives them. He says so himself; he can’t change their status. They’re just benefiting from Obama’s prosecutorial discretion. Which would mean both the employee and employer are violating the law, but knowing that this President will wink at the violation. Why should anyone go to the expense of hiring and training an employee knowing that “prosecutorial discretion” can end in January 2017? At which point action would no longer be deferred. And I see no reason to believe an incoming administration would have to overlook my previous two years of being in violation of the law. I wouldn’t hire an employee just to take advantage of a temporary tax break so why should I do this which is even worse?

And if the DoJ sued me to force me to hire an employee we all know isn’t legally eligible to work in this country, otherwise there’d be no need for Obama to exercise “prosecutorial discretion,” wouldn’t that put the lie to this whole farce?

If Obama wanted to exercise “prosecutorial discretion” and order the DoJ not to prosecute medical marijuana dispensaries that’d be one thing. Forcing my pharmacy to sell it would be a bridge too far, woudln’t it?

I am not a lawyer, so this may or may not be the answer you’re looking for, but….

What Obama is doing with immigration is not “prosecutorial discretion” (hereafter PD, for brevity). PD was built into the criminal legal system for rare occasions when pursuing criminal charges and penalties does not further the interests of justice. The clearest example is a self-defense slaying; if there’s no exemption in the assault/murder laws for self-defense, but the defender is also not a “guilty party” regardless of the letter of the law, PD gives the prosecutor an “out” and lets him/her avoid pressing charges.

It was never intended, however, to be used for broad “amnesties” of otherwise illegal behavior. Saying “we won’t pursue marijuana violators” doesn’t make marijuana any less illegal, any more than granting “deferred action” for illegal immigrants make their presence in the U.S. less illegal. And neither action removes the sworn duty of the President to “take Care that the Laws be faithfully executed” (U.S. Constitution, Article II, Section 3).

And no, the Administration cannot (or at least, should not) be able to force anyone to do anything illegal, even if it’s “not illegal” under their watch. The letter of the law and the intent of Congress both say it’s still illegal. Forcing you to do it anyway is a clear violation and deprivation of your 5th Amendment rights; the correct judicial response would be to dismiss all charges against you. It’s also a federal crime, IF you can find a prosecutor willing to press charges against (most likely) his/her boss(es).

Just my non-lawyer $0.02, worth everything you’re paying for it.