What to make of Cosmo’s GOTV push? 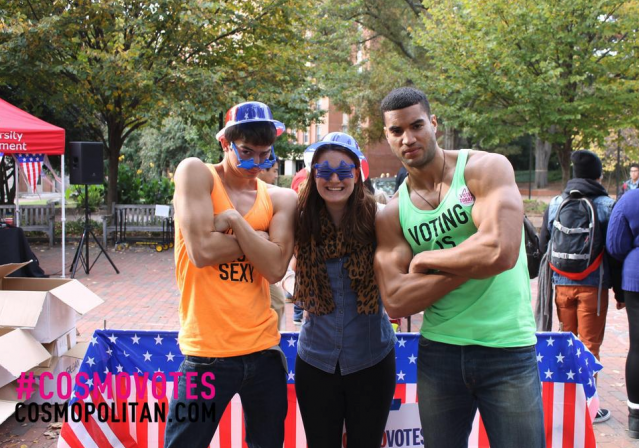 Cosmopolitan Magazine is hanging out in North Carolina this fine election day to encourage college kids to vote.

As we previously discussed:

Students at North Carolina State University won a contest with Cosmopolitan magazine to have “party bus” filled with models transport students to and from the polls on Election Day.

Social media is full of all kinds of reactions to Cosmo’s get out the vote efforts (GOTV). Conservatives, by and large, see this as a shallow, unintellectual approach to a very serious matter. To that I say, “duh.”

There exist many people in these great United States who are shallow, unintellectual, and easily influenced by whatever is socially acceptable. And it’s precisely these people who will turn out to vote for the promise of a neon “Voting is Sexy” t-shirt.

Intelligence is not a requirement to vote in this country.  Yet the obvious bears mentioning: those that will turn out to vote for a party bus full of models still have a vote to cast. Cosmo is speaking their language and it’s working. Quite frankly, the right could learn a thing or two here: appealing to voters in a way that’s culturally relevant to them works.

In a perfect world, the masses would be politically engaged, watch candidate debates, spend time over scotch and cigars discussing the issues du jour and then head to the polls to make a careful and rational decision on who should represent their interests. This is also how most Republicans think the voting base should act. Sadly, this is nowhere near realistic.

Also at issue here is the nexus of “feminism” and a Cosmo-style GOTV push. “What kind of message does it send to young women when they’re bribed to vote by hot men?!” the right posits. “How hypocritical is the left that they cry “feminism” and then use sexuality to lure votes!?”

To the former, I’m not sure the intelligentsia are the ones flocking to snap a pic with a buff model holding a “CosmoVotes” sign. And if they are, I certainly don’t see the harm here. Giving college kids things college kids are interested in as a means of encouraging civic engagement seems dare I say, smart. Those already polically engaged in college are likely in some way, shape, or form, tangentially involved in a campus political club. And the latter? The latter is perfectly consistent with the left’s current definition of feminism. They’ve reduced feminism to anatomy and nothing more. (Which we all know is the exact opposite of actual feminism).

At the end of the day, I’m not opposed to having a party bus full of hot male models accompany me to the polls to make my careful and rationally decided ballot choices. Sounds like a great time. I’d also probably wear a neon “Voting is Sexy” shirt. Because, why not? And let’s face it, voting is sexy.

Car makers use sex to sell cars, and Hamas uses it to sell murder. This is mild, and harmless.

Cosmo called to pick me up for da bus, but I was out of the office.

Something tells me that the male models Cosmo brought out might think that geeky coeds are an easy lay, but not a good lay.

I’m sure that N.C. girls can produce a very attractive flower garland, every bit as good as Hawaiian girls.

Anyone know who that hot guy is on the left?!