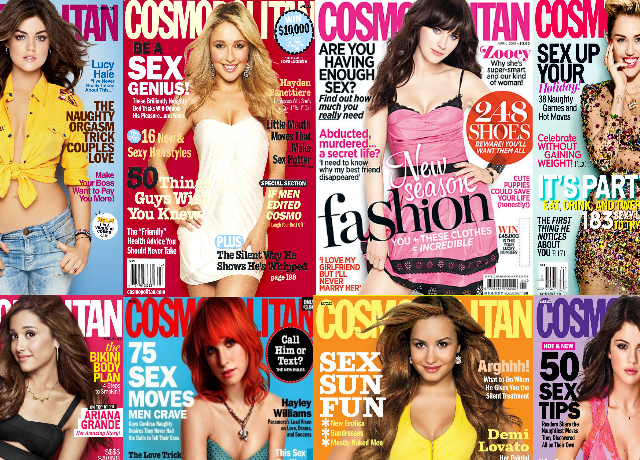 Democrats have used a lot of gimmicks over the years to gain support and votes for their candidates, but their latest efforts to use sex to sell their decidedly unsexy candidates might just win the award for Most Ridiculous Millennial Outreach Gimmick of 2014.

Students at North Carolina State University won a contest with Cosmopolitan magazine to have “party bus” filled with models transport students to and from the polls on Election Day.

“On Election Day, a bus decked out with snacks, swag, and models (hi, this is Cosmo) will roll up to North Carolina State University, the winner of Cosmopolitan.com’s first-ever party bus contest,” the magazine said. “The bus will shuttle students back and forth to a nearby polling location so students can vote.”

The university was entered into the contest by sophomore Camden Willeford, Cosmo said.

“This election is not a light matter here in NC,” he said. “The weight is on the students of North Carolina State University.”

The students’ big “win,” of course, has nothing at all to do with the fact that Cosmo’s choice for Senate, Democrat Kay Hagan, is within a point or two of losing her seat to Republican Thom Tillis.

Here’s what Cosmo has to say about the race:

A champion of choice or a guy who gutted a motorcycle safety bill to tack on abortion restrictions. A proponent of economic mobility or someone who said he wants to “divide and conquer” people on public assistance. A supporter of marriage equality and the Violence Against Women Act or a man who brags on his own website that he “pushed a ban on gay marriage, pro-life protection laws, and required drug testing for welfare recipients.”

The North Carolina Senate race is a no-brainer: Kay Hagan is the best choice for the state. But while her views and those of her opponent, North Carolina House Speaker Thom Tillis, couldn’t be further apart, the polls put the candidates in a tight race.

Few Senate races are more important this election, and few candidates as odious as Thom Tillis. Kay Hagan has led on women’s rights in the Senate, and re-electing her will move us forward on fair pay, on reproductive choice, and on equal treatment under the law. The best Tillis has to offer is that, in 2014, he finally maybe thinks women should be able to get the Pill.

Hagan’s lead is trickling away, but she could still pull this thing out. Although the Cosmo bus will assumedly transport voters of both parties to the polls, I’ll be curious to see just how fun and balanced that little field trip turns out to be.

And “The Best Little Whorehouse in Texas” was based on a true story…. just saying, when it comes to playing hinky with elections, if you can think of it, someone got ran out of town for it in Texas.

Since it is the Dimorats, shouldn’t that be “The Best Little War on Women” – brought to you by the sexist Democrat party?

A great idea! Like hip flasks at football games. And happy hour drink prices. Truly an American innovation to get out the vote. And I bet wel’ll see similar promotions from Republicans in the next election cycle. This transcends ideology. And anyone criticizing it is a Communist!

Did you forget the /sarc tag, or are you really that much of a putz?

Still, the news that college coeds read Cosmo is sad. One would hope even a state school would have some standards.

But the truth is that the Hagan vote depends on big turnout from the Raleigh-Durham area. If it’s a ‘party bus’ with booze, they can pick up a lot of potential Democratic votes on the way to the polls, as has been shown in Madison and Milwaukee, WI.

NC State is a very good quality engineering school. However, this year students are not allowed to register and vote on the same day, so they’re going to have to remember where they said they lived when they registered and voted early two years ago. Voters have to state their name and address.

Oh when are they going to grow up. They must know that they need the guys from the covers of Metropolitan to be on the bus too else it won’t be swank enough to attract those dressed to the nines college dudes who like Sex in the City and GQ magazine! When is this war on women who dress up like men ever going to end. I mean, really! /sarc

We need to put GOP wet noodles McConnell, Presbus, Boehner and Karl Rove on that bus. That’ll tamp-down any sexual energy or charisma.

Hey, we all work in our areas of comfort and experience.

Andrew knows a lot about crime and shooting people.

Rags, you need to be real careful walking on that ice. It’s not the same thickness everywhere, if you catch my drift.

The next democrat invention will be a GOP “War On Sluts.”

As a thirty year-plus resident of the state of North Carolina I have zero problems with busloads of models rolling in. There’s no story here. Leave it be, folks. I’ve got this.

IF they become a problem, you can send them to Texas.

You DO know it’s MALE models, right? ONLY male models. To get out the slut vote. Except male models are statistically more likely to be gay. Irony.

When I was a student the ladies at this Ag School were known as Cow Ed’s. Things have improved in the last half century.

PS. I married the Co(w)ed that beat me out for the rifle team.