Protester pushed her sign into Cornell Review reporter to try to get him to stop filming. 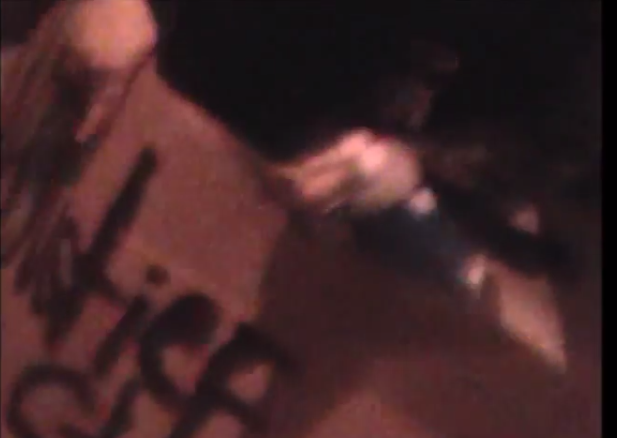 Casey Breznick is the Editor in Chief of The Cornell Review, the conservative Cornell undergraduate journal and its blog, The Cornell Insider. Casey also writes for Legal Insurrection and previously College Insurrection.

Casey has done a lot of great reporting for the Review on political events, such as the Martha Robertson campaign, “Rape Culture” protests, and also on the anti-Israel Students for Justice in Palestine protest at Ho Plaza on Cornell’s campus on November 19, 2014.

That Ho Plaza incident also has been reported at Legal Insurrection, based in part on Casey’s work for the Review blog:

On Tuesday night, November 25, Casey covered for the Review the Ithaca community vigil regarding the Michael Brown case. The vigil quickly turned into a street protest in which roads were blocked in downtown Ithaca and cars were trapped, leading to police intervention.

In the Cornell Insider post about the protest, Casey recounts how two of the non-students involved in the SJP Cornell protest spotted him and tried to get him to stop filming.  One of them, kat yang-stevens, pushed her sign into Casey.

There also was excellent coverage of the Ithaca Ferguson protest event at The Ithaca Voice website, How did calm candlelight vigil in Ithaca erupt into major disruptive protest?:

These criminals know they are being allowed to riot like the maniacs they are, because of Obama’ hatred of Whites. Can’t wait till the real shooting starts. That should diminish America’s biggest problem in short order.

Casey should sue the crap out of those shrieking harpies.

Though that would require SOME suing…

That situation just called for liberal amounts of OC spray. Maybe if these folks started getting faces full of pepper spray for doing this silly crap they would learn to control themselves.

That Kat character is going to get herself arrested for assault if she keeps reacting like that to being recorded. Heck, Casey probably could go ahead and press charges if he wanted too, he already has the evidence.

Further enhancement of Casey’s case, for future incidents (and with this kat character you KNOW there are going to be more incidents*), would be having multiple cameras recording, documenting the assault and battering on another camera holder.

*This is what this character does for a living? What a life!

I don’t suppose they even recognize the irony of chanting “No justice, no peace” at a “peaceful” protest?
Blocking ordinary citizens from going about their day is bound to garner lots of sympathy and support – don’t you think?

“No Justice, No Peace!” = Give us our predetermined result regardless of evidence or the law or we are gonna burn and break stuff.

Simple assault and battery and on video too ! No arrest made?

I have an excellent way to deal with “kat”….it involves eating a lot of cooked cabbage and drinking some chocolate milk. I would bring tears to her eyes!

No. The message the protesters sent is that they have no idea what justice is, that they do not think, and that they are incapable of self-governance.

The initial and continuing demand of the Ferguson protesters has been to indict, try, and convict a police officer who properly performed his duties after being attacked by a thief, beaten, and then rushed by the same thief.

People who demand the sacrifice of individuals for the sake of “larger issues” are asking for injustice.

Of course! Being a Collectivist MEANS that individuals are only factors in a scheme. Bricks in a wall.

What Michael Brown WAS is not significant. What he can be styled to represent…by any tortured means…is all that’s important.

What Wilson can be forced into representing by lying, misrepresenting…again by ANY means…is his only utility.

It is all about groups, never individuals.

Did not see much in the video, but these Ivy League “revolutionaries” gave me a laugh. Did they take lots of selfies?

Looked at the wrong video. Think that these people are their own worst enemies and will turn people off the more they are seen in public.

Blocking traffic while shouting juvenile slogans at the people trapped in their cars certainly won’t win those people over to their side!

I thought it was GREAT, how it calmed everyone down. If it went on much longer, they all would have been in a trance! And NOBODY dared interrupt it because…native.

It would be wonderful if someone investigated the authenticity of that, though.

My guess is that it was out of a Monty Python routine that wound up on the cutting-room floor. Or Mel Brooks.

I would have punched those women unconscious. And that “Native American” chant is about as authentic as Iron Eyes Cody or Ward Churchill.