Remember when her supporters laughed at Abbott being in a wheelchair? 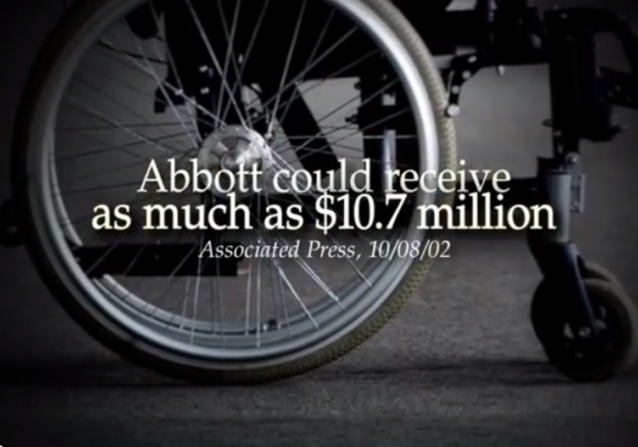 This thing speaks for itself.

Remember when Battleground Texas supporters of Wendy Davis laughed at Greg Abbott being in wheelchair?

The line of attack by the Battleground Texas people was exactly the line of attack in Davis’ current video — that Abbott is in a wheelchair but has not sympathy for others, as if being a Judge means cases should be decided on sympathy: 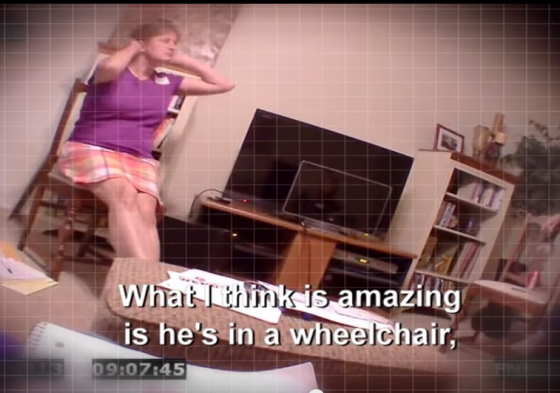 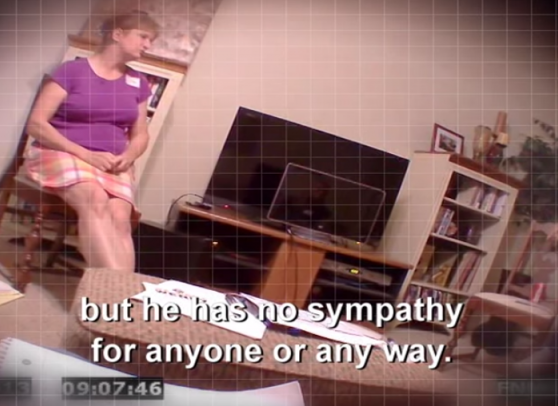 Back then Wendy said it was abhorrent: 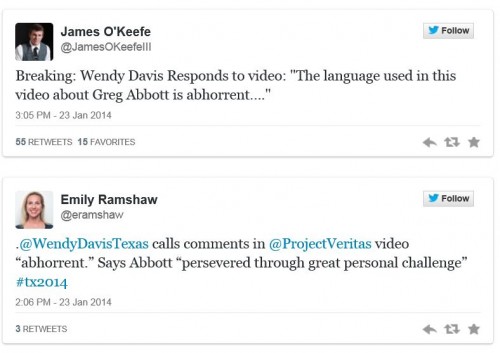 At least Wendy Davis ends her campaign with her dignity intact… Wait, no, there it goes.

you're still doing better than wendy davis… RT @Aaron_RS: 4 yo just puked all over me.

Whoever approved it should be fired http://t.co/0O2dhmH3AE

Oh man, this Wendy Davis ad — talk about hitting below the belt… http://t.co/rE8zMxzKxM

Read from the bottom up. pic.twitter.com/OgbrkOEaDO

Hey, remember when Democrats nationalized Todd Akin? Let's demand that Democrats in other races & the DNC condemn Davis over this ad.

Every media outlet that demanded that GOP candidates answer for Akin had better do the same with Democrats and Davis.

Wendy Davis unveils their new advertising manager for the homestretch of the campaign. #TXGov pic.twitter.com/8OYOy3gzNd

Update 10-11-2014 — Criticism against Wendy Davis is coming fast and furious from just about everyone except the truest of believers.

Remember when Wendy enjoyed the most positive headlines? Those were the days, my friend, Wendy thought they’d never end: 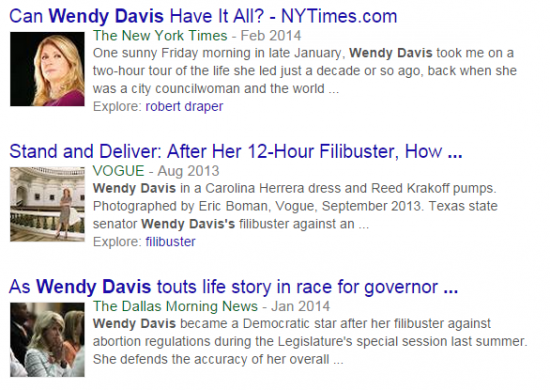 Negative ads work, those who use them well get elected, and all of a sudden the reason for all the problems in our country becomes clear.

So this is the disabled equivalent of race traitor, then?

I hope that politically speaking, she crashes and burns, hard.

Dagumit. How are the ISIS guys crossing the border into Texas supposed to find out where the highly explosive ammonium nitrate is if Texas keeps it a secret. Sheeeez.

A little comparison. For those who are okay with eumulating Democrat tactics (re: Mattera and the Lerner ambush), is this something the GOP should copy as well? Rep. Tammy Duckworth suffered horrific wounds in the Iraq War. Should the GOP use that against her, or does that cross a line?

You consider Lerner and Duckworth to be in – any sense – equivalent cases?

You missed my point. Even more bizarre.

So… because of an ad calling out Abbott as a self-hating disabled person and traitor to wheelchair-bound kind, you have concluded that a journalist encountering a key figure in an abuse of power scandal in a place not her own private property is equally repugnant and worthy of equal scorn?

He tried asking Harry Reid a question in the halls of Congress and Reid never glanced while hired muscle slammed him against a wall. Was that repugnant on Mattera’s part too?

You might want to reread what I wrote, since you clearly misunderstood it.

No, but they aren’t comparable.

The Lerner interview was fair game. She was in public and the questions being asked were about her behavior as a public servant. If she chooses to run and duck the camera, then go up to a stranger’s house and demand to be let in, that’s on her.

Whereas, to make an issue of Rep. Duckworth’s disability is clearly wrong — she was injured in the service of our country, and her disability has nothing at all to do with her politics or behavior.

Which is of course why we’re condemning the Davis campaign for the wheelchair ad.

So you tried to get us to compare apples and oranges, and now you’re acting butt-hurt over the fact that we refused to rise to your troll.

agree with Dr. Steve. Your comparison blows and you get defensive.

I don’t see where I acted butt hurt or defensive (as the comment after yours charged), unless by defensive you mean “challenge you do reread what I wrote and see that I didn’t say what you claim I said.”

The comparison is not Duckworth, Abbott, and Lerner; those are examples. The comparison was lefty tactics versus right tactics. The thread I referenced could safely be summarized as having declared that the tactics of the left are acceptable to emulate. I was simply pointing out that, having taken that broad stance, the right could exploit a candidate’s physical condition, since the left did it first. By pointing that out, I was challenging the conclusion from the previous thread that tit-for-tat is an acceptable political tactic.

What Davis did was despicable. That was my first comment. What I find equally despicable is that some would suggest that, since the left did something first, it’s okay to emulate–Duckworth being an obvious, potential target. Like it or not, that’s the can of worms that was opened with the tit-for-tat mentality, and I was merely pointing that out.

If that constitutes bizarre, butt hurt, trollish behavior in your mind, then so be it. I don’t comment here very much, but, since you’re the one who made the charge, I challenge you to scroll back through this site and offer some evidence that I’m a troll or a MOBY or something. You won’t find any.

these libtards hate the name Abbott…. same in Australia….

We have Tony Abbott as our Prime Minister and the libtards over here hate him with an absolute passion.

“What I think is amazing is he’s in a wheelchair, but has no sympathy for anyone or any way.”

That could be “amazing”, if that’s your point of view.

Or, it could be inspiring. Greg Abbott has obviously learned to cope with the rigors of a professional life from a wheelchair and adapted to overcome his setbacks. This gives him a unique perspective on the dignity of people with disabilities and that it is, in fact, possible to lead a relatively normal life – a perspective that Ms. Pink Sneakers doesn’t have.

Personal example: One of my in-laws is blind. He holds a full-time career supporting and assisting other people with disabilities. He’s raised children into normal, well-adjusted adults. He also has little-to-no sympathy for those who hide behind their disabilities, take advantage of others’ charity (i.e. take more than they need), and live the “woe is me” lifestyle when a nearly-normal life is possible (granted, sometimes it’s not, but that’s rare). He can’t help that he’s disabled, but refuses to let that define him.

Following this example, I have to salute Greg Abbott for finding a way to contribute to society despite the wheelchair, rather than being reduced to a societal drain because of it. That Wendy Davis’ campaign would ridicule him for that is beyond low.

It’s sad how individual accomplishments are devalued and your only value is how much you are deemed to support a political agenda for a particular disadvantaged group. And if you’re part of that group but not part of the grievance industry, you’re a traitor.

Not that any of this is news, but it’s still sad.

I am feeling grouchy and cynical right now (yeah, I know: so what else is new?), so that is probably coloring this response. But I have a sick feeling that this will likely boost Davis’ standing among the majority of her supporters.

And the media will give her a pass. As usual.

Golly, I bet a FULL exposition of the cases cited (lied about) would lead any fair-minded person to see he was a good feller who followed the law.

Just like the last round of lies this outfit attempted.

“Mommy Dearest” Davis is just a bad aftertaste in Texas now. The voting is just a formality.

According to a Breitbart.com article on this ad, a Real Clear Politics “poll of polls” puts Abbott ahead of Davis 42% to 39%.

I was stunned into silence.

I will truly grieve when Davis is elected.

OK, I was right to be stunned, the actual RCP site puts Abbott at 51.3% and Davis at 40.0%. Thank you Breitbart.com for giving me one hell of a scare. That’s the margin I’d heard of for months and months, not a mere three points with lots of room for fraud (voter ID law invalidated).

Dammit, Bourque. Reading your post stunned me. I read your 42/39 cite from RCP and thought, “Damn! It was 51/40 just the other day! WTF?” Ten seconds later I read your correction -just enough time for the nasal projectile ejection of four ounces of blistering hot cocoa all over my monitor. Backspatter on the walls Dexter Morgan would find fascinating. It could’ve been another couple ounces, but the marshmallows eventually blocked off my nostrils and dammed the flow.

Yeah, that’s about what I was feeling too…

I hope an example is made of the woman. Just a good clean political shellacking.

and so politically toxic that her pol career is OVER

That “invalidation” of the Texas Voter ID law isn’t going to survive an emergency appeal and stay demand from the 5th Circuit.

EVERYBODY in Texas has been gearing up for the ID law. We’ve had signs in our County Courthouse here in El Paso since January or February regarding “Proper ID” to vote.

It almost sounds like one of those parody political ads SNL used to do in the 80’s; “Greg Abbott ran over an innocent little puppy in his wheelchair.”

The only way it become worse is if Wendy Davis had Joe “Stand up Chuck” Biden come in and campaign for her.