Wait: Teachers Not Ready to be Armed, but They Can Dodge Bullets?

Wait: Teachers Not Ready to be Armed, but They Can Dodge Bullets? 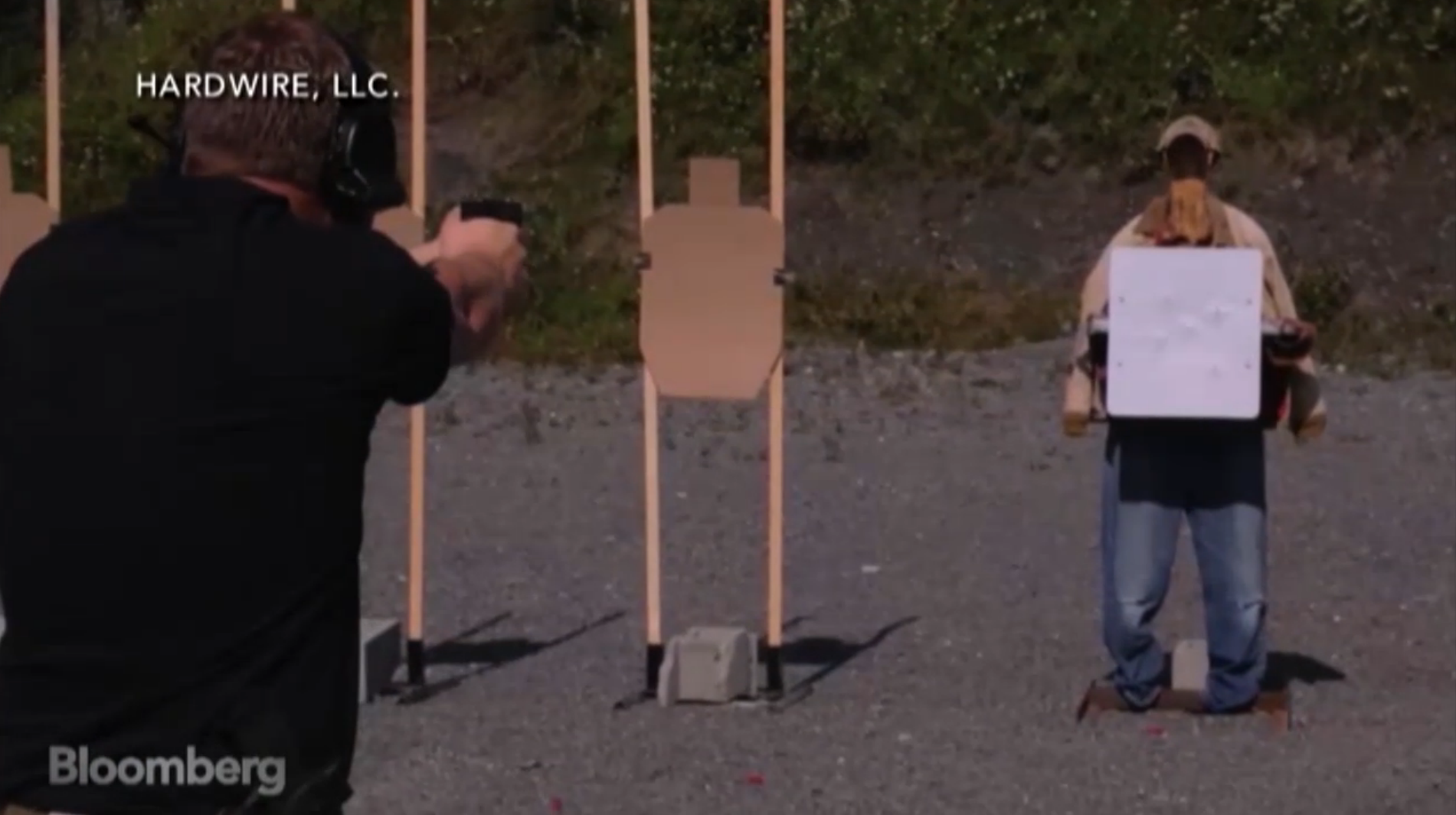 So, people send me stuff. Which I love. And sometimes what they send makes me want to both laugh, and cry.

Today I was sent a link to a video on the Bloomberg news site, about a company named Hardwire that has for years provided high-tech armoring materials to combat vehicles in the Middle East wars.

Of course, those wars are drying up (ha-ha, right), so companies serving that “market” now find themselves seeking alternative customers.

In the case of Hardwire they’ve decided to take their high-end armor material, Dyneema, and use it to make small bullet-proof whiteboards for use in schools as shields–no, I’m not kidding, as shields–against active shooters who may attack as in Sandy Hook.

Bloomberg’s video embeds early an utterly trite quote from Obama, and then starts with the company’s pitch:

So, kids as infrastructure. Ok, sure, why not.

Then they proceed to a video clip in which a teacher hunkers behind a two-square-foot shield as a “bad guy” peers in through the window in the classroom door:

There are, of course, proven techniques (thanks, Israel, again) for dealing with active shooters (whether insane or religiously motivated–but I repeat myself) who enter a school to murder students. Lock down. If you’re in a classroom, lock the door. If there are windows, block them so attackers can’t peer in. Attackers know they have only a few minutes before the school is invaded by armed law enforcement, and that they don’t have time to attack locked fire doors, especially if they can’t be sure there are targets inside.

If you are not in a classroom, get to one or flee the school entirely. DO NOT HUNKER DOWN IN PLACE.

Of course, following Obama’s statement that if something could help save children, we’re obligated to try it, we could also arm responsible teachers. Nothing interferes with the efficient slaughter of innocents like coming under fire yourself.

What will most certainly NOT work is trying to defend a classroom of students–or even a single teacher–with a two-square-foot shield. Fortunately, Hardwire is kind enough to provide video evidence of this obvious truth:

One doesn’t need to be a firearms expert to recognized that there is PLENTY of target area left outside the boundaries of that Hardwire shield. The video also accurately portrays the typical distance at which a teacher might be confronted by an armed psycho:

Now, if the teachers have Captain America style abilities, and can deflect incoming bullets as they come flaming in, I guess they’ll be OK. At least, if they can do it for the duration of a 30-round mag. And maybe another 30-round mag. And another.

School shooters are not, and never have been, stopped by defensive tactics. You either deny them targets in the first place, or you bring the fight to them.

I’m shocked that Mr. Tunis wasn’t willing to hold the white board while someone sent a few rounds of 00 down range.

No kidding. I could have saved myself a lot of time and simply posted the video, no text, just a headline that said “#eyeroll”.

But Professor Jacobson has standards. 🙂

Man I hope they don’t want school nurses to go the Captain America thing, because Me in a spandex outfit does not even bear consideration. 😛

No, they have a special “Wonder Woman” division for that. 😉

It’s not designed to save lives. It’s designed to get gun-phobic school boards to spend a lot of money on them. Simply brilliant!

It doesn’t have to be a good idea, it just has to pass the “liberal logic” test.

I was going to comment on that other post.
I was going to say THAT is the stupidest thing ever.
And then I get this proof that there’s always somebody stupider.

Is there a limit?

No. There’s no limit.

Nadine Schnettler, school board Chairwoman at Rocori School District, Minnesota has this to say, after spending $25,00.00 in a bunch of stupid board at $300.00 a pop:

“I don’t believe it’s a waste of money,” she says. “The chief showed us how to use it offensively — to block penetration of bullets through door windows, or to knock the gun out of the intruder’s hands.

No limit.
There’s no limit to stupidity.

And they are the ones running our schools!!!!!

I was also wondering if there is any footage of these having rifle caliber rounds fired at them? Because I have a feeling that it won’t do to well against 7.62×39 or say .308.

Liberal legislators and bureaucrats look at it this way: If there’s a way to look like they’re doing something, without giving ground on guns, and all it costs them is your money — that’s a big win.

They’ll probably wind up just giving teachers one of those guns with the barrel pointed back at the shooter:

America used one — twice — when it pulled the trigger on an Obama presidency.

You know, those bullets keep going after hitting the shield, probably pinging all over the room. So… the teacher gets the shield and the kids dodge richochets.

If it were me, though, I’d use the shield to ping all the incoming right back at the shooter, killing the bastard where he stands. I’d be a hero. Guest on Letterman and everything.

You could get the same results with my patented Kevlar ping-pong paddle.

Stop trying to horn in on my imaginary fame and hero status.

I want to meet the teacher that will stand their ground, holding the bullet-proof whiteboard while someone is blasting away at them with a .357!

Obviously physics and common sense are not the forte of school boards who buy this non-sense.

The manufacturer is not selling safety, they are selling false hope. Shame on them.

PS: just finished reading “The Law of Self-Defense”. Well done and thanks.

Of course the shooter won’t simply walk up to the whiteboard holder and shoot around it.

Silly shit like this reminds me of the young male clients in my agency’s DWI class component, most of whom think they’re nine foot tall and bulletproof. Worse, their thinking is just as problematic. In DWI class, they talk and share about how they’re going to handle it the next time an officer pulls them over after they’ve been drinking.

Our response to those knuckleheads also applies to Bloomberg and any school system dumb enough to deploy whiteboard kevlar shields: if your defenses do not even begin until the wolf is at your throat, you are screwed, already dead.

maybe some sort of hybrid would be useful though, door sized one on its own hinge that could be swung into place and deadbolted when there is a situation unfolding?
other than that the whole premise always seemed stupid to me

I was actually thinking about one just large enough to cover the windows in the door. You could use like 4 quick snap brackets to hold it in place, that might actually be effective.

I also note in their demonstration the shooters have very good marksmanship and hit the center of the whiteboard every time, they also have it very firmly bracketed in place. I bet most folks would drop the whiteboard after just one round hit it.

Schools with classrooms that have a outside wall would be well off putting a door in said wall.
Even if it is a alarm if opened door. School room doors open to hallways that seem to funnel victims to assailants.
Get the potential victims out of the building and away from the assailant.

Assuming the assailant is alone and inside….

Why don’t they just declare schools a “Gun Free Zone”?