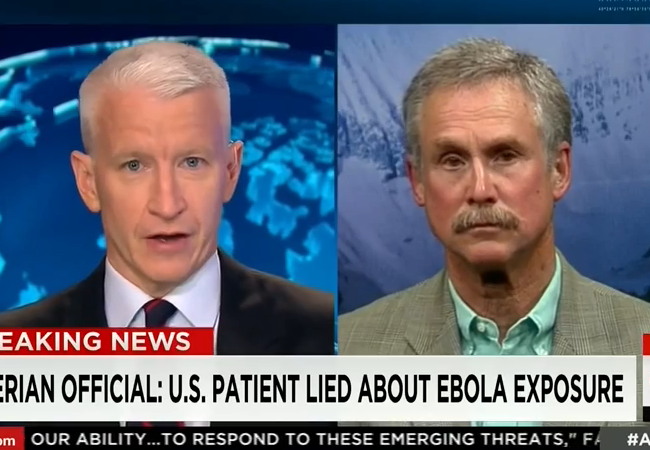 As Americans become increasingly concerned about the spread of Ebola in the United States, there is a growing call to cut off flights to and from Liberia.

Sen. Ted Cruz is asking the Federal Aviation Administration what it’s doing to prevent the spread of Ebola after the first U.S. diagnosis, which came in his home state.

“Given the severity of this virus and the fact that its spread to Texas has been associated with travel, it is imperative that the FAA take every available precaution in preventing additional cases from arriving in the United States. As you may be aware, several African nations have already restricted or banned air travel to countries with confirmed cases of the Ebola virus,” the Texas Republican wrote in a letter to FAA chief Michael P. Huerta. “British Airways, Emirates Airlines and Kenya Airways have also suspended flights due to the rising death toll and deteriorating public health situation in Ebola-stricken countries.”

One recent voice on CNN, an author named David Quammen believes doing such a thing would be wrong because of slavery. I kid you not.

Brendan Bordelon of National Review has the story:

CNN Guest: ‘How Dare We’ Cut Off Liberia Flights When ‘American Slavery’ Created That Country

An author on Anderson Cooper’s CNN program Thursday said the United States is uniquely obligated to maintain air links with the Ebola-ridden nation of Liberia, claiming it would be immoral to quarantine a nation created through “American slavery.”

Since the first U.S.-diagnosed case of Ebola cropped up earlier this week in Dallas, calls to ban flights from Ebola outbreak zones — particularly Liberia, where the patient contracted the virus – have exploded in American media.

But David Quammen, author of Ebola, believes the past sins of the United States require it to maintain travel links with the nation, despite the possible health consequences.

“We in America, how dare we turn our backs on Liberia, given the fact that this is a country that was founded in the 1820s, 1830s because of American slavery?” he told Cooper. “We have a responsibility to stay connected with them, and help them see this through.”

May God defend us all from the stupidity of political correctness.

What are those two pairs of men with two pairs of white suits doing behind the commentator and the guest??????

Oh and how nice of that commentator to totally negate in such a patronizing way (a classic form of elitist racism) the brave, proud achievement of free African-Americans!

Love the little sob he stifles at the horrifying suggestion that slavery that ended 150 years ago does NOT morally obligate the US to sacrifice its security and its citizens to ensure Liberia doesn’t feel isolated.

Kind of puts into perspective how much trust you want to place in his assertion that isolation of the infected countries or passengers is impossible, because hey, connecting flights.

That must be why we’ve given up trying to track terrorists. Connecting flights are magically untraceable teleportation devices that erase every at-risk passenger’s passport stamps, visas, customs documents, and airline records. Thanks, good to know, weepie PC man.

We don’t care about flights TO Liberia.

People on flights FROM Liberia and eventually entering the US should be quarantined for 21 days. That is how the disease can be prevented from spreading.

I’ld be willing to help pay for a one-way flight to Liberia for those two unknown, big tea-baggers.

Tea-baggers? No offense, but they strike me more as tea-baggees..

I’d like to see someone explain how banning passenger flights from Liberia equals banning flights to Liberia as well.

Because to my knowledge no one has, and all the talking heads involved including Jeh Johsnon head of DHS keep repeating it’s stupid to ban all travel to and from the country, answering a question not being asked.

If there’s a good reason, just say it already?

Every once in awhile, you see someone on the left tell us that Ted Cruz is stupid. He, of course, isn’t, as evidenced by his repeatedly being ahead of issues of the day. Things are going to get worse here before they get better, and a big part of it involves the failure of the progressive state to solve the types of problems that it should be addressing, and which are life-and-death issues for Americans. Flights from this part of Africa aren’t stopped because that would be racist. Never mind that Americans will likely die as a result. Maybe a lot of them.

So, Cruz is out front of this, and with every death, or near death, of an American, can say “I told you so”, that the Obama Administration and their progressive, politically correct, solutions endanger, and will ultimately kill Americans, whether it be here, with Ebola, or with ISIL, or engineering a breakdown on our southern border, etc. The Dems supporting these policies may continue to feel good about themselves, because their intentions were noble, even if their policies were forseeably doomed to failure. But Americans will still be dead as a result.

Cruz, however, is way too dignified to stand on a dead ebola victim to say I told you so. If he needed to refer to his previous comments, he’d say something like “people previously spoke of this danger.”

On the other hand, West Africans with relatives in the US who think they might be infected will come here, stay with family members and put them and their neighborhoods and schools at primary risk of catching the disease..

Which race card trumps which?

so we are supposed to support the people who captured their own people and sold them to slave traders?

This is SO funny. Guess neither of these gentleman ever bothered to read “Mississippi in Africa” by Alan Huffman, to get the story of the Isaac Ross will and the struggle to get freed slaves back to Africa. Ironically, the first thing those former slaves did was to build big houses and buy some slaves of their own! The African Krus who already lived there referred to the newcomers as “whites”. Someone needs to do some research!

Liberia was founded by FREED SLAVES!

Slavery was a global phenomenon, and we were pioneers in ending it.

I’m so sick of this never-ending shame-fest directed at the nation that put a stop to slavery.

Are we sure that wasn’t Crazy Nancy Pelosi in a gray with and fake moustache? She’s usually the one they trot out to say something that stupid.

Everything’s theory and philosophy with these clowns, they are ignorant of the empirical, the practical, and the real. Besides, when you’re trying to justify an completely unjustifiable decision not to restrict flights from countries experiencing an Ebola epidemic, you’ve got to throw everything out there, every crackpot idea any available lettered airhead has to offer, in the hopes that something, anything might stick.

When presidents take the oath of office, the number one agreement is to uphold the constitution and in doing so protect and secure our national borders from outside threats. We can see that Obama is applying to this health crisis his same principles of that oath with the same regard as he is known to do for everything we have experienced to date.

I read that Saudi Arabia has banned people from the African countries impacted by this Ebola outbreak from traveling to their kingdom for the annual hajj pilgrimage.

Given that Muslims are highly active in human slavery TODAY, and have been “global leaders” in slavery throughout recorded history, how will the prog drones deal with the cognitive dissonance?

They have to contort themselves into mental pretzels to deal with their Politically Correct bullshit.