Probably a hoax, but enough to cause panic. 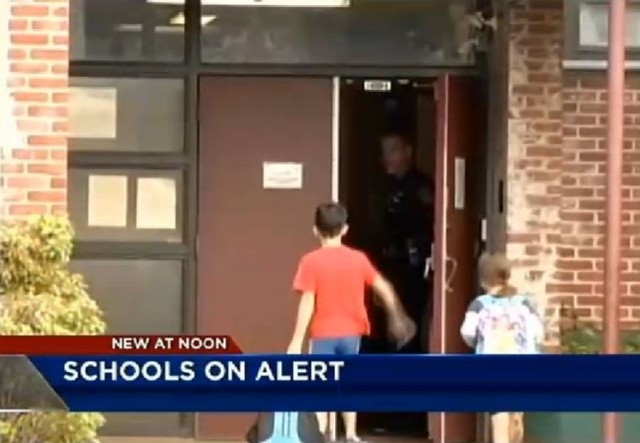 After the Oklahoma workplace beheading, I asked if the threat level had shifted From Going Postal to Going ISIS.

Regardless of whether we see more actual beheadings in the U.S., it appears that threats of beheadings may be the latest iteration of threatening hoaxes based on news events.

As ISIS beheadings are in the news, as well as the Oklahoma workplace beheading, someone who hopefully will be caught made a beheading threat directed at elementary schools in three towns in my formerly home State of Rhode Island and Providence Plantations. (h/t Infidel Bloggers Alliance)

Police had a very visible presence Wednesday at schools in Cranston, Johnston and Warwick.

Officers will be present all day after a letter threatening beheadings at the elementary schools in the three communities was received by the Johnston Police Department on Tuesday. Police said the handwritten letter was one page, and it is being analyzed at the state crime lab at the University of Rhode Island.

Police departments said they would cover every school in the three communities.

“When these threats come in, we take them very serious. But at the same time, we don’t want these threats to disrupt our daily life, including important work that they do here educating students,” Cranston Police Col. Michael Winquist said.

The police presence calmed the fears of some parents.

“I noticed that they have extra police presence here, so I thought it would be safe for them to go to school today. You know I monitor, I’m here. I walk my daughter to school every day,” said Giovanni Carpenter, of Cranston.

But schools felt the effects. Absentee levels in Johnston and Cranston were more than 30 percent as parents exercised an abundance of caution.

“We will convey our deep appreciation for the Islamic faith, which has done so much over the centuries to shape the world[*] — including in my own country.”

* Including for example the complete elimination of Jewish, Christian, and Hindu/Buddhist/other populations from Muslim countries, the rearranging of Lower Manhattan’s skyline and streets, and the inconveniencing of the entire population of the flying public as they attempt to board airplanes.

The police are at these schools? Weren’t we lectured after Sandy Hook that good guys with guns aren’t the appropriate protection for school children?

Homeschooling will be the future. These public juvenile detention centers are past their usefulness.

” parents exercised an abundance of caution”. No, they didn’t. They responded to an obvious hoax by acting as cowards. Nice lesson to teach your kids.

Sure, given the recent beheading and threatened beheading in OK this was CLEARLY and OBVIOUS hoax. And any parent who is afraid of his/her child being murdered in a heinous fashion is an obvious coward.

“No, they didn’t. They responded to an obvious hoax by acting as cowards.”

You’re a flippin idiot. Any parent worth a damn protects their children. I will be happy to deal with the muslim beheaders, but I won’t send my children to a threatened area to prove how brave I am.

Ah yes, bob_in_ri, calling parents who’d rather not risk it being a real threat (and not a hoax) cowards. I mean, Muslims in ISIS aren’t doing exactly what’s being threatened in this letter anywhere,right? And Muslims would NEVER attack a school…oh wait, I forgot about Beslan.

This is one type of threat that does not worry Debbie Wasserman Schultz.

It is entirely appropriate to take this kind of threat seriously, and then come down hard on anybody that commits a hoax.

When I was in high school, bomb threats were all the rage. People would phone one in, just to get out of taking a test. Now, there are many ways to deliver a threat, but those threats are fairly easily traced.

Besides, ISIS has already given us the Islamist warning. They do not need to warn us again.

If I were a RI parent, I’d probably keep the kids home for a day or two until they trace this letter-writer. And when they find him, as Glen Reynolds likes to say, tar, feathers. Unless, of course, it turns out to be an actual jihadi.

Between the Muslim crazies, that pathetic excuse of a pResident we are stuck with, and all the rabidly fascist liberals running amok in society, I feel like Alice in Wonderland after having fallen down the rabbit hole. Everything is bass-ackwards from normalcy and sanity ~

This being RI and all, I imagine the state legislators will rush out and pass a bill making all public schools “No Knife” and “No Sword” Zones!

There! That’ll fix it!

And public schools in RI are among thoses place where a Pop Tart chewed into the vague shape of a pistol is enough to cause panic.