Finding inconsistencies where none exist. 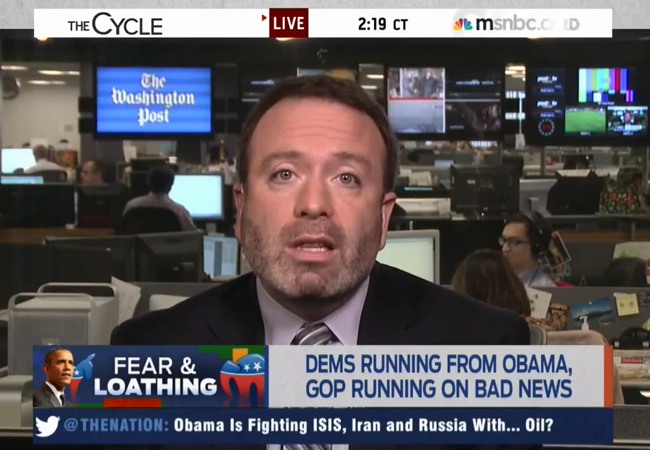 In a recent appearance on MSNBC, the Washington Post’s Dana Milbank suggested an inconsistency between Republican desires to remove Obama from office, and Republican complaints that the Secret Service was not adequately protecting Obama from harm.

Why is that inconsistent? Can’t we both oppose a president and want to protect the President? The Presidency is greater than the man or his policies.

Milbank: Why would GOP want Secret Service to protect Obama?

Among the fears Milbank suggests the GOP is aggravating for political gain are concerns that the Secret Service is underperforming.

First, what a shocking and offensive insinuation to make. Yes, Republicans (and Democrats, I’d venture) can oppose a president of the opposite party and also not want any harm to come to them. Second, the suggestion that voicing concerns about the increasingly apparent incompetence in the Secret Service amounts to fear mongering is just as insulting.

Of course, this could be a classic case of media projection.

Does Dana Milbank remember the Bush assassination fantasy film “Death of a President”?

Kevin Sullivan of the Washington Post wrote this in 2006:

Nearly every British newspaper on Friday carried photos of the “assassination” of President Bush — or, rather, the eerily realistic depiction of it from a new documentary-style television film that is causing an uproar in Britain.

The film, “Death of a President,” has been alternatively derided as a tasteless publicity grab and defended as a serious look at a plausible event that could have dramatic ramifications for the world.

“It’s a disturbing film,” said Peter Dale, head of More4, the television channel that will telecast the film in England in October. It is scheduled to debut this month — on the eve of the fifth anniversary of the 9/11 attacks — at the Toronto Film Festival.

“It raises questions about the effects of American foreign policy and particularly the war on terror,” said Dale, who denied criticism that the film made an anti-Bush or anti-American political statement. “It’s a fairly attention-grabbing premise, but behind that is a serious and thought-provoking film.”

And don’t get me started about assassination fantasies about a President.

It’s not as if the US Secret Service is the Praetorian Guard…..

Oh wait. I guess Mr. Mattera has something to say about that.

Do you imagine Leon Panetta jumping the fence?

I earnestly sought to find ONE thing that BIG GOVERNMENT has done well:

Economically produce a working website with years of lead time?

NOT lie to us about every stinking thing?

NOT piss on the 1st, 4th and 10th Amendments in various ways?

Enforce the laws passed by Congress?

Just recognize and deal with reality?

Do ANYTHING that was not calculated to stifle business formation and expansion (unless you are an Obama crony)?

Simply do the job you are being paid to do, and NOT politicize it?

Knit the nation and its people into a cohesive union that respects each other?

Maintain our friendships with other nations, and keep our enemies fearful?

NOT kill our veterans while pretending to “support our troops”?

None of those occurred during the reign of Tyrant Obama the Liar.

Most all of those things were actually done by small government.

We could name dam building, bridge building, the Panama Canal, etc., as well. All were or could be within the ambit of small government. All, ironically, things we cannot do now. Now we break dams for fishies.

Hell, we can’t even ALLOW a pipeline to be built.

As Mark Steyn has noted, as government gets bigger, it gets stupider.

Can I appropriate this for a grassroots Get Out The Vote message? It’s great.

Dana Milbank is either stupid or corrupt. Or both. And he has the look of someone who doesn’t trust his own mirror. All those years of lying to himself now show in his eyes.

A simple reason the Right doesn’t want Obama assasinated – JFK. Kennedy’s administration was a complete failure, but his assasination washed all that away by making him a martyr.

Its the Left that wishes Obama was killed in office. Then they could stop pretzeling themselves trying to defend his incompetence and instead lament about how “the right wing murdered Camelot”

Milbank has disgraced himself by even asking the question. Shame on him for being a disloyal American. A loyal American would understand exactly why Republicans want the President of the United States protected. Disagreement with a President’s policies is not the same as desiring his murder.

I don’t want BO dead, I just want him not President.

In prison with a death penalty for treason would work for me.

I’d actually prefer a life sentence with no possibility of golf.

Interesting take on the issue, tarheelkate, but I’m not sure it really applies here. One would hope that certain Dem expressions of wished-for fates for GWB were more rhetorical than revelatory.

The WaPo itself says that Millbank “…writes about political theater in the nation’s capital…” and it would seem that he is not above making himself a character on that stage.

Strange that a supposedly well-educated person (Yale grad) would throw the kind of verbal firebomb he did on this occasion. At the very least, he seems to be referencing the old disinformational Soviet line on the murder of JFK – that it was a CIA/right wing conspiracy and not a cancelled KGB black bag op which went way south when Oswald went rogue and decide to do the deed anyway. Unfortunately for us, the slander stuck in the inky deep recesses of the American psyche and it would seem that Millbank is not above taking advantage of that however obliquely he may have referenced it.

This time, of course, there is the added element of race in the equation. Why would he do such a thing in a volatile socio-political climate such as the one we have today? Who knows? According to Wikipedia, he was a member of the Skull and Bones at Yale. Hmmm…

Democrats hate Republicans and see them as evil. That is how the justify their lies and ends justify the means politics. As according to them we are evil we obvious want Tyrant Obama the Liar murdered.

Of course, because we would all feel sooo much safer with Biden in charge.

This is so bizarre to me, too. I don’t agree with Obama on anything and wish he hadn’t been re-elected (or elected the first time), but how does that mean that I want to see him killed? That’s a huge huge leap that makes no sense . . . to anyone but leftists.

Leftists take great joy in wishing painful death upon anyone with whom they disagree–not just President Bush but everyone from Dick Cheney and Sarah Palin to the Duck Dynasty family. I guess they just can’t imagine disagreeing with someone’s policies or worldview and not wanting them to die. That’s a sad revelation, of course, but it reflects on them, not us.

Of course we want the SS to protect the POTUS! All this country needs is that jackass becoming a martyr.