Because Only The Far Right Incites Violence

Because Only The Far Right Incites Violence 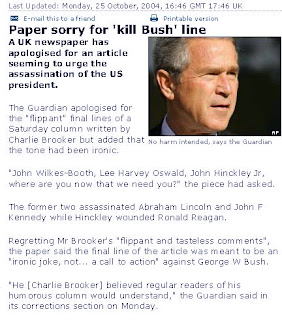 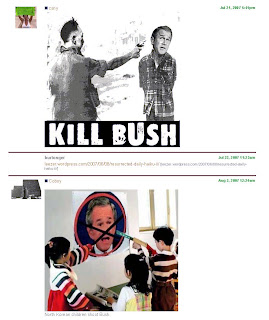 As far as liberals are concerned, the difference is that Bush deserved it. When conservatives are attacked or assaulted, it proves how horrible they are for inciting normally peace-loving people to attack them. When liberals are attacked or assaulted, it shows how horrible conservatives are for inciting people to attack them. See?

Well, there is another hypocrisy here. The liberals are calling him terrorists, but there is no hand-wringing, no discussions of “why they hate us.” No attempt to reach out and address the legitimate concerns that led us to this point, as they would typically say if al qaeda killed a person. and certainly obama is not about to make an apology tour.

Which is the right answer. we should do the right thing because it is the right thing only, and besides often these kinds of idiots have unreasonable demands. Tim McVeigh wanted white christians to take over the country and nuke isreal. osama bin laden wants islam to take over america, for women to be sent back to the home in a veil, for gay people to be murdered, for criticism of islam to be outlawed, and at the very least for anyone who is not a muslim to pay a fine to the state. Oh, and to nuke isreal. hey, wait, i just realized: mcveigh and bin laden agreed on something! the fact is vigilantes and terrorists are poor judges of right and wrong.

(not really just highlighting another hypocrisy)

Regardless of which side puts forth the propaganda that demonizes the opposing side, the profitable exercise succeeds because it relies upon the vast zombie-wing condition of the nation.

The typical member of the zombie-wing has no real 'news & information' cognizance and thus, like some barnacle, must firmly attach him or herself to whatever political and informational vehicle is at hand – including family, social peer group and cultural environment.

Most people do not invest any time or interest in discerning the nature of their moral or political belief system. If the Reformed Lutheran Church tells them that late-term abortion is okay, then it simply is. If the Church tells them that God hates homosexuality, then gays are bad. If a media outlet proclaims so-and-so a racist, then he is. If one political party declares the other ‘evil,’ then it’s so.

The zombie nation watches sports; it doesn’t comprehend political viewpoints unless there is a feel good angle. A moral zombie doesn’t know right from wrong or up from down.

Hate Bush. Dems are Socialist. Conservatives are racists. Liberals are weak. America is to blame.

These things would all have gotten more attention is someone had, you know, killed Bush.

Pleasantly surprised to see a Cornell prof take a reasonable stand. Didn't know Ithaca had any 'non-progressive leftists'. Glad they do!!!

I'd never seen such incredible animosity against a President until Bush…. coming from a lot of academics who believed that wearing T-shirts that insulted the President was simply OK because 'surely" everyone else agreed.

I am certainly not a 'follower' of Obama, but criticizing his policies and socilist agenda is not the same as personally attacking him…

Demonization like this reduces us all. I disagreed with Bush. I didn't hate him. (But to be fair, I also didn't speak up often enough when people on the left did these kinda things, just like not enough people on the right speak up now.) It is a partisan world, at least here on the internet. (I'm of the opinion that most Americans believe partisan bloggers & protesters right and left are nutcases who ought to get a life, in the first place, and that things like this only further cement that nutcase part).

Like the rumors folks are spreading about the Palin & Obama families, (& others, of course) it's lowest common denominator stuff that is more about hurting people personally than it is about issue advocacy.

Anyone who supports these pix while disparaging those (or vise versa) is a hypocrite. Wrong is wrong, period.

There is little doubt that certain people who identify with the repuiblic party have said and done things that are repugnant or childish. The problem it that the progressive left seems comfotable embracing repugnant and childish behavior directed at Republicans. Vanity Fairs portrayal of Bush as the Joker. The Atlantic's doctored photos of John MCCain and the hatchet job of Sarah Palin by Us Magazine readily come to mind.

Rudeness and bad manners seem to run through the core of the progressive Democrats while mainstream Republicans appear better mannered.