And NY Mag blames Perdue even after the truth is revealed. 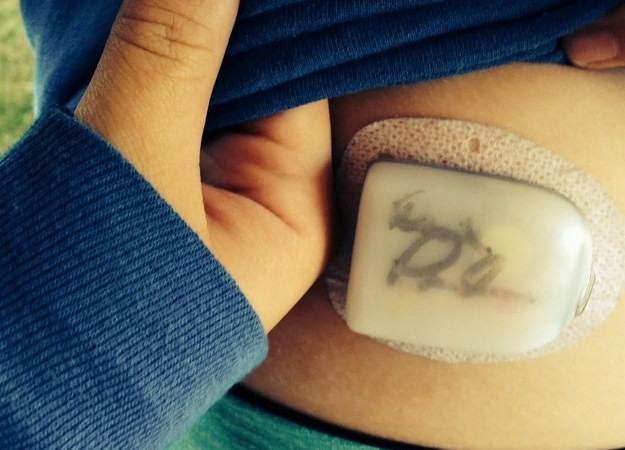 David Brock is the founder of Media Matters for America, who’s goal was to destroy Fox News and Rush Limbaugh by any means necessary.

Brock also is the person behind American Bridge, the entity formed to hire trackers to follow Republicans.

One tracker caught David Perdue, the Republican candidate for Senate in George, at a rally, and posted a video purporting to show Perdue signing his name on a woman’s hip. The video was spread far and wide including at mainstream media publications such as The Washington Post as Perdue signing the woman’s body.

But, as Buzzfeed reports, which originally reported it as “David Perdue Signs Woman” (based on the url), the video was misleading, CORRECTED: Dems Miss Insulin Pump In Video Of Perdue Signing Young Woman (large print in original):

David Perdue, the Republican nominee for Senate in Georgia, appeared to sign a young woman’s torso at a campaign rally on Thursday in a video distributed by a Democratic opposition research group — but further video showed that the footage was misleading.
“No pictures on this,” Perdue joked before autographing something on the hip of a young woman, while campaign staffers tried to block the scene from being filmed.
The footage was captured by a Democratic tracker with the firm American Bridge at a Perdue campaign rally in Jonesboro, Georgia.

Correction: The American Bridge tracker footage did not capture the whole scene, according to the Perdue campaign.

“David was asked to sign an individual’s diabetic pump to help raise awareness for juvenile diabetes,” said Megan Whittemore, a Perdue spokesperson. “This was a Georgia family who shared their personal story of their struggle with ObamaCare and the rising health care costs associated with their daughter’s treatment which is not being covered by their insurance.”

Another angle on the video, not captured by Republicans or Perdue allies, appears to show the young woman is holding something on her body for Perdue to sign.

The pump is featured in the enhanced image from the Perdue campaign, via the Buzzfeed post.

It appears the original video has been taken down, but here’s the other angle referred to by Buzzfeed:

So David Perdue signs a woman’s insulin pump at her request to highlight diabetes health problems, and American Bridge turns it into a sexual situation.

Nor am I shocked that NY Magazine blamed Perdue for the incident: 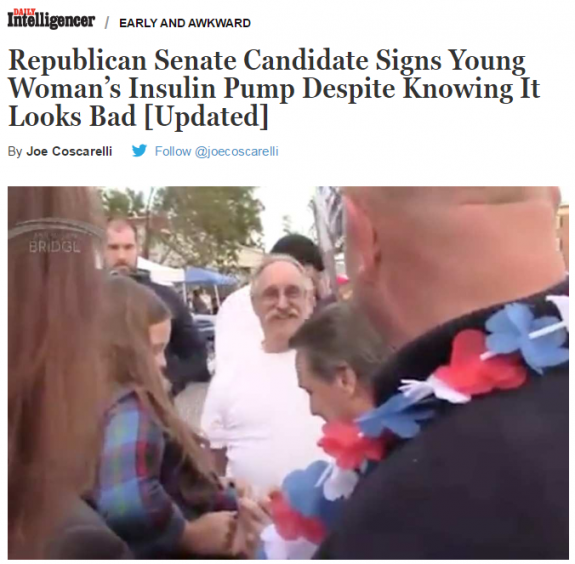 heh heh heh, turned it right around and made it about BoboCare. Beautiful. It seems like the Dims are walking into it at every turn this time around.

We really are two countries with two separate and opposing peoples, differing in values, ethics, goals and vision.

Perhaps it is time to consider a divorce while it could still be a peaceful divorce.

We tried that once, and the Federal government made a big damn deal about it.

Maybe we need to make a choice when we’re oh, say 21, and then have one chance to reconsider at 30.

Have two sets of laws and two parallel governments. Eventually, one or the other would die of natural causes, and we’d all be one homogenous people.

“You can choose a low-freedom, low-opportunity, low-risk, low-reward life, with cradle-to-grave security and not much else.”

AND you pay taxes to support that.

See, there’s the problem; you can’t have a system like that because the other side won’t leave you alone. YOU have to be dragooned into supporting THEIR lifestyle and life choices.

Rags, you’re getting too cynical. Don’t you believe in the better angels of their natures? Or is it the better natures of their angels?

Oh well, I tried. Carry on with your cynicism.

I was canvassing on Saturday, October 25th for David Perdue in my precinct, and he had the identical complaint: his daughter had developed diabetes last year, and none of the care was covered by their medical insurance.

I didn’t know this was such a common condition for young, thin people.

Bad writing: “and I met a voter who had the idential complaint”