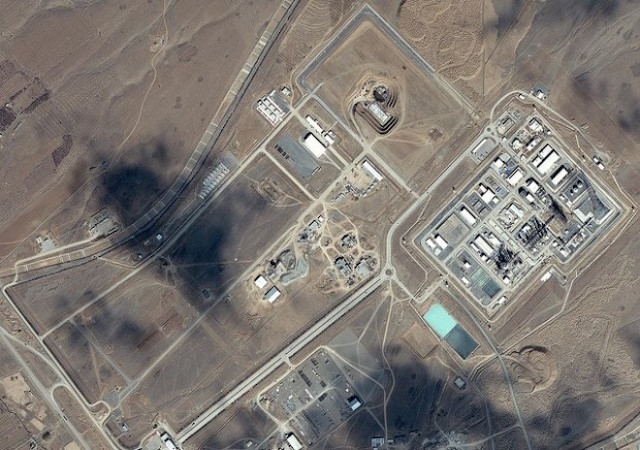 Remember when President Barack Obama said that the United States will “always have Israel’s back” when it comes to Israel’s security—especially in regards to Iran’s nuclear program?

Or when Secretary of State John Kerry said that with Iran “no deal was better than a bad deal?”

The administration’s aim is to make a deal with Iran even as Israeli Prime Minister Benjamin Netanyahu warns that the emerging deal “is a threat to the entire world, and, first and foremost, this is a threat to us.”

Kerry’s negotiation team continues to operate from a premise that “any deal is better than no deal.”

The Los Angeles Times is now reporting that the administration has sweetened its deal to allow Iran 4000 operational centrifuges.

The Obama administration has sweetened its offer to Iran in ongoing nuclear negotiations, saying it might accept Tehran operating 4,000 centrifuges, up from the previous 1,300, according to a semiofficial Iranian news agency.

The Mehr news agency also said Monday that Iran and the six world powers seeking to negotiate a nuclear deal remained divided over how much uranium-enrichment capacity the Middle East nation should be allowed to maintain, and how to lift punitive sanctions from its economy.

Ray Tayekh, a critic of the current negotiations, observed that “the U.S. sweetener may encourage Iran to drag out negotiations to see what better offer it might receive after a few more months of talks.”

If LA Times report is true, there are a number of factors that still aren’t clear. Iran currently has 19,000 installed centrifuges (though not all of them are operating.) Does this higher number mean that the remaining centrifuges would be dismantled or simply unplugged? (If the latter is true even The Washington Post, which twice endorsed Obama for president, warned that this “would cede Iran the option of racing to build a nuclear arsenal at a time of its choosing, while removing the sanctions that are pressing the regime.”)

News reports about the nuclear negotiations only seem to go in direction: the United States in retreat.

The LA Times report follows a report in The New York Times that the Obama administration is seeking to bypass Congress regarding any deal it makes with Iran.

White House officials say Congress should not be surprised by this plan. They point to testimony earlier this year when top negotiators argued that the best way to assure that Iran complies with its obligations is a step-by-step suspension of sanctions — with the implicit understanding that the president could turn them back on as fast as he turned them off. …

But it is clear that along with the fate of Iran’s biggest nuclear sites — Natanz and Fordow, where uranium fuel is enriched, and a heavy-water reactor at Arak that many fear will be able to produce weapons-grade plutonium — the negotiations have focused intently on how sanctions would be suspended. To the Americans, the sanctions are their greatest leverage. For many ordinary Iranians, they are what this negotiation is all about: a chance to boost the economy, reconnect with the world and end Iran’s status as a pariah state.

These paragraphs show exactly what’s wrong with the administration’s approach to the nuclear negotiations. The administration is focused on how to reduce sanctions on Iran while Iran is focused on how to keep its enrichment infrastructure in place. This might be reasonable if Iran was reasonable and trustworthy but as an American intelligence official observes at the end of the NY Times article, “over the past 10 years, we’ve uncovered three covert programs in Iran, and there’s no reason to think there’s not a fourth out there.”

In her post on the NY Times article yesterday Amy Miller concluded, “This isn’t politics; it’s life and death. But you can be certain that whatever decision Obama makes, it will be motivated by his desire to please all the wrong people.”

How true. How unfortunate. How dangerous.

Obama would dress in a Burka to get this deal done. Look for him to give away the entire store and a promise for next year’s receipts as well.

This administration sure is doing a lot to preserve and protect Iran and Iranian interests.

I think Zero is a closet Muslim. Seriously. He sure hasn’t done anything to contradict that image, and in fact has gone out of his way to be more than sympathetic to Muslims.

4 words nobody seems to ever remember.

No. She is not Iranian. She does have some links to Iran, like being born there.

But she is not Iranian. Everyone should do research.

correct
http://en.wikipedia.org/wiki/Iranian_nationality_law
however she is pro iran and always has been.

She’s also a bunch of other very bad things, and a positive danger to the Republic.

But it’s important to keep it real, is all I’m saying…

yup.
odd how we got downvoted huh?

Splitting hairs doesn’t solve anything at this point.

Confining what we say to the truth is always a good policy.

You just look stupid when your publish stuff that isn’t true.

Up to you, though…

You’re absolutely right about integrity and choosing whether or not to appear stupid:

“The American and Iranian delegations began their meetings in Doha, Qatar October 1st, according to Khalili’s source. “The Iranian side was headed by Ali Akbar Velayati, the former Iranian foreign minister and a close adviser to the supreme leader Khamenei.

Khalili’s source identified Valerie Jarrett, a senior Obama adviser, as the head of the U.S. effort to engage Iran. Jarrett was born in Shiraz, Iran in 1956. “With her roots in Iran and her family ties, the source believes she is leading the efforts. However, we are attempting to verify this on this side,” he notes.

Jarrett’s family has known the Velayati family since their stay in Iran in the 1950s, Khalili’s source maintains. Jarrett’s father worked at the Namazi hospital in Shiraz, owned by an Iranian family that has been influential with the regime after the Islamic Revolution.

“Surrogates of the Iranian regime have infiltrated Washington D.C.for a long time,” Khalili observes. “They have approached each administration with the hope of delaying any sanctions, removing sanctions in place, avoiding a war, protecting the Islamic regime, and promoting the false hope that negotiations can be achieved.”

NONE of which you said.

You didn’t know it (I bet) until you were challenged on what UNTRUE crap you DID say.

As I said, research is always good.

She isn’t Iranian, although she was born there and has never said an ill word about the mad mullahs.

Mainly, though, she’s a crook from Chicago.

She’s also a slum lord that makes the BAD Scrooge look like a saint.

There may be an example, but I cannot think of a time in American history when we have followed a policy of such peril so inexplicably.

Everything this President does is intended to bring our country (and Israel) to its knees.

Either way the US is major trouble in the realm of international politics, and Obama seems intent on continuing to live in his dream world where Iran is merely misunderstood and where Israel is the root of all the Mid-East’s problems.

I wrote a post almost a year ago titled “Iran Gets The Gold Mine, Israel Gets The Shaft” discussing how the deal in negotiations then was merely to buy the Iranians time.

Back then, I said:

Further, the deal explicitly lays the groundwork for recognizing a future Iranian “mutually defined enrichment programme with mutually agreed parameters consistent with practical-needs, with agreed limits on scope and level of enrichment activities, capacity, where it is carried out, and stocks of enriched uranium for a period to be agreed upon.” Notice that last little bit: not permanently, but for an agreed period of time.

Well, now we know that President Obama is only interested in appeasement. Perhaps we should all refer to him as “Barack ‘Neville Chamberlain’ Obama” from now on. Unfortunately Obama does not have Chamberlain’s military rearmament to lean on to attempt to save any shred of his reputation should hostilities erupt.

Further, I wrote then :If the Israeli’s get any indication that Iran has finished a nuclear weapon, expect a short, brutal and very effective attack by Israel upon Iran which will take out a significant swath of the Iran’s military assets. Let us hope that Israel has the stomach for such an action. The cowardice of Obama Administration officials, from President Obama and Sec. Kerry on down has show that the current US administration does not.

Winston Churchill’s quote comes to mind, paraphrased for the current situation: These United States have been offered a choice between war and shame. President Obama has chosen shame, and we will get war.

BO and the Iranians play for the same team, the anti-US team, the anti-Israel team. The course of these “negotiations” shouldn’t be a surprise to anyone.

The UN Security Council Resolutions – which Russia and China allowed to pass, and are according to all Democrats’ traditions more controlling than the Ten Commandments or the Hammurabi Code – call for ZERO centrifuges and NO enrichment.

Were they repealed? No.

Was the US/EU/NATO authorized to negotiate them away? No.

Could any deal allowing ANY enrichment be ratified by Congress? No.

So, where exactly does Obama get the authority to negotiate anything on Iranian nukes?

From His OWN Imperial Highness.