Paul Krugman: Obama one of most successful presidents ever

Paul Krugman: Obama one of most successful presidents ever

If bigger, more intrusive government and a lowering of U.S. status in the world is the test, then Obama is wildly successful 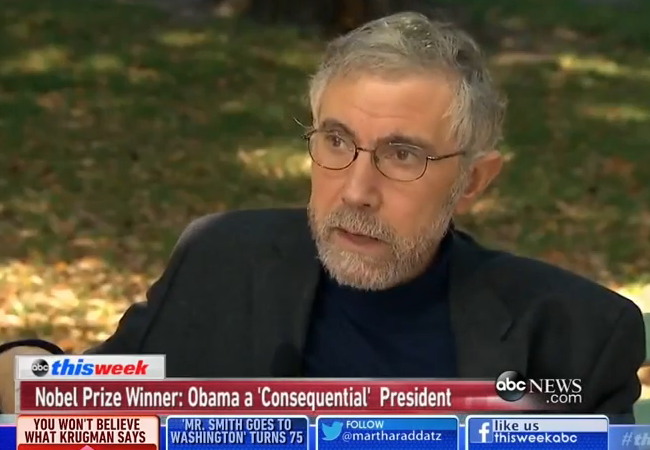 This is a fascinating glimpse into the progressive mind.

Paul Krugman was interviewed on ABC’s This Week and just couldn’t say enough about what a great president Obama has been.

Ryan Lovelace of National Review has the story:

Krugman: Obama One of the Most Successful Presidents in American History

On ABC’s This Week, New York Times columnist Paul Krugman said President Obama is one of the most consequential presidents in modern American history, ranking third behind Presidents Franklin Delano Roosevelt and Lyndon Baines Johnson. Krugman explained his reasoning by saying that Obama has made important changes to the economy, implemented new environmental policies, and accomplished health-care reform. And on foreign policy, Krugman said, “He hasn’t done anything really stupid and that is a big improvement over his predecessor.” Krugman wrote an article for Rolling Stone magazine noting how his perception of the president has changed, and why he now believes Obama to be one of the “most successful presidents in American history.”

In Defense of Obama

When it comes to Barack Obama, I’ve always been out of sync. Back in 2008, when many liberals were wildly enthusiastic about his candidacy and his press was strongly favorable, I was skeptical. I worried that he was naive, that his talk about transcending the political divide was a dangerous illusion given the unyielding extremism of the modern American right. Furthermore, it seemed clear to me that, far from being the transformational figure his supporters imagined, he was rather conventional-minded: Even before taking office, he showed signs of paying far too much attention to what some of us would later take to calling Very Serious People, people who regarded cutting budget deficits and a willingness to slash Social Security as the very essence of political virtue.

And I wasn’t wrong. Obama was indeed naive: He faced scorched-earth Republican opposition from Day One, and it took him years to start dealing with that opposition realistically. Furthermore, he came perilously close to doing terrible things to the U.S. safety net in pursuit of a budget Grand Bargain; we were saved from significant cuts to Social Security and a rise in the Medicare age only by Republican greed, the GOP’s unwillingness to make even token concessions.

But now the shoe is on the other foot: Obama faces trash talk left, right and center – literally – and doesn’t deserve it. Despite bitter opposition, despite having come close to self-inflicted disaster, Obama has emerged as one of the most consequential and, yes, successful presidents in American history.

I agree with Krugman that Obama has been a consequential president but not in a good way.

PC be damned: Paul Krugman is an idiot.

No he’s a Socialist. Wait, ok, yea they are the same thing.

Krugman is the quintissential elitist, progressive intellectual. He achieved notariety in one narrow field of expertise and now the prog drone army kneels at his feet to slurp down whatever he spews in their direction, on any topic now matter how distant the topic from his supposed expertise. If the guy had to actually produce something for a living other than echoing stupid, disproven Marxist bullshit, he would starve to death.

Krugman’s next column will explain why Satan worshipping really is a good thing, and how catching the Ebola virus is something we should all be trying hard to do.

I didn’t know there was a Nobel prize for sarcasm.

I asked a teacher in High School if there was a Nobel Peace Prize why wasn’t there a Nobel War Prize.

I have found inverting anything he says is sound practice if you want to deal with reality.

This makes me recall something Ben Shapiro said on his radio show. Liberals qualify success by passing legislature. What they do does not actually have to accomplish the intended consequence. So by that measure of success Krugman is right. Things like Obamacare may waste trillions for a tiny increase in enrollment, but the President still gets his award for trying. The A is for effort not accomplishment.

History is replete with supporters of the the most terrible of tyrants. Witness Lenin, Stalin, Mao and Hitler in the 20th century and not counting the petty dictators. Considering the millions who died believing in these men, is it any wonder that this carries over to the 21st century. “Pathologic” doesn’t seem to completely wrap up the package. The Nobel prize isn’t all encompassing. Maybe in terms of enduring damage the Prez is at the top of the list.

what has Krugman been smoking? It sure is not tobacco.

Paul Krugman said President Obama is one of the most consequential presidents in modern American history …..

Well, there’s no argument from me on that point.

I am surprised that Keynesian Krugman wasn’t awarded a Nobel Prize for literary fiction instead of economics.

The Community Reinvestment Act (CRA) empowered federal regulators to pressure banks to make loans to low-income people with the help of Bush’s American Dream Down payment Initiative (ADDI). And,…

In October 2001, Krugman said, “economic policy should encourage other spending to offset the temporary slump in business investment. Low interest rates, which promote spending on housing and other durable goods, are the main answer.”

After months of calling for inflation of housing prices, Krugman in 2002 came right out and said the fed needed to create a housing bubble. Since 2007, Krugman has repeatedly and angrily denied that what he was saying, so let me run his comments in their full context:…

“To fight recession the FED needs to do more than a snapback; it needs soaring household spending to offset moribund business investment, And to do that, as Paul McCulley of Pimco put it, Alan Greenspan needs to create a housing bubble to replace the Nasdaq bubble.” Paul Krugman, “Dubya’s Double-Dip, “The New York Times, August 2, 2002 (from Peter Schiff’s The Real Crash)

And that’s just what he did do.

The rest, as we say, is history. Very bad, terrible, awful history.

Krugman is part of the Obama faction, which is struggling to retain control of the Democrat Party and America.

If you equate success with destruction by progressive policy then Obama is indeed a smashing success.

Krugman is like the Nobel Peace Prize committee, awarding praise before there is anything worthy of praise.

A newspaper which used to have columns by William Safire and A.M. Rosenthal now has Paul Krugman. Depressing.

with people like Krugman writing columns, how on EARTH does the Times stay afloat?

I notice that Krugman has that same paranoid schizophrenic look in his eyes that David Brock does.
Obama wasn’t voted the worst president since WW II for nothing.

To paraphrase what some internet wag wrote earlier today:

Krugman entered the Augean Stables and has emerged, triumphantly, covered in horseshit.

Most of 0bama’s Left Wing acolytes are in a unique (physical) position to tell us whether Teh Chosen Won’s effluence or feces actually smells.

There is a fine line between being wildly partisan in your arguments and simply losing all touch with reality. This is just more evidence that Krugman passed that line a long time ago.

He didn’t lose touch with reality – he never had it. Krugman is the quintessential ‘useful idiot’ – an academic with impressive credentials who believes the progressive/lib agenda down to his soul and has no clue when he’s being used because they keep telling him he’s a hero of the mmovement and his ego eats it up like a bass on a lizard. Liberal media and liberal politicians naturally made him a ‘go-to authority’. Even his Nobel was politicized.