Has the President lost his luster? 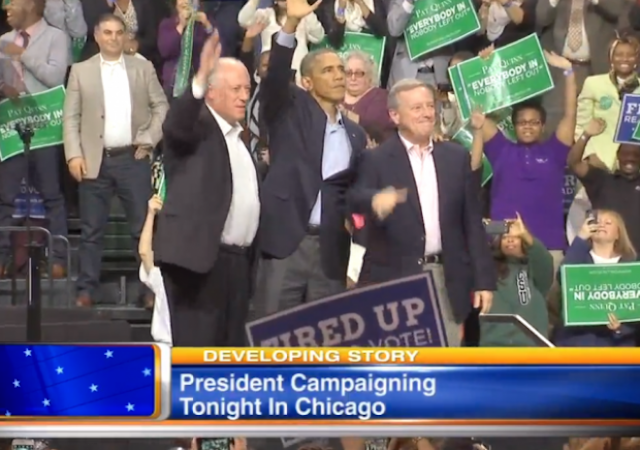 As Rebel Pundit pointed out:

Thomas did his best to paint the president’s visit as a success, “When it comes to Chicago, especially on the South Side, Obama has not lost his political magic. Sunday night at the Jones Convocation Center, it was filled to near-capacity.”

Thomas reported 6,000 attendees at the rally to re-elect Quinn, but the capacity at the center is 7000.

Interestingly, the President is having difficulty filling seats on his home turf. Earlier this week, attendees at a Maryland rally walked out when Obama took the stage; and last month, the Climate Summit held in New York City was missing some pretty crucial world leaders, yet another indicator of Hope and Change’s waning star power.

Meanwhile, Democrats across the board worry about being seen too close to the President for fear he’s hurting their re-election chances.

Standing aside and taking one for the team certainly isn’t Obama’s style, which is probably why he’s become the single largest October surprise. Earlier this month, Mr. Obama made it painfully clear that, “his policies were on the ballot,” a quote that’s found its way into more than one campaign ad.

Then, in an interview with MSNBC’s Al Sharpton, Obama said (talking about Democrats currently on the ballot), “these are folks who vote with me, they have supported my agenda in Congress… these are folks who are strong allies and supporters of me.” And yet another unforced error was made.

Not exactly what Democrats like Kentucky Senate hopeful, Alison Grimes, want to hear. Particularly after working incredibly hard to ensure voters that, “this election isn’t about the president,” while vigilantly avoiding any association with him.

A fledgling legacy of Hope and Change might be the ticket to a GOP-led Senate in two weeks.

Democrats are the party that made up Barack Obama, and gave us an incompetent administration. If Repubs make that point stick, and they have decent candidates, they will win.

While this is fun reading, and while it is likely to help the Republicans on November 4, the joy will end on November 5. I have heard nothing about any plan to fetter obama’s runaway actions designed to destroy America. Other than possibly having a slight mollifying impact on obama’s last 2 years of judicial appointments, it will not matter whether the Republicans gain 6, or 8, or 10 senate seats, or whether they pick up 5, or 10, or 15 house seats. obama will implement fully his unilateral programs to open the borders, flood the government with new regulations, expand government workers, waste money on worthless domestic and foreign programs, and divide Americans.

Sean Hannity is nobody’s idea of a genius, as he would himself admit. But he does have talent and common sense.

His five-point plan for America has a lot to recommend it. The GOP should adopt it, with perhaps some tweaks. But no twerks…

The location is smack in the heart of Obama’s power base. The Jones Center is the basketball field house of Chicago State University, named in honor of the President of the Illinois Senate, who put Obama’s name on all those bills in 2003 so he would have some record of accomplishment to base his 2004 run for the US Senate on.

The campus is at E. 95th St and S. Martin Luther King Drive. It is only a couple of blocks from the junction of I-57 and I-94. It’s also just a few blocks away from Trinity UCC. It is well served by both expressways and public transportation plus there is lots of parking.

Note that in 2010 Obama was not able to make his basketball playing buddy, State Treasurer Alexi Giannoulias, the US Senator from Illinois.

They are right in 0bama’s “Berchtesgaden”.

Are some of those “people” in the background cardboard cut-outs?

In fact, is the entire 0bama presidency just a metaphorical “cardboard cut-out”?

Can’t say about the crowd, but the Obama Administration is definitely not cardboard cut-outs.

Cardboard people don’t screw up that much.

If Obama ever appears anywhere near me again I’m going to borrow the life-size Richard Petty cut out from the Piggly Wiggly and make sure I get it and me on camera.

Once they dumped the rose colored glasses, voters of hope and change can see the reality of Obama and now get the brilliance of Clint Eastwood’s talk to the empty chair.