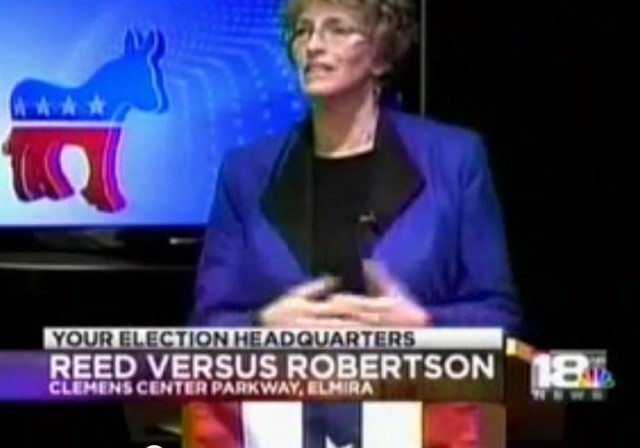 The “highlight” of the debate was the crowd laughing loudly when Robertson claimed Reed was “part of the War Against Women.” That line, and the crowd’s reaction, has received a fair amount of mocking attention. As of this writing, the video has over 15,000 views.

The line was laughable not just for the contrived way in which it was delivered, but also because it made no sense to anyone with local knowledge of Tom Reed. He is the epitome of someone who does not wage a war against women.  He is known to be respectful and thoughtful both in his demeanor and consideration of legislation.

Robertson, once again, obviously was just reading from a playbook, but using it against the wrong person.

The “War Against Women” attack was a major blunder according the post-debate this analysis on the TV station that ran the debate:

In case you missed it, here’s the key line:

The analyst repeated that line in what appears to be a later interview:

“And I think it shows she’s not ready for primetime.”

In the aftermath of that embarrassing moment for Robertson, her supporters are claiming the laughing was misogynistic and sexist:

#NY23, @RepTomReed,@MarthaforNY, So,TR's "fans" were jeering a woman candidate, while laughing at the idea of Reed's disrespect for women?

‘Cause Robertson should be the genesis of a term.

I mean, so’s her candidacy should not be a total loss.

I’m sure she was thinking the audience would agree: Tom Reed is not only running against a woman, he’s displaying wildly ungentlemanly behavior in challenging her views with his own.

[sarcasm]
The nerve of that man!! By not immediately agreeing with her – a woman! – and letting her win, he’s waging a misogynistic “War on Women”!
[/sarcasm]

That the audience both caught on and found it ridiculous, gives me some hope for the future of our Republic.

She makes me want to puke. Grow up, woman!

The biggest question about Martha Robertson is, “How are voters at any level stupid enough to vote for her for any office at all?”

Maybe they feel sorry for her? I almost do – but not quite.

She can’t help being stupid, but she could have just stayed home.

Some serious misogyny happening in #NY23
So,TR’s “fans” were jeering a woman candidate, while laughing at the idea of Reed’s disrespect for women?

So, they consider ANY criticism of a woman to be misogynistic and sexist?
Good to know.

“She can’t help being stupid, but she could have just stayed home.”

Sorry, Estragon, that’s an oxymoron. It would have been smart for her to stay home but since she isn’t she couldn’t. I suspect she got her playbook from ‘someone’ in the Texas governor’s race!