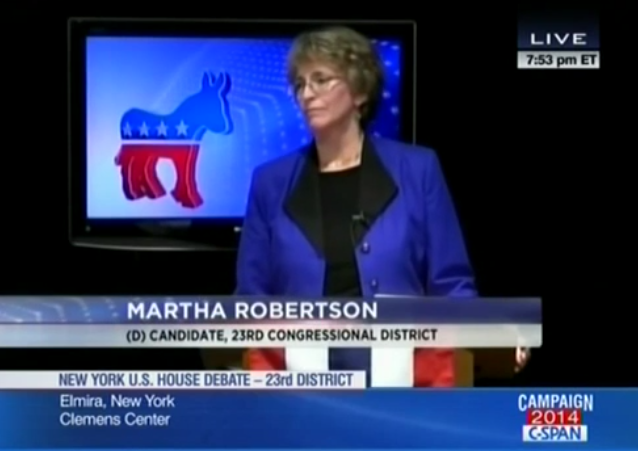 Democrat Martha Robertson has had so many self-inflicted troubles in her campaign against incumbent Republican Tom Reed in NY-23, it’s hard to catalog them all.

Robertson has been written off by the DCCC and every major nonpartison national analyst, a long comedown from the heady days when she was considered a prime “Red to Blue” prospect to flip a Republican seat.

When a candidate loses credibility, it’s hard to regain.

The crowd laughed so hard, Robertson had to ask for more time.

This video clip is being circulated and who knows, may go viral.

Oh, THAT is just brutal…

GOOD…!!! About time that lie lost its currency.

And that’s a good thing!

First thing I thought of while watching that was the shit-eating grin I’ll bet $100 is all up on Professor Jacobson’s face. LOL.

The irony is that long ago there really was a War Against Women. Men lost.

Snark, snark! You are so right, ‘Enry! Most men didn’t even see it coming!

I went down getting off the landing craft in that war. They told me I was going to Disneyland.

Tried to view this video and YouTube has required that I disable safety mode, which I can’t seem to get to work without creating a YouTube account.

Not trying to see conspiracies where there aren’t any, but sure seems like Google is trying to help control the messaging.

She may have a future in stand-up comedy.

Then she could use the Al Franken method to get to public office.

“Then she could use the Al Franken method to get to public office.” You mean stuffing ballot boxes, right?

I was in the audience when Robertson made the “War on Women” comment. It was just too absurd and the otherwise quiet respectful audience couldn’t stay still. They were quiet even during the time when Robertson breaking the rules and being discourteous shouted out “liar” against Reed. The Reed people in the audience obeying the rules stayed quiet when Robertson claimed to be a “bipartisan leader,” a claim strongly refuted by the Tompkins County Republican Chairman previously in the Ithaca Journal when he said Tompkins Republicans know she is not “bipartisan” but a bitter activist partisan. The interesting question is whether Robertson truly believes her own propaganda? Meanwhile, her campaign is a “flop” according to political analyst Rothenberg and the race was moved by political analyst Cook (cookpolitical.com) to the Solid Republican category.

Is it me but does she look like “Miss Jane Hathaway” from “The Beverly Hillbillies”?