“Look, it’s not a good dynamic for Democrats out there.” 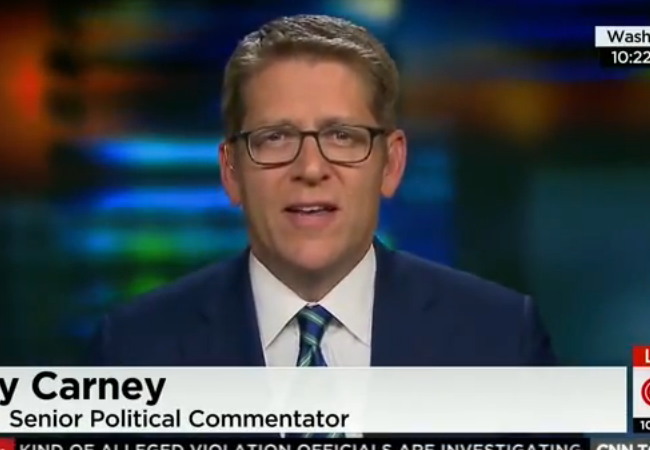 The last time we checked in with former White House spokesman Jay Carney he was predicting doom for Democrats in the midterms. It looks like he hasn’t changed his mind.

It’s also interesting to note that Carney is acknowledging the fact that so many Democrats are distancing themselves from Obama.

Jay Carney: ‘No Question’ It Will Be A Good Year For Republicans, Bad Year For Democrats

“The Democratic candidates have to thread this needle very carefully,” Carney said. “It is true that when you have an unpopular president of your party, you don’t want to be associated with him.”

Carney acknowledged that a number of candidates are jumping the Obama ship and going to great lengths to distance themselves from the president, but warned them against “going too far.”

“Look, it’s not a good dynamic for Democrats out there,” Carney said. “The goal has to be, in this cycle, to run local and state races and not have their races be nationalized. Because if they’re nationalized, they’re going to be hurt by the overall perception of president Obama right now.”

Carney may be onto something.

Cristina Marcos of The Hill reports there is fear in the Democratic ranks:

The Democratic Party’s worst fears about the midterm election look to be coming true.

Polling in recent weeks suggests turnout on Election Day could be very low, even by the standards of recent midterms. That’s bad news for Democrats because core groups in the liberal base are more likely to stay home than are people in the demographic segments that lean Republican.

A Gallup poll last week found that voters are less engaged in this year’s midterms than they were in 2010 and 2006. Only 33 percent of respondents said they were giving at least “some” thought to the upcoming midterms, compared to 46 percent in 2010 and 42 percent in 2006. Even more troubling for Democrats, Republicans held a 12-point advantage when those paying “some” attention were broken down by party.

I’ve said this before but it bears repeating – Republicans should take nothing for granted and neither should we.

What a joke that headline is. He is NEVER in the Oval Office he is in perpetual fundraising/community organizing mode 24/7.

…when he’s not out “staying the course”. The golf course, of course.

“I’ve said this before but it bears repeating – Republicans should take nothing for granted and neither should we.”

It’s been said a million times: The only poll that matters is the one on election day.

Both takes are not necessarily true. It don’t count if you don’t vote!

This is very bad news for Republicans. Carney NEVER tells the truth!

That’s funny, that is EXACTLY what I was thinking when I saw the headline. I can only hope that, since Carney is no longer White House Spokesman, he is trying to wean himself back to normal by telling the truth in small doses. 😉

Sure… we’re likely to have more popular support, but will we have more support among the people (real and otherwise) who show up at the polls?

Sit down and shut up stooge.

I’m actually going to the polls instead of mailing in a ballot.