“It’s not going to be a good year for Democrats.” 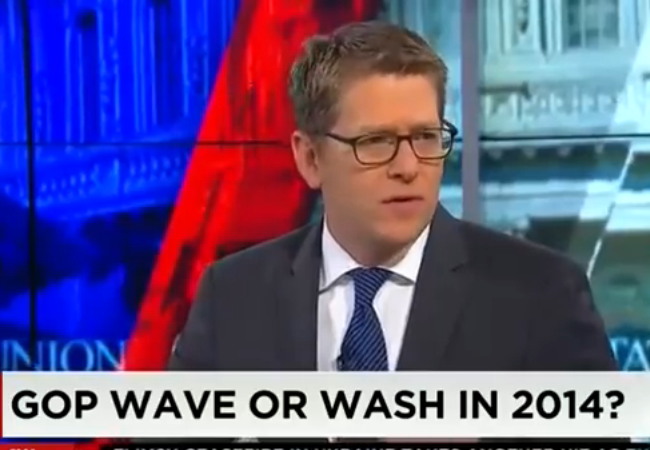 Former White House spokesman Jay Carney used his new postion as a CNN contributor to lower expectations for Democrats in the approaching midterms.

Jay Carney: ‘It’s Not Going to Be a Good Year for Democrats’

In his new guise as a political commentator for CNN, former White House Press Secretary Jay Carney dished out conventional wisdom on State of the Union Sunday morning, which in this case meant diagnosing the Democrats’ chances in the upcoming midterms as poor.

“It’s not going to be a good year for Democrats by definition,” Carney said. “The sixth year is always particularly bad for a president’s party. You couple that with the fact so many seats are defended by Democrats in red states where Mitt Romney did very well against the president, double-digits in most cases, and there’s no outcome in November that anybody could say would be great for Democrats, except for barely holding onto the Senate.”

Somebody has been writing on the wall…in cursive.

And ANYBODY can read it if they have two brain cells to rub together. It is SO obvious, that even an inveterate liar like Carney has to acknowledge it.

Hey he has to get his credibility back somehow. One way is to admit to damaging stuff that everyone already knows.

I have no idea why ANYONE gives ANY credibility to the Carney Barker. He’s always been a smug, nitwit. He was always very good at not answering the question, which you would think would be the antithesis of “the most transparent Administration in history.”

No. the Carney Barker was all about misdirection and belittlement of the press corps(e) who dutifully took dictation from the podium, rather than asking the questions that they used to batter Fleischer, Perino, McClellan and Snow with.

We already know this; there’s no virtue in pretending to forget it.

Let’s not forget that we also need to focus on 2016, when the 2010 Republican successes will be defending. The Democrats are counting on recouping their losses then.

he’s running cover.Thats all he is doing . Dems are setting up their battle rules now for Nov ..smart . lets see how the stupid party responds !!