Gwyneth Paltrow Like-Likes the President (or Something)

Gwyneth Paltrow Like-Likes the President (or Something)

“You’re so handsome I can hardly speak” 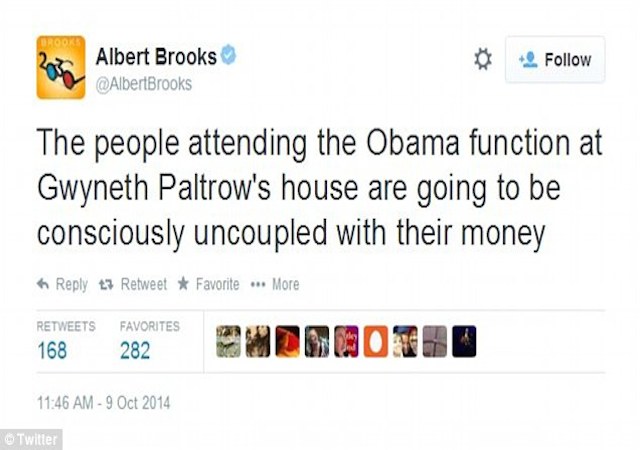 Yesterday, the Hollywood glitterati flocked to Gwyneth Paltrow’s home and paid $15,000 a plate to attend a fundraising reception with President Barack Obama.

Hollywood, of course, can always be counted on to make things painfully awkward when it comes to heaping praise on the President and his progressive policies, and Paltrow did not disappoint:

Via the Daily Mail:

‘I am one of your biggest fans, if not the biggest, and have been since the inception of your campaign,’ she said, adding that she thinks both of his campaigns and his presidency will be one of the most important and most scrutinized of all time.

Paltrow noted the approaching Nov. 4 midterm elections in which Democratic control of the Senate is at risk.

Paltrow mentioned equal rights for women in the workplace, an issue ‘very important to me as a working mother,’ said the actress, who Forbes says makes around $19 million per year.

Yes, I’m sure all those working mothers out there just now noticing the remains of this morning’s spit-up on their work blazer totally identify with Gwyneth on this point.

And then of course there’s this:

.@GwynethPaltrow gazing at #Obama as he speaks at fundraiser at her LA home. pic.twitter.com/6gGd9rPP7y

Someone call Chris Matthews…he just lost his #1 spot in the Most Awkward Comments Made About the President of All Time draft rankings.

Just for the record…

I think of Gwyneth Paltrow as a “thought leader” exactly as I do Lena Dunham.

Iirc “I’m your biggest fan” is a quote from Steven King.

I’ve thrown up a little in my mouth.

Is that really you, Leni Riefenstahl?

Unlike other disciplines that are constrained by physics and systemic consequences (e.g., engineering and medicine), acting is about persuasion through pretense, projections and fantasy.

So it’s no coincidence that Hollywood has always been so drawn to the Democrat Party. Because the industry of useful idiots and the party of utopian-promising tyrants share the same master expertise in bogosity.

Maybe she’s been too busy to pay any attention to the news for the past several years, but, for quite some time now, the president has been seizing all the power he wants.

And nobody’s stopping him.

And that is a far, far more serious threat to our republic than ISIS or Ebola could ever be.

Another one of those British wannabes (yes she is American but she identifies with and mimics the British and has lived in Lodnon) actors/actresses who fancies themselves serious theater and classical thespians but in reality makes their money in U.S. feature films (see Emma Thompson).

this is why “talent” should be muzzled anytime they are not reading from a script.

they lack the wit for intelligent speech, and can only parrot the words of people with brains

Serves to reinforce the ditzy image of the bleach blonde bubblehead.

Liberals cease emotional and intellectual development at age 14. She is just another example of the junior high “thinking” that we see daily from the left. She can’t help it, I guess.

Do her comments about the President’s attractiveness constitute gender-biased objectification, or whatever blather applies? What would Hillary say? Or Sen. Gillibrand? I guess Gwynneth doesn’t like her Presidents porky, either.

People With Unpronounceable First Names United (PWUFNU) support each other.

Gweneth Dumbeth proves the old adage: best to be thought a fool than to open your mouth and prove it.

Her real name is Gwynneth Lewenski. I hope Chris Martin is on the run from this nut job.

Of course when Ronald Reagan was president, the Left told us that actors were the stupidest people alive.

Not only did Reagan negotiate the SAG contract that created residuals that have made these idiots Saudi-prince rich, but he apparently gave them political confidence as a class they didn’t have before. However, unlike Ronaldus Magnus, 99.999% of actors/actresses don’t have the intelligence or depth to buy groceries, much less make sound political decisions.