Any reasonable person keeping up with the news cycle knows that Democratic leadership doesn’t inspire much confidence in the American people. Legislation dies in the Senate at the hands of a petulant majority leader; both the IRS and the DOJ have come under fire for targeting Americans based on political affiliation; our President golfs while the Middle East burns.

In fact, one might say the only thing Democrats are really good at is riling up the base over token “hot button” issues that never go anywhere in Congress, but make for good primetime talkathon fodder.

A new poll released by Gallup yesterday has quantified the skepticism of the American people, and shows empirical proof that the games Democrats play have serious consequences when it comes to the level of trust voters have in their ability to lead on the major issues.

In late September, Gallup asked registered voters to rate the importance of 13 preselected issues, and then to identify which party they believed would do a better job handling those issues. The results looked like this: 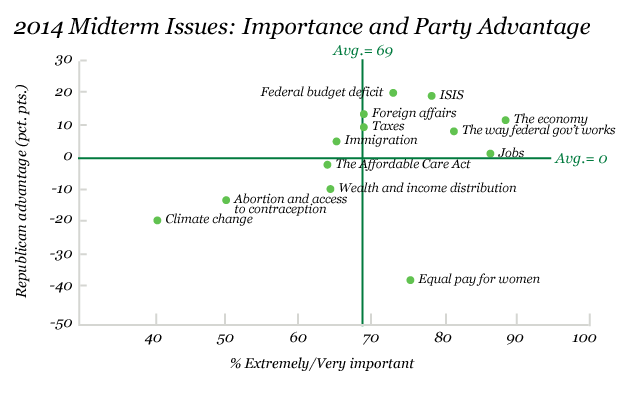 Republicans currently lead Democrats on 4 of the top 6 issues registered voters prioritize: the economy, the functionality of the federal government, handling the threat of Islamic militants, and managing the budget deficit. This general feeling could lead to gains for Republicans in the 2014 midterms: Via Gallup:

Notably, as the GOP tries to gain control of the Senate, the current GOP advantage on the economy nearly matches the 12-point advantage the party held in August 2010, shortly before the midterm elections that gave the Republicans control of the House of Representatives.

The GOP’s lead on the federal budget deficit has also widened, to 20 points from 14 points in April, and is now higher than at any other time during Barack Obama’s presidency.

Republicans are also in a better position than Democrats on several new items included in the poll, including the way the federal government works and the situation in Iraq and Syria. Republicans hold a solid eight-point advantage on how the federal government functions, despite gripes from Senate Majority Leader Harry Reid (D-Nev.) that “Republican obstruction” is the source of federal dysfunction.

Harry Reid may be kvetching, but voters aren’t listening—unless he’s talking about abortion and birth control, climate change, or equal pay for women. On those issues, Democrats have an edge; voters, however, don’t prioritize those issues compared to those Republicans lead on.

This election is being served up to Republicans on a silver platter—but that doesn’t mean we won’t have to work for it. November 4 is coming, and we should be spending all of our time showing voters that the trust they’ve put in us on issues like the economy and managing the deficit hasn’t been misplaced.

Image within from Gallup.

Understand that there are people who are nearly single=issue voters with respect to climate change, equal pay, and abortion. Republican messaging on this is in the tank. And that can be fixed, Allowing Democrats to lie on issues of importance to their base is a mistake.

For example, with respect to abortion: that is seen as a fundamental right, and there are people who will sacrifice their economic rights to keep that one. However, it is the implementation of abortion “rights” — Wealthy Democratic policymakers have set it up to be a eugenics program.

Here’s what I mean. Zombie went to work and found out what Margaret Sanger had to say about why we should have abortion freely available.

What’s that cloud of dust on the horizon? It’s probably the Jaws of Victory Defeat Snatch Squad coming to the rescue.

Relax – everything will be fine.

Looks like the Deemocrats are pulling the plug on Grimes…

The odd thing is how much better Obama’s Senate toadies are running. Pryor, Begich, Landrieu, and Hagan are all polling double digits ahead of Obama’s job approval in their states, despite all of them keeping well over 90% pro-Obama voting records and all being, in effect, the “deciding vote for ObamaCare” on top of it all.

But people who look at the world through distorted lenses do tend to be Democratic voters.