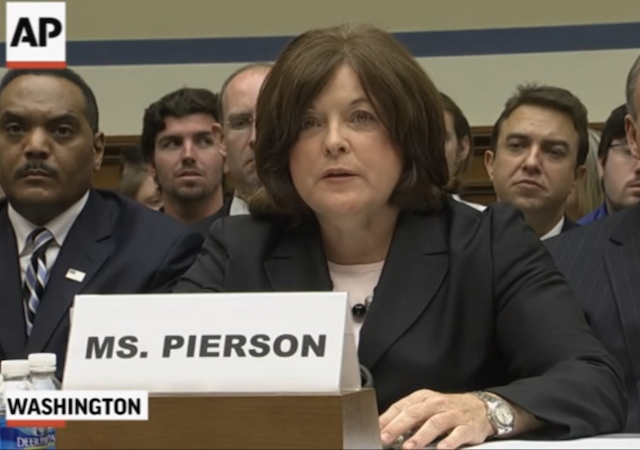 White House correspondent for The Hill Justin Sink broke the news on Twitter:

In the wake of last month’s breach in White House Security, high-ranking members on both sides of the aisle have called for Pierson’s resignation:

Sen. Chuck Schumer, the No. 3 Senate Democrat, and Sen. Lindsey Graham, a Republican, were both to issue public calls for Pierson’s resignation on Wednesday afternoon, their offices said. And Rep. Jason Chaffetz, a senior Republican on the House Oversight and Government Reform Committee, said Pierson should either resign or President Barack Obama should fire her.

“Unfortunately, the Secret Service director’s appearance before the Oversight and Government Reform Committee has left us with more questions than answers,” said House Speaker John Boehner, R-Ohio. Although he stopped short of calling for Pierson’s resignation in a statement, he backed a call for an independent investigation and said, “the president must make a swift determination on whether the agency is being well-served by its current leadership.”

You know, it would really show how openminded and contrite America is if Obama hired an Islamic radical for this post. Maybe CAIR could help with a candidate search.

In other news, the president learned about the resignation from CNN, after his latest golf outing…

No! He didn’t learn it from CNN. It was in his morning security briefing! Oh, wait…

Take responsibility and lead, or appoint an “independent” commission?

Oh, well. Commission it is. When’s my tee time again?

[Above excerpted from the forthcoming book,
Closed Quarters: Inside Obama’s Tiny Little Brain
by Willy Makitt].

Would it be any surprise that the rank and file SS give as much of a crap about Obama’s welfare as he gives about their efforts?

If they don’t give a crap they should be fired.

Glad to hear that Joe Clancy is the new interim acting director. He is a true professional, above any partisan BS.

Now, stealing cable will get you Federal time.

From the White House: “Quick, someone find an Asian, Latino or African American – preferably female or transgender – who can take over the Secret Service!”

The only bigger putz than this woman is the idiot president who appointed her.

Well, technically, she can’t be a ‘putz’ because she lacks a putz, which is the Yiddish word for penis.

Which is part of the reason she didn’t do so well as director: the mostly male operatives likely didn’t want to have a woman in charge of them, anymore then a pro football team would want a woman coach in charge of them.

Foisting women into action-alert environments like the SS is a recipe for disaster.

“Well, technically, she can’t be a ‘putz’ because she lacks a putz, which is the Yiddish word for penis.”

He’s not speaking Yiddish, he’s speaking English, and in the English dictionaries, a putz is a stupid or foolish person, you know, like people who desperately need to score points in discussions so far over their heads they must resort to nitpicking in order to make someone look stupid or foolish, but ironically, comically, and unknowingly make themselves out as stupid and foolish.

Well, I do have to give her props for doing the right thing and resigning. At least someone in DC FINALLY is really taking responsibility.

Makes me think of this good article in the current issue of Townhall magazine.

“Why Obama’s Majority Can’t Govern” basically explains why the 15-seconds of fame celebrity fake of Obama can not get anything going on anywhere – not even in White House security.

This women ran the SS HR department! Obviously unqualified to lead the SS. She bragged that no shots were fired when that guy ran over the fence and into the White House! Proves that she was unqualified.

As I understand it, Pierson’s professional background prior to joining the SS was as a police officer. I think the director ought to come from the military. I can’t believe it needs to be said, but no matter what the director’s professional background, competence is required at a minimum. The WH hires politically from a demographics checklist and competence is an afterthought, a pleasant extra if the hiree happens to possess it. Hillary Clinton, John Kerry, Kathy Sibelius, Eric Holder, etc., etc.

First priority: Will this appointee toe the liberal line?

Second priority: Does this appointee fill a political need as to race, gender, or as a champion of ____________ (fill in liberal cause)?

Third priority: Will this candidate pass the vetting process?

Fourth priority: Does this candidate have any expertise or demomnstrated competence in the field of appointment?

I’m betting LI readers can list other priorities I’m omitting that come before the fourth.