Alison Grimes repeats: Sure I voted for Hillary, but how dare you ask me about Obama

Alison Grimes repeats: Sure I voted for Hillary, but how dare you ask me about Obama

New Rasmussen poll has Grimes 8 points down to Mitch McConnell. 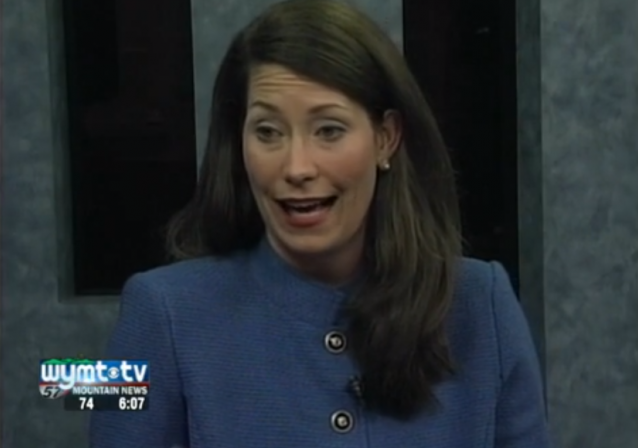 Let’s face it, Alison Grimes hasn’t been helped by any of her recent missteps regarding whether she voted for Obama.

She repeated the refusal to answer the question on local TV again:

U.S. Senate Candidate Alison Lundergan Grimes continues to refuse to say who she voted for in the 2008 and 2012 presidential elections. On Friday, Grimes sat down with WYMT’s Steve Hensley for a taping of an episode of “Issues & Answers: The Mountain Edition.” Here is an excerpt from the interview:

Steve Hensley: “You’ve also said in the past that you voted for Hillary Clinton in the 2008 presidential primary so what’s the difference?”

Secretary Grimes: “In 2008 I was not Secretary of State and what happened at that convention is all on record so nothing that wasn’t already fully disclosed was offered up. It’s a matter of principle as I told Bill Goodman, I’m the chief elections official. It is a constitutional right provided in Kentucky’s constitution for all Kentuckians to cast their ballot in privacy.”

Hensley: “If President Obama offered to campaign for you in Kentucky, would you accept?”

Grimes: “Well, I’ve said I speak for myself, Senator McConnell doesn’t understand that. He and his henchmen have spent about 50 million dollars trying to put Barack Obama on the ballot this year. He’s not, I am.”

According to a new poll from Rasmussen, Mitch McConnell has taken a significant lead:

Senate Minority Leader Mitch McConnell has crossed the 50% mark now in his bid for reelection in Kentucky.

Kentucky remains Leans Republican in the Rasmussen Reports’ 2014 Senate Balance of Power rankings. Democrats have had high hopes all year that Grimes, Kentucky’s current secretary of State, could unseat McConnell who has been a member of the Senate since 1985. He’s been the Senate Republican leader since 2007.

The RCP poll average has McConnell up 4 pts.

Mitch McConnell sometimes takes heat from conservatives for being too liberal and too establishment but when compared to the alternative, at least he’s a reliable vote against Obama.

Critics can say what they will about McConnell but he gets some things right.

Take for example, his press release on the resignation of Eric Holder:

McConnell on the Resignation of Eric Holder

“I could not support the President’s nomination of Eric Holder in 2009 because of the many questionable decisions he’d made as Deputy Attorney General. Five years later, I’m confident in the wisdom of that decision. Holder has placed ideological commitments over a commitment to the rule of law. These are not the qualities the American people look for in the nation’s highest law-enforcement official. So I will be scrutinizing the President’s replacement nominee to ensure the Justice Department finally returns to prioritizing law enforcement over partisan concerns.”

You may also have forgotten that McConnell is a strong advocate of free speech:

If I lived in Kentucky, he’d have my vote.

Sorry, Ms. Grimes, but President Obama (a Democrat) said it himself, “My policies are on the ballot this year.” If people think that in voting for a Democrat it means they support the policies of Barack Obama and they don’t vote for you then so be it. You hitched your cart to the wrong horse and now you’re too cowardly to say you did so.

Hensley: “If President Obama offered to campaign for you in Kentucky, would you accept?”

Grimes: “Well, I’ve said I speak for myself, Senator McConnell doesn’t understand that. He and his henchmen have spent about 50 million dollars trying to put Barack Obama on the ballot this year. He’s not, I am.”

[Sarcasm] Yeah. Like ~Nobody~ is going to notice that you completely avoided answering the question.

What other lies will she tell when we show her the many video tapes……….

“Why, yes, Kentucky, I AM exactly as stupid as I look – so you can be assured if I’m elected, what you see is what you get!”

That’s her last, best argument. Maybe she could borrow Josh Earnest to make it with practiced sincerity?

McConnell was also the leader of the fight against McCain-Feingold, although it was a losing effort in Congress. And he is the most conservative Republican Leader in the Senate in history.

Say, isn’t it about time that some of the local half-wits who appoint themselves the Purity Police to show up shouting that McConnell is a “RINO” who is the same as Reid and/or Obama?

Maybe the attendants found a television show they would watch, or got them to take their meds.

Ok, Ms. Grimes, can you tell us which Obama policies you would fight to repeal, if elected?

That’s a great question, but she’d just lie her ass off.

It’s what Collectivists do to get elected.

I wish McConnell and Boehner would lose this year, as long as we make up for it with wins in other districts. These 2 establishment RINOs make me sick. They concede and appease with Congressional Democrats every time. I’d love to see them go. I live in Boehner’s district and unfortunately I can’t see this happening any time soon.