Feel free to LOL, because they sure did. 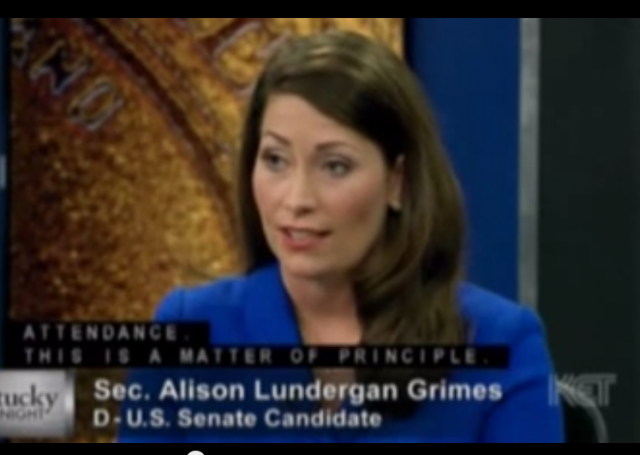 After a significant investment in support of Kentucky Secretary of State Alison Lundergan Grimes, the DSCC had not reserved time for the final three weeks of the race and, as of today, is no longer on the air.

“The DSCC has now spent more than 2 million in Kentucky and continues to make targeted investments in the ground game while monitoring the race for future investments, but is currently not on the air in the state,” a DSCC official told CQ Roll Call.

McConnell has held small but consistent leads in nearly every recent public poll.

We all know that Grimes made an idiot of herself by invoking her Constitutional right to not be embarrassed by her previous support of Obama, but apparently things are so bad on the ground that even the media has given up hope and decided to enjoy the Grimes campaign’s downfall.

Today’s dose of schadenfreude, via the Washington Free Beacon:

ABC’s Jon Karl questioned Earnest after he “boldly” admitted that he voted for his boss.

“Do you believe you’ve violated the sanctity of the ballot box by telling us who you voted for?” Karl asked.

“I’ll leave that for you guys to decide,” Earnest said.

“I’ll tell you that I voted for the president,” Earnest said with a smirk.

If it’s wrong to be enjoying this way, way too much, then I don’t want to be right.

Perhaps they *should* have recruited Ashley Judd.

Sorry. The though of Senator Judd makes me all stupid, in a Joe Biden kinda way.

That’s the sound of the plug getting pulled…

She invoked her “constitutional right” not to disclose that she’d twice been an idiot and voted for Obama? Where exactly in the constitution does it say that people who choose to become candidates for public office have the right not to disclose to voters their prior acts of stupidity? Is it near the “good ‘n plenty” clause, or is it one of those invisible emanations from a penumbra that are detectable only to black-robed justices?

People are assuming she won’t say who she voted for because she voted for Obama and doesn’t want him hanging around her neck like an albatross.

But what if she actually did NOT vote for him. If she cops to that, Dems will drum her out of the party.

Talk about a rock and a hard place!

Remember it was just LAST WEEK the DSCC was bragging that they were considering a huge late investment in Kentucky because McConnell’s head would be such a prize in a tough year.

Grimes was even a 2012 Democratic National Convention delegate who voted for Obama there. Who did she think was fooled by her obstinance?

Too bad, because I was planning to use the Democrats’ late national push against Mitch to rub in the faces of those half-witted lunatics who claim he is “no different from Harry Reid” or “in service to Obama.”

No matter – it isn’t as if they don’t supply a steady stream of nonsense to mock.