“These policies are on the ballot. Every single one of them.” 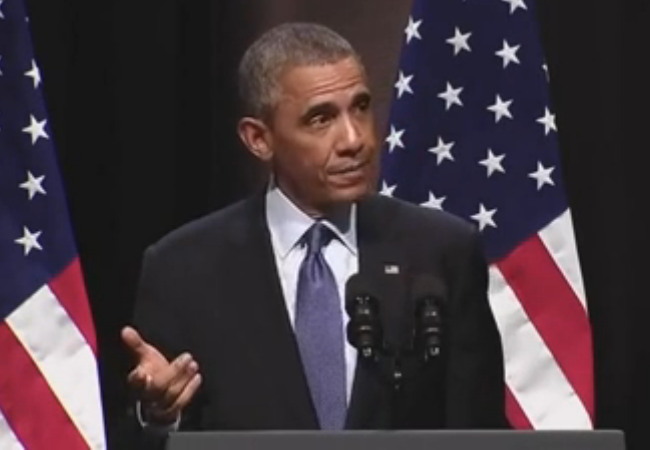 For his part, the president isn’t doing them any favors.

In a speech at Northwestern University yesterday, Obama tied himself and his deeply unpopular policies directly to the Democratic Party and the 2014 elections.

You can imagine Sen. Mark Pryor of Arkansas or Sen. Kay Hagan in North Carolina or Alison Lundergan Grimes in Kentucky grimacing when they heard those 28 words. That trio has spent much of the campaign insisting that this election is NOT about Barack Obama, that it is instead about a choice between themselves and their opponents.

The reason for this distancing strategy is obvious: President Obama is deeply unpopular in many of the states that will decide which party controls the majority in 2015. Of the seven seats rated “toss ups” by the non-partisan Cook Political Report, Obama lost four of them (Alaska, Arkansas, Louisiana and North Carolina) in 2012. He also lost in three Democratic-held open seats — Montana, South Dakota and West Virginia — now viewed as sure-thing pickups for Republicans. If Republicans only won Democratic-held seats where Obama lost in 2012, they would pick up 7 seats — one more than they need to recapture the majority.

Here’s the video, via the Washington Free Beacon:

Let’s hope a majority of voters take Obama at his word. His policies are the Democratic Party’s policies.

He is them. They are him.

Barry is gonna get “coldcocked” next month!

As good a double entendre as any!

Double what? Please do not use words more than one syllable. Barry does not understand.

“Coldcocked: to hit (someone) very hard : to knock out (someone) with a hard punch”

“Coldcock is currently in the bottom
40% of lookups on Merriam-Webster.com.”

The general parlance holds a coldcock to be an unexpected first punch that knocks the recipient down or out.

By that usage, November wouldn’t qualify. This is one they should see coming from a ways off.

He just can’t help himself, can he?

Years ago some (kinda) honest observers among the Deemocrats recognized that Pres. ScamWOW was destroying their brand.

He cannot be what he is not. He is a totally radicalized, racist Collectivist with a profoundly pathological personality disorder.

Barack Obama is a product of the Democratic Party. They went hunting for a candidate having a certain appearance, handed him a Senate seat and ran him for President. He had no experience, no reputation, and no accomplishments to his credit. A party runs a person like that for the purpose of having a person uncritical of their activities in high public office. He’s the closest thing they could have come to having nobody at all in the White House.

His arrogance knows no bounds.
Hopefully he’ll take down the Democrat party.

My first reaction to this was the same as yours, but I wonder if we’re both wrong.

Remember the lesson of 2012: Romney won independents by a solid 5 points, and 10 points in the swing states he spent most of his money in. And he lost the election. This was totally unprecedented, but it’s exactly what the Obama folks were trying to do. And they did it.

The Obama electoral strategy is *all* about firing up his extreme base and getting them out to the polls at a higher rate than GOP voters and independents.

Perhaps this will actually help Democrats to hold the Senate — it seems counterintuitive, but voter turnout is lower in a midterm, so the GOTV effect should be even bigger.

Tell all your friends: get to the polls in November. Every vote counts!

The lesson of 2012 is that the GOP cannot win elections without the tea party base. Nothing else. Jugears got less votes than he got in 2008. Romeny got much less than McLame got in 2008.

The donkey party did not win in 2012. And they won’t win in 2014 or 2016. Who prevails in each race remains unknown. We will just have to see how the GOP conducts itself but right now it ain’t looking real good for 2016.

Fair point by clintack. The CATALIST folks are working very hard to get every Dem/Prog voter to the polls. Those are exactly the voters most susceptible to the point Obama just made — the kind of people who have the bumper sticker that reads, “ObamaCare: signed, sealed, delivering”.

They believe that. They’ll believe Obama. CATALIST will identify them and the operatives will have them vote (often). It’s quite an advantage in a low-turnout election which we formerly thought favored Republicans.

meanwhile, the GOPe shoved a whole bunch of RINO candidates down the throat of their base, and now can’t figure out why those same people aren’t donating money or volunteering to help campaigns…

there’s a reason they’re known as the “Party of 5t00pid”… it’s because they do stupid 5hit over & over, always expecting a different result.

By “shoved down the throat,” do you mean those candidates who won more votes than their opponents?

Flawed candidates tend to lose. There is nothing mysterious or nefarious about it.

Those who refuse to support their party’s democratically chosen nominees aren’t really members of the party, they are just whiny malcontents. When their efforts succeed in nominating losers like O’Donnell, Angle, Joe Miller, Buck, Maese, and Mourdock, they then blame the “establishment” for the pathetic losses.

If you hate the GOP so much, join the Democrats or start your own fringe party. Constant complaining isn’t going to attract support any more than weak challengers have.

By “shoved down the throat”, he means see: Mississippi.

Someone wrote it, someone approved it, and Obama said it, demonstrating stupidity from top to bottom. But, stupidity is inherent in the party so maybe they do know what they’re doing. Who was it that said, “Stupid is as stupid does.”?

Another case of Obama going off script and saying something stupid that damages his own party, and himself, of course. This one is extra stupid, though. His damning 28 words are already appearing in GOP ads across the country. A GOP candidate wants to hang Obama around his/her opponent’s neck and Obama just gave them a golden videotaped quote with which to easily do just that.

There are a thousand million 0bama/Dem-failures Repubicans could/should be mercilessly hammering away with in this last month before the election . . . but they’re afraid of sounding tough?

Dems have a remarkable gift for pulling out the extra votes at the finish line in tight races. Who knows where they ‘find’ them.

Republicans better be playing with the same ‘rules’ as the Dems this time around — EVERYTHING is at stake (not that is wasn’t in ’12 – but it’s do or die this year).

The Republicans should be running ads like this in every state:

Thom Tillis (R), current NC State House Speakerandidate, is running against US Senator Kay Hagan (D) and struggling big time. He’s the ‘unbeatable’ candidate the GOP elite in DC handpicked, and used their money to clear out the TP and other GOP primary candidates. Karl Rove swept in for the Hagan tilt, GOP establishment all the way.

I live in NC. I’ve seen the same Tillis ad about five times and that’s it. No local appearances, no junk mail, no phone calls, no nothing. He refused to resign the NC House speakership to run – and got caught in special session all summer long, unable to campaign or fundraise. He’s playing it totally on defense, no offense, and taking the vote for granted, apparently certain that enough NC-ers will be voting against Hagan. I’m seeing no bumper stickers, no yard signs, no roadside signs, no billboards, and very little on TV. Except for billboard, I’ve seen all of those for Kay Hagan.

Only a month to go, and the DC-run Tillis campaign remains pretty much a no-show beyond the occasional TV ad.

I sent my one and only contribution this year to Greg Brannon.

In the “Game of Thrones”, President Obama wins a stool in the corner.

Harvard must be proud!

not to worry: the GOPe will manage to waste this opportunity, just as they threw away their chances in 2012.

but they’re still in DC, wallowing in the pork, so they don’t care.

Yeah, I didn’t think so either.

This could well be the first statement by Obama which has not been later proven false.