You get ten of these

You get ten of these 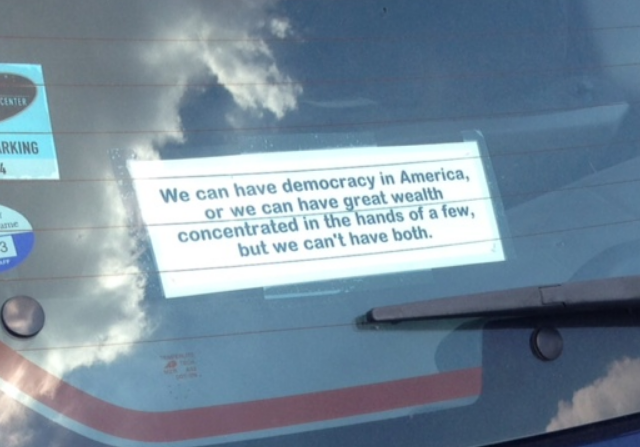 The second part from Ulises, who previously said that for every bumper sticker in Maryland saying “Not A Liberal“:

ummmm…..america was never supposed to be a democracy. our founding fathers knew that the majority of voters were too stupid, greedy and covetous of other’s stuff. plus history.

No where can the word “democracy” be found in the US Constitution nor in any one of the constitutions of the 50 (or 57 states; but who’s counting) states. The form is that of a republic.

Fed. No 10 (Madison), “A republic, by which I mean a government in which the scheme of representation takes place, opens a different prospect, and promises the cure for which we are seeking. Let us examine the points in which it varies from pure democracy, and we shall comprehend both the nature of the cure and the efficacy which it must derive from the Union.”

JM has said this of democracies, “Hence it is that such democracies have ever been spectacles of turbulence and contention; have ever been found incompatible with personal security or the rights of property; and have in general been as short in their lives as they have been violent in their deaths.”

….truly The People’s Republic of Maryland.

I do believe this subtle lie that the US is a “democracy” has led to much of this misguided, naive acceptance of socialist redistribution and Marxist condemnation of profit as “greed” for the “elite.” That we are a Constitutional republic with open, democratic, private individual/secret voting, all within the boundaries of the rule of law – it’s just not taught, not learned, not understood anymore.

Anyone who knows anything about Marxist history, the Mao/Chinese Marxist government, the Stalin government – any of them! – knows that the elite “few,” the rich and greedy ones ARE THE GOVERNMENT TYRANTS where “wealth concentrate[s]”.

Thought so. This guy’s problem is that he has no understanding of either great wealth or democracy. He’ll go for a walk in his neighborhood, paste some new bumper stickers on his car, come home, turn on the lights, mix himself a bourbon and water, flush the toilet when finished, take a warm shower, surf tv channels (in vain) looking for something to watch, post a response to his favorite (or most despised) blog, put his kids to bed in separate bed rooms, go to bed for a good nght’s sleep, do it all over again the next day.

Democracy? That’s when the Koch brothers vote the same way Harvey Weinstein does.

I forget to add, I took the picture in the parking lot of the Maryland Science Center and the car belongs to an employee. The science center is a 501 (c) 3 non-profit, and it gets its funding from private corporations and government grants. I wonder if this guy/gal knows where those companies get the money that pays his/her salary…

Of course not. As long as the money is there, they don’t care where “there” is.

And of course the Science Center is loaded with all sorts of politically correct propaganda (funded, in part, as you note by those selfsame evil corporations.)

This administration is getting perverse results.

As a Texan living in The People’s Republic of Maryland, I routinely enounter these types. They bitch about tax dollars going overseas to feed and clothe the poor, because they want “free” birth control and ObamaPhones.

When I am President 🙂 I will tax these people 99% and send their money to Africa, so the little Marxists can live up to their ideals.

So priceless to see spoiled American brats complain about concentrated wealth. We are all the 1% compared to the rest of the world.

Every now and then while arguing with “progressives” I like to go nuclear. In a calm voice I’ll say, “I think the next Republican President should imprison Democrats, seize their assets and redistribute them to the rich.”

It’s total silence for about 15 seconds and most of them walk away.

The leftists proudly display these quotes as if they are directly from “Moses, the Lost Commandments”.

Bumper sticker mentality sees wealth as gold coins stacked high in a secret chamber. But much of that wealth is actually the machinery of production.

The very richest own big pieces of Microsoft or more ethereal Facebook and Google. And with six years of ZIRP (zero interest rate policy) it is true some banks and hedge fund junkies have amassed a lot of paper wealth, and the stock and bond market bubble reflects currency inflation more than real “capital”.

But traditional wealth is earned by building a factory and overseeing its production and personnel. It is difficult to redistribute the “wealth” that is this country’s means of production.

There is now misallocation of funds toward the one percent, directly caused by a decade of artificial easy money and now Obama’s ungodly quantitative easing. We kicked the can down to the end of the road, and now QE has taken us off road so they can keep “kickin’ it”.

We can have a limited government republic, or we can give unelected bureaucrats and social engineers control over our lives, but we can’t have both.

In Dem-speak, “democracy” means that a few people with limitless power can take all your earnings and resources and then “spread them around” so that no one has any more than anyone else — except the people who are redistributing the wealth (and their special friends), who deserve to get an extra-big piece of the pie as a reward for their devotion to egalitarian justice.

No. When they say “Democracy,” as Constitutional professorØbama loves to call it, they mean just that: a classical, Athenian democracy where the majority rules without restraint. In a quest for that, the Left is loading the courts and putting people on the government dole, so eventually, we will be be another kind of RINO: Republic in Name Only.

Actually, no. Democrats aren’t really devoted to majority rule because the majority often votes against their “progressive” agenda, which is exactly why they’re loading the courts with like-minded judges, as well as loading up ballot boxes with fraudulent votes.

Leftists think “democracy” is basically a synonym for “equality.” Sometimes they specify “economic democracy,” meaning economic leveling, but when a leftist says “democracy” without a qualifie4, it often means pretty much the same thing.

Essentially ends-justifies-means fascism. For our own good, of course.