Even NOW has doubts about Wendy Davis’ chances

Even NOW has doubts about Wendy Davis’ chances

It sure looks that way. 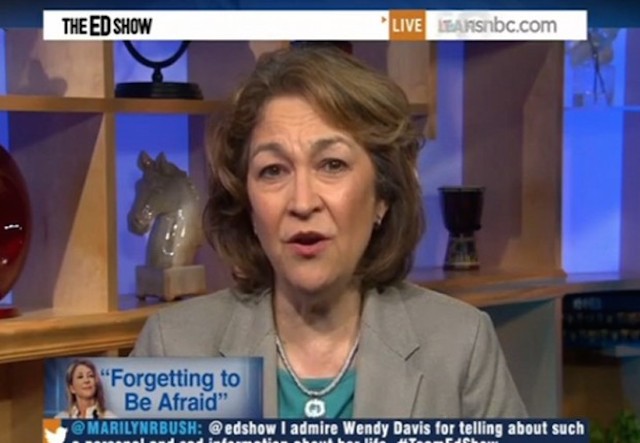 We previously noted that Wendy Davis struggled with female support in her bid to defeat Greg Abbott.

The most recent polling shows the two more or less even among women — not good enough for Davis to have any chance of winning.

Davis’ September Abortion Surprise seems to be having little effect.

Mark Finkelstein of News Busters has the story:

NOW Throwing in Towel on Wendy Davis? Prez Says ‘Always Been Very Much an Uphill Battle’

Are even Wendy Davis’ most ardent supporters detecting the handwriting on the wall? Seems like it. There was NOW president Terry O’Neill, on this evening’s Ed Show, coming close to throwing in the towel. Said O’Neill: “this has always been very much an uphill battle.” Translation: Davis is going down in her race for Governor of Texas.

O’Neill’s comment came in the context of a discussion of Davis’ recent disclosure that she had, reportedly for health reasons, undergone two abortions. It does seem that Davis, down in the polls and with little left to lose, decided to double down on her core issue. O’Neill risibly rejected Schultz’s suggestion that politics were behind Davis’ decision, but did acknowledge Davis’ desperate political position.

Apparently, murder for causes other than self-defense is not polling well. What sane woman or man would support normalization of extra-legal and moral commissions of premeditated murder, and of the wholly innocent, too?

Safe but rare is the fallback position which acknowledges that only a minority are capable of adhering to a pro-choice doctrine without experiencing cognitive dissonance. Thereby sustaining a consensus of diametrically conflicting positions in principle and practice.

I hope Wendy’s 15 minutes will be over on election night. I’m tired of hearing about her. Just go away.

I think I said many months ago that Mommy Dearest Davis never stood a chance.

My biggest issue with Wendy is that she peaked too soon. Now she will not be able to suck as much money away from candidates that actually had a chance of winning.