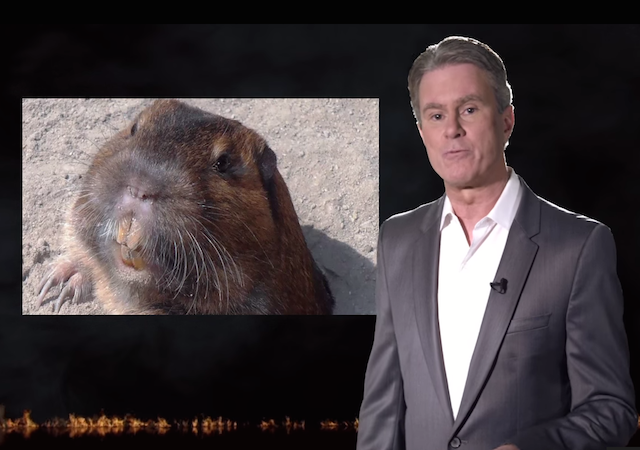 We’ve all heard stories about ridiculous government regulations passed in the name of “environmentalism,” but in some states, “regulatory action” has passed out of the reasonable and into the ridiculous.

In his latest episode of “Firewall,” commentator Bill Whittle lays out the case against restrictive (and possibly unconstitutional) environmental regulations that are currently plaguing residents of Washington State:

After fifty years of trying to eradicate the incredibly destructive pocket gopher, a small but exploding population of these pests lives and breeds in the innumerable shell holes and ground fractures caused by the Ft. Lewis artillery range. A subset of these gophers — of which we have no shortage – have been given endangered species protection by the US Fish and Wildlife Agency. Why give endangered status to a species that is in fact so out of control that it can only be called a pest? Well, because the males in this small sub-population apparently have larger-than-average reproductive organs. That’s not proven, by the way – merely asserted – but it was enough for the anti-growth, anti-human eco-weenie zealots in Thurston County to put draconian restrictions on what people can do own their own property in the name of protecting these fragile, delicate, large-membered gophers that were bred on an active artillery range. Since these are obviously conservative gophers the irony becomes almost unbearable.
…

Washington State now employs high-tech drones to photograph everyone’s private property several times a year, and high-tech software allows our aristocracy to determine if a peasant has had brush cleared, or a tree removed, deep in what used to be called that person’s “private property.” If any of these things have been done without a permit, large fines will be levied. You might think that this is simply because they want the permit money – well, they do, but that’s not the real reason.

The real reason is because you will take a knee to your insect overlords and you will be in compliance with their lunatic regulations. It’s not about the environment. It’s about money and mostly it’s about power. And while it may still sound funny, or trivial, or both – it’s neither. Glenn calls the phenomenon Gang Green and the Government Staff Infection. It’s the bludgeon of control and extortion under the fig leaf of ecology, and it is – as Glen so cleverly puts it – an infection. It’s a disease.

You can read the entire transcript here, via Truth Revolt.

As soon as someone has a fine levied, this sounds ripe for a federal lawsuit to remove the endangered status.

Everything Bill Whittle does is epic.

The best one(s), IMHO, are about the PC origins – from a while ago. The one called “Walking into Mordor” lays out how PC is destroying us, by design.

I live on a river and we’re knee deep in protected Canada geese. Have to push my way through them to get on the dock, they’ve become so domesticated here. No fear of humans here in de Holler.

I learned something a few years back when I visited a cemetery in Chicago.

There are commercial outfits that supply “goose dogs”. For a fee, you get trained bowsers to run off the geese. This is useful, because…pretty as they are…Cananda geese are poop factories, and there are LOTS of them who just stick in a given locale. They become pests.

Ya’all are put on heirs. You MIGHT live by a rile, but you don’t live by no reever…not in thatair hollar.

How you thank thet holler got cut out? You reckon rainfall run UP dem ridges? Naw, holler was by th’ river an’ a little thang called AROWSHUN.

how do you shun an arrow?
do you turn your back on it as its fired and say bad things about it to its friends?
this is important stuff, could save a life someday if we know the tricks 🙂

Norm’ly ah don’t lock t’ throw ’round mah superior edgicayshun, but arowshun got nary a thang t’ do with no arrows. Arowshun is ’bout how wind n’ rain will take a mountain down, a pebble at a time, over th’ course o’, gosh, decades ah reckon.

ah I see, in your redneckednes you messed up.
you ment erozzion.
no worryz Honry we is on the sam page now 🙂

I forgut to toss in a good ol mainer AYUH there 🙂

If you’re knee-deep in geese you must be at least waist-deep in goose shit.

A good beginning for a program of redress would be for City, County and State legislative bodies to cut the budgets of planning and land use agencies – and of their enforcement procedures – by 90 percent.

Unfortunately, Washington has been subjected to the ill-named Growth Management Act, which first and foremost was designed as a full employment bill for urban planners, and mandated that all these jurisdictions Must Have A Plan, and that each such Plan would stuff newly arriving residents into tightly prescribed Urban Growth Areas.

Not a plan devised by locally-elected jurisdictions, either. An unaccountable, State-appointed Hearings Board may overrule your local planners. This was a carefully-planned policy devised by blue-state politicians in Olympia – it’s an example of life under future blue-state autocrats, who have learned to separate the issuers of decrees from the votes of mere citizens who must obey them. Seattle’s light-rail system is governed by the same unaccountability principle.

I regret that Bill Whittle didn’t spend some time with this hideously autocratic legislation – the gophers and the private wildlife refuge were very small change in comparison. The private wildlife travesty is almost certainly a direct result of the GMA and planners engorged with undeserved power.

DINORightMarie in reply to Insufficiently Sensitive. | September 16, 2014 at 8:49 pm

Most state and local agencies are forced to do many of these things due to required compliance with federal regulations and mandates.

They lose federal funds if they don’t, face law suits, and hefty fines…….

(Mark Levin has been on to the EPA for years – the are a RICO racket, with the heft of the federales to back up their extortion. And, they have a super-clever sue-and-settle scheme they’ve been playing for decades to get our tax dollars into the leftist waco eco groups creating these faux “endangered species” and “protected lands” nightmares all over the country. His Landmark Legal Foundation has taken them to court often, and won! More of that, please!!)

The EPA was a Marxist org when it began, and is proving to be tyrannically “green on the outside and red on the inside.”

The ESA is in dire need of reform. Protecting rodents and other pests is simply idiotic.

When a nuisance species goes extinct, we should throw a party. The greenies recoil in horror at that. Which will make it even more festive.

Best estimate is that 99.9% of all the species that have ever existed are now extinct.

Extinction is not a failure, it is the norm, a feature, not a bug.

You’d think that the lady pocket gophers would do everything needed to assure that little sub-species flourished.

Must be a bunch of gopher feminist studies majors…

It’s a real cosmic Catch-22. Cooperation between humans, individually and in the groups we’ve historically assumed, has been naturally selected for survival, and thereby have we flourished. Unfortunately, this species-wide, generally held value has for the most part negated the action of natural selection on humans. The result is that a whole lot of people whose genes ought never have passed on are flirting with taking over the species. The Darwin giveth, and the Darwin taketh away. (Henry now ducks for cover).

You have whole swaths of the population who are too hateful of men to ever be reproductive…and certainly not of sons.

You have another clump who are not reproductive because they are just don’t swing that way.

I gotta figure on some happy, subtle level, that human-kind is benefited.

We can hope this turns the tide and eventually the math works out that there are no more people who, when you ask them what 2 + 2 is, reply, “well, that depends.” No. No it doesn’t.

Spare the desert tortoise and whack the bald eagle… abort/murder the unwanted human life. These people sound like a criminal cartel with morals to match.

Moving back to western WA after a 15 year stint in Cornville. Dad has told me about some of the wacky regs that seek to prevent eliminating pests. Like using a leg trap or plunging spike type trap to kill destructive mountain beaver.

If I remember what Dad said, the state-wide trap law passed thanks to the Seattle/King Co. vote where proponents ran a dishonest commercial depicting a 3-legged cat. It inferred the cat lost its leg to a leg-trap, when in fact it was surgically removed to treat cancer. Libtards swallowed it hook line and sinker and now rural residents can’t trap/kill pests. Or so I understand it.

The house is on the north slope of the Olympic range and security cameras regularly pick up deer, elk, cougar, bobcat and the occasional bear. The bobcat was photographed on Dad’s front porch. Coyotes aplenty are too skittish to venture near the camera.

The mountain beaver have torn up the yard pretty bad until they could be removed by an old family friend, who was a retired game warden.

Funny how many of the locals in Jefferson and Clallam counties refer to Sno/King/Pierce counties as “eastern WA” and Seattle as looney-land.

Sorry. That just slipped out. 😀

I understand the Seattle metroplex has been very successful bringing back the endangered Sea Hawks from extinction by nursing their little eggs in cast-off Berkinstocks and Ug boots. The stories are all over the moonbattery.

What brought back the Sea Hawks was NC State alum Russell Wilson.

So, an ornithologist then…???

These friendly little critters can best be treated by the Three S Method: Shoot, Shovel, and Shut up.

Environmentalists are power mad. They want to be the gateway, the deciders of who, if anyone, gets to expand, develop, build, etc. They’ve largely accomplished it by coopting our regulatory agencies.

As I maintain my short list of candidates for the WH in 2016, what they promise to do about fed reg agencies will loom large.

To paraphrase the famous Henny Youngman:

“Ever notice how social reformers want to force their conscience onto you?”

A lesson every “progressive social reformer” should learn from Henny Youngman.

“If at first you don’t succeed… So much for skydiving.”
― Henny Youngman