As if you didn’t already suspect it. 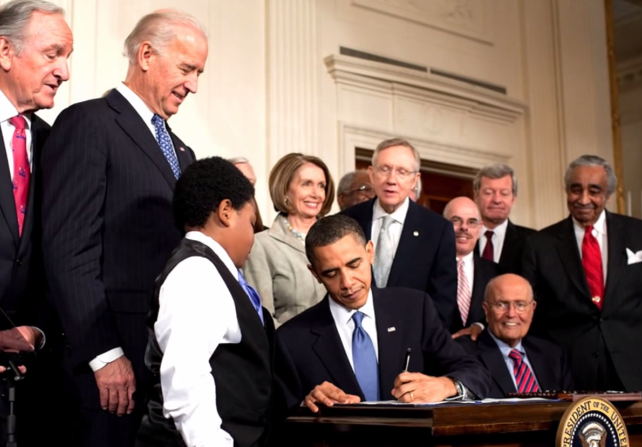 For all the times we’ve been told Obamacare does not fund abortion, a new GAO report proves exactly the opposite. Salon wrote this fantastic piece decrying anti-choice activists who bought into the Obamacare-abortion myth, and last night the Washington Examiner released their findings related to the GAO report and recapped the debate as follows:

A new GAO report shows that Obamacare is failing on these counts.

Warning of “bogus claims spread by those whose only agenda is to kill reform at any cost,” for instance, President Obama told Congress in 2009: “And one more misunderstanding I want to clear up – under our plan, no federal dollars will be used to fund abortions, and federal conscience laws will remain in place.”

The Examiner summarized the GAO report:

Customers in five states have no abortion-free plans available to them, and in many states, customers can’t tell which plans cover abortion and which don’t.

In Washington State, for instance, the state’s exchange bills customers on behalf of insurers–and the exchange covers abortion with federal tax dollars. The GAO found: “the exchange’s billing system was not assessing any premium to individuals whose premiums are fully subsidized under the law if these individuals are enrolled in QHPs that cover non-excepted abortion services.”

In other words, some customers with abortion coverage were nevertheless getting their entire premium covered by federal tax credits. No accounting gimmick can disguise that this is an abortion subsidy. State officials told the GAO this was a mistake they would remedy.

In fifteen other states, there’s not enough transparency to tell if this is going on. GAO wrote:

Fifteen issuers and the Washington Health Benefit Exchange… did not itemize the premium amount associated with non-excepted abortion services coverage on enrollees’ bills nor indicate that they send a separate bill for that premium amount.

In a conference call with pro-life lawmakers Monday, Congressman Chris Smith, R-N.J., said this indicates that abortion coverage isn’t being assessed differently, and is thus being subsidized through standard exchange subsidies.

Here’s the worst part: it’s impossible for consumers to escape insurance that pays for abortion.

Not only is Obamacare forcing taxpayers to subsidize abortion coverage, it is also making it impossible for pro-lifers to avoid buying abortion insurance–thus forcing pro-life people to pay into a pool that pays for abortions.

The Obama administration wasted no time batting back. The Washington Times reported the following:

The Obama administration said Tuesday it will make sure states and insurers understand the ban on using federal funds for abortion, but pushed back at Republican claims that a government audit report proves pro-life advocates’ worst fears about Obamacare.

No funds are permitted to cover abortions or administer plans that cover the service, as the Affordable Care Act requires issuers to collect a separate payment for coverage of the services, according to an official at the Health and Human Services Department.

Wow, you mean the Obama administration LIED to Americans about how Obamacare would really work? I am shocked!

Next thing you know, somebody will tell us that there is gambling going on in Vegas.

Yes, as usual for such scum, they lied.

Makes me want to start a FREE ERIC RUDOLPH campaign.

We had to pass it to find out what was in it.

In general, we’re not liking what we’re finding.

(If you are wondering that strange smell is sarcasm mixed with a sprinkle of cynicism.)

I pity those for whom the smell of sarcasm and cynicism is strange. These days, it’s the smell of reality and of freedom, lol.

Normalizing premeditated murder of wholly innocent human lives was a prerequisite to equalize the matriarchy. Since I don’t subscribe to the false myth of spontaneous conception, I cannot reconcile an extra-legal and moral right to commit murder for causes other than self-defense. I think 2 million lives terminated annually qualifies as a genocide. Pro-choice is a degenerate doctrine.

Well, I respect your belief in your superstitions. By all means, DO NOT HAVE AN ABORTION if that is how you “feel” about it. Other than that, it’s none of your BUSINESS what someone else does with their life. If they CHOSE to remove the unborn parasite from their body, that is their RIGHT! Don’t like it? Well, look up what it takes to get a Constitutional Amendment passed. Until then STFU.

Why are you lying now? Your bigotry at least had the dubious virtue of candor before you stated lying.

A human is never “parasitic” in any biological sense. Just as a calf is never “parasitic” on its mother. And a farmer or rancher never says his cows are “infested” when they are pregnant. They are “with calf”, because that’s all a cow can produce (normally, and absent surgical implantation). A mare is “with foal”.

Now, c’mon. Tell us what sparked this hate-twisted pathology in you? Maybe we can help.

Rags great response… and there are some more comparisons:

cats with kittens
dogs with puppies
Lions, Pandas, tigers, leopards, hippos… and the list goes on and on.

Not one of these animals kill their unborn. However, some will kill the young, such as the polar bear males.

Most carnivorous or omnivorous mammals CAN become cannibalistic when sufficiently stressed. Male bears are just BASTARDS… (They drink a lot, too.)

Male lions will kill off all the old dominate male’s cubs when they take over a pride, but that is a lion genetics thang.

You’re wasting your breath with these bloodthirsty babykillers. If you really want them to come to grips with what they are, send ’em an album of butchered second trimester babies. Invite ’em to go volunteer emptying the trash at their local human rendering plant.

But look at what he “argues” with. It’s all emotion and some crappy talking points someone packed into his skull.

And it’s all fallacy. “Parasite”…really? Resort to authority via the courts. And the canard that Roe can’t be reversed except by an amendment.

He’s all emotion, and no rationale. My guess is that he fancies himself a radical libertarian. I’ve asked his views on immigration, but he never answered.

Religious beliefs aside, it is morally wrong to kill the unborn. In fact it is murder.

Another lie from Obama.

Is anyone still counting?

I’m an atheist and believe the same – it’s morally wrong to kill unborn babies. I get there by a different path is all.

I arrive at that conclusion by reason and science.

A living karyotype with 46 chromosomes is nothing BUT a human…a member of the species.

It cannot be anything else.

I agree with both of you; it is wrong. Especially in this day and age, when there are EASY ways to avoid an undesired pregnancy.

I do have a problem imposing my opinion on others.
I would not do it (can’t anyways, male).
I would advise anyone I know against doing it.
I don’t want anyone using my(our) money to do it.
That’s as far as I can go.

you are not imposing your opinion on anybody.

Simply afford the unborn their humanity, and everything will be resolved by balancing interests.

Those people in the photo are living proof of just how useful abortion can be if performed on the right fetuses.