“We have a wartime vice president, and a peacetime president.” 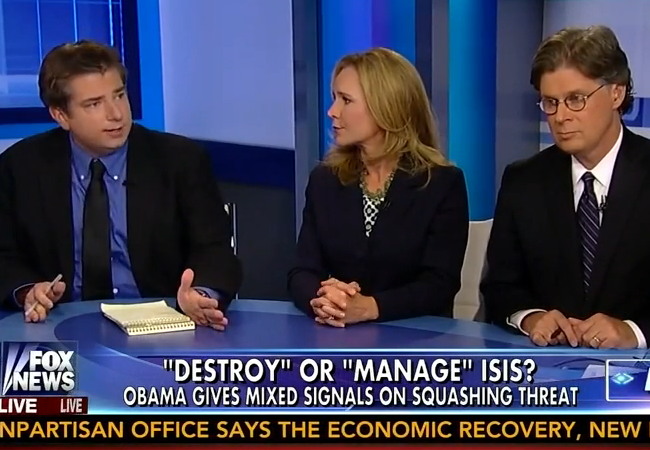 In the face of the threat presented by ISIS, President Obama and Vice President Biden are responding in ways that couldn’t be more opposite.

While Obama has said that ISIS is threat to be made manageable, Biden has been making fiery pronouncements about following them to the gates of hell.

This dichotomy was analyzed by the panel on Greta Van Susteren’s FOX News show Thursday night but it was Jim Geraghty of National Review who put things in perspective when he said:

We have a wartime vice president, and a peacetime president.

I had the pleasure of meeting Jim Geraghty at CPAC last March. He’s a very funny guy and an outstanding political analyst.

If you’re not already a regular reader, I highly recommend his blog The Campaign Spot.

It’s confusing because THEY LIE.

It is a planned part of their PLOY to CONFUSE.

FYI – very straight-forward, truth telling of what Obama has been lying about and doing the opposite on for the past few years. It’s all planned – not confusion.

WHO IS ISIS? WHERE DID THEY COME FROM? WHO IS BEHIND THIS? HOW IS THIS LINKED TO BENGHAZI? WHAT ARE THEIR GOALS? PLEASE WATCH THIS SHORT VIDEO

This whole ME deal is harshing Barracula’s mellow, dudes.

He literally does not want to do what needs to be done here, and that’s because it runs against a LOT of his Collectivist world-view and his soft-spot for Islam as a counter-weight to America’s bad, bad past (as he and the Collective fantasize and romanticize).

You can tell it by his anodyne language (e.g., “degrade”). You can “degrade” from HIGH up in the air with no risks.

You just can’t “win” that way. You can’t “defeat” ISIS that way. And they really, really NEED defeating…and in no uncertain, half-assed way. They need to be killed…HARD.

To boot, the entire facade to the narrative that Islam is Peace nonsense is utterly unraveling as the world watches ISIS rampage “for the sake and honor of Islam.”

The difference is simple: Old Hairplugs is kicking off his Presidential campaign, while The Annointed One is doing what he does best … dithering! He’ll take substantive action once he figures out how to organize the ISIS community.

President Obama and Vice President Biden are responding in ways that couldn’t be more opposite.

The noises are different, but the messages are the same.

Biden will put on his crazy uncle/yapping dog act, but nothing whatsoever will actually happen, and by this point everybody – the Russians, the Chinese, the Persians, the Norks, and all the Arabs – knows it.

Obama will act so laid-back that we’ll think he’s catatonic (except for the press, which will insist that he must be up to something terribly subtle and clever), but, aside from a few Dem fundraisers, some golf, and another horribly expensive vacation, nothing will happen. And everybody – the Russians, the Chinese, the Persians, the Norks, and all the Arabs – knows it.

Same old, same old. We simply aren’t going to see any new tricks from either of these dogs.

I think that Biden’s “war” stance has more to do with his future Presidential campaign than it does with any current desire to see [ISIS, ISIL, acronym-du-jour] being defeated.

Biden wants to be able to come out and say “well, I WANTED to send troops in and destroy ISIS, but I wasn’t President at the time. Barack made the call, and I followed it. But AS PRESIDENT, I promise that I won’t rest until ISIS is destroyed.”

Biden doesn’t want to have to pull a Dukakis in order to be taken seriously as competent and capable of directing the military on international threats.